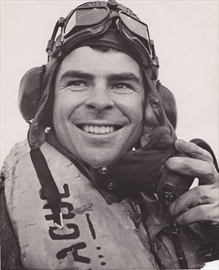 < = expand >
Survived the war. Both an RAF and RCAF pilot (401 Sqdn), he flew Hurricanes and Spitfires, and, was the first Canadian to test fly a Typhoon. Shot down on a mission near Boulogne France, he became a POW and played a role in the Great escape. According to the news (Hamilton Spectator -- reprinted here) article, he did not talk about the war other than some amusing anecdotes here and there. He certainly would have known many of the men executed for their role in the great escape of Stalag Luft III where 50 were executed after recapture.

F/L Sprague died on 30 April 2015 at the age of 99. He did his elementary flying training at EFTS Calgary, then moved to No. 1 EFTS Camp Borden on 1st Feb. 1940 and then to ATS at Trenton on 21 May. He initially joined the 112 (RACF) Sqn at High Post on 10 Sept 1940 and then No. 6 OTU in Sutton Bridge, Lincolshire on 21 Sept 1940 to convert to Hawker Hurricanes. From there No. 3 RAF where he served during the Battle of Britain. After the Battle of Britain he was posted to No. 96 (RAF) Sqn. at Squire Gate and then No. 1 RCAF (later 401) at Castledown. A brief stint with No. 56 at Duxford, he later rejoined 401 RCAF Sqn. in the famed Biggin Hill base. He was shot down while flying Spitfire Mk V serial # AD516 (follow the link below for this aircraft's history) and became a POW.

From the Hamilton Spectator article linked on the right (articles are reprinted in order to ensure their longevity).

"Henry Sprague was the scion of a prominent Hamilton family who served as a fighter pilot during the Battle of Britain and later helped plan the Great Escape after he was shot down over France and interned in a POW camp.

It was quite the experience for a young Canadian only in his 20s at the time, but his son Stephen said his father was very quiet about his wartime service, reluctant to talk about it other than anecdotes such as playing cribbage with Australian pilots in Stalag Luft III and watching the loser run around the camp barking like a dog.

He refused many interview requests, but did give a video interview in 1989 to the National Air Force Museum of Canada at CFB Trenton. The recollections turned up in the 2013 book The Great Escape: A Canadian Story by Ted Barris.

"He rarely spoke about anything he experienced during the war," said Stephen, 65, an award-winning Bracebridge cabinetmaker. "He had lots of funny stories and anecdotes, but I'm sure the vast majority of it was horrific. He gave up five years in the prime of his life."

He gave up five years in the prime of his life during that dust up over there.

His son said his father partly joined up because he "was absolutely amazed with flight." Stephen said he took his first flight in a plane in 1927 on Hamilton's beach strip. During the war, he served as a flight lieutenant and flew Spitfires and Hurricanes. He told his family he was the first Canadian pilot to test flight a Typhoon.

Another telling impact of the war was when he got back to Canada in 1945 after being a POW for more than three years. "He didn't show any desire to get back in an airplane," recalled Stephen. "I think he had enough. His flying days were over."

Henry Arnold was one of three children born to Willis Eaton and Victoria May Sprague. Sprague Sr. was an executive at the Canadian Westinghouse Co. plant at Sanford Avenue North and Myler Street. He attended Earl Kitchener Elementary School, Westdale Secondary School and McMaster University.

Sprague's name is on the Battle of Britain Monument unveiled in London by Prince Charles in 2005. He served with various squadrons after he arrived in Britain in 1940, both RAF and RCAF. He was a member of RCAF 401 Squadron, which was based at Biggin Hill, when his Spitfire was shot down by German fighters near Boulogne on Nov. 22, 1941.

The Great Escape has been immortalized in the 1963 film starring Steve McQueen and Richard Attenborough. The plan was for about 200 POWs to escape Stalag Luft III through a tunnel. The operation was launched on March 24, 1944. Seventy-six got out before the Germans stumbled on to the escape and shut it down. All but three were recaptured and 50 were executed by the Gestapo.

Stephen said his father saw the movie. "He thought it was OK," he said. "It was a Hollywood version, of course."

Sprague had a few roles in the escape. His son said he helped spread dirt from the tunnel around the camp compound. Barris' book said Sprague was on hand for the opening up of Tunnel "Harry" — three were dug in total — and that he and another man named Pat Langford assumed the task of protecting its trap door.

Stephen said his father was to be the 150th POW through Harry, but he knew his chances of a long breakout were slim because he didn't speak German. He said his father believed the main reason they were able to pull off the escape is because their Red Cross packages had chocolate and such and they were able to bribe the guards "to get stuff they needed to forge documents and make up clothing."

After his return, Sprague married his sweetheart Harriet, who was the daughter of Hugh Hilton, the president of Stelco. He went to work at Westinghouse as a clerk and engineer and retired in the late 1970s. He and his wife loved spending the summer at their cottage near Port Carling in Muskoka.

Several years ago, Stephen was at a museum in Ottawa and, while watching an old newsreel of a fighter pilot getting his wings from Air Marshal Billy Bishop, he immediately realized the man was his father.

"My dad was just a bit player (in the war) compared to a lot of other people, but as far as I'm concerned he was a hero," added Stephen.

Book - Men of Battle of Britain