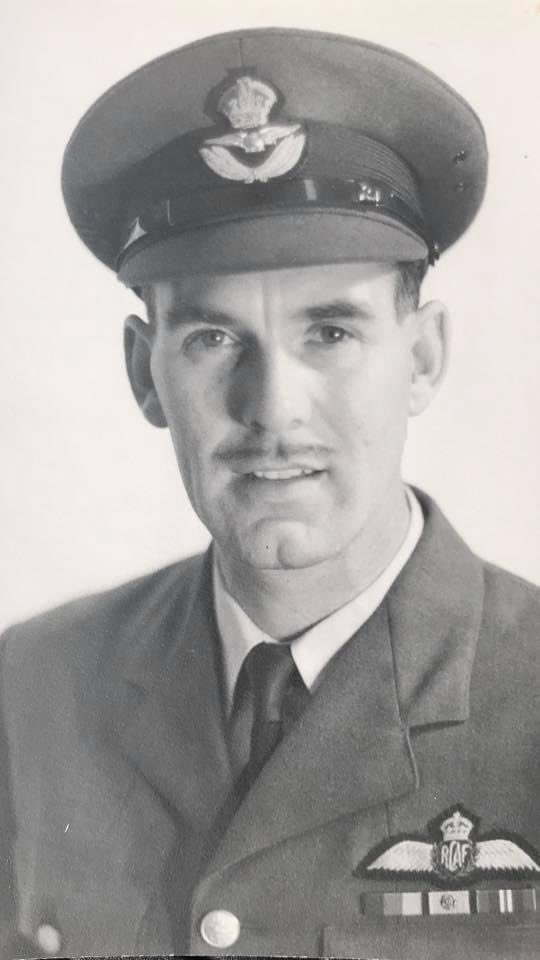 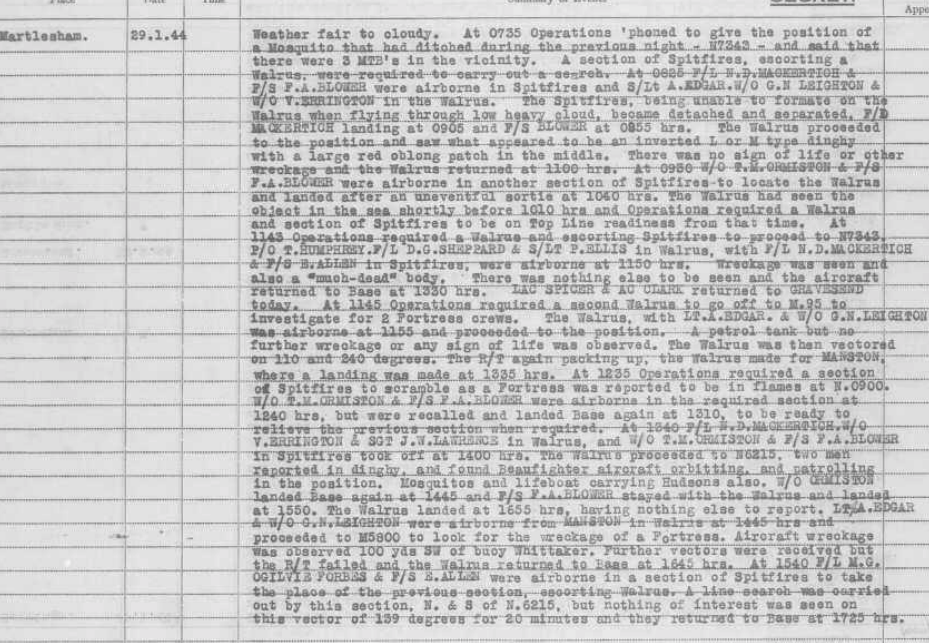 W/O Allen was initially in 277 Air Sea Rescue Squadron. Later on in the war, he flew the Typhoon, following the allied advances.

In reading through the ORB (Operational Record Books) online at the UK's National Archives, some details of E. Allen's sorties were available. Spitfires (older marks) were sent out to search for downed airmen or escort bombers back to base, often in bad weather. Sometimes, a pilot would radio in over the channel indicating low fuel, so Spitfires would be sent out as a precaution. Many times, a section (two) Spitfires, with back-up Spitfires ready to go -- would find nothing, or perhaps a balloon instead of a reported parachute. Other times, an airmen would be found and rescued by a Walrus flying boat, which the Spitfires would provide top cover for after circling a location to help the Walrus locate a dinghy with an airmen. One one occasion, a dinghy was dropped but no attempt to get in it would be noted, and this would indicate a fatality. Flying out of Martlesham in 'A' Flight, Sgt E. Allen was very busy in 1943 and 1944 in 277 Air Sea Rescue Squadron.

As the serial numbers to the right indicate, the 277 pilots flew in older marks (IIa) which would be no match for a more up to date Me 109 or Fock Wolfe fighter, should one appear. It was very dangerous work and the notorious English weather was no help.

Ernie Allen turned 100 years young on Jan 14, 2022, celebrating at the Wildpine retirement home. The Stittsville (Ottawa area) Central newspaper had this quote about him.

"Born in Manchester, UK, Ernie was a World War II Veteran, having flown a Spitfire for the UK Royal Air Force over the English Channel, the Air Sea Rescue, to keep those being challenged by enemy fighters safe. He also was in the Korean War. When in France and Germany he flew the Typhoon, “a plane that could do anything”, he said. I asked him if he ever shot down a plane and he quickly said, “No, I was there to save others, I patrolled the English Channel”. I asked him when he knew he wanted to be a pilot to which he responded, “at seven I just knew I wanted to be a pilot“. At 19 he got his RAF wings and never looked back.

Ernie got married in 1942 to Winnifred, the love of his life. After WWII, they initially came by ship to New York where Ernie had hoped to join the US Air Force, but it was not to be as he was not an American citizen. He heard that his chances would be better in Canada, so off to Canada they drove, to Ottawa, and Ernie enlisted with the Royal Canadian Air Force where he was a flight trainer during the Korean war. A time he remembers fondly, “I’ve enjoyed my years with the RCAF and I have many good memories”.

The Ottawa Citizen (see link right) had this to say quoting him about his war-time experience;

At three years old, Allen was outside running, kicking a tennis ball to play soccer, a sport he played competitively into his 40s. As a youth, he loved to run through the forests near his home in Manchester, England.

Then came the Second World War and Allen switched from running to flying, piloting the famous Supermarine Spitfire fighter with the Royal Air Force. From his aerodrome near London, Allen and his mates in 277 Squadron flew low over the English Channel searching for downed allied airman, radioing the location to search and rescue teams, then circling overhead to protect the rescuers from attack.

It was dangerous work.

“All you’re worrying about is staying alive,” he said of his war experience. “It’s a very selfish business.”

One brush with death came when a German V-1 rocket hurtled past his cockpit, barely 10 metres away. The Germans were launching the unmanned bombs toward England around the clock. Each one carried more than 800 kilograms of high explosive.

“I’d just taken off,” Allen recalled. “I was at about 200 feet. I was just pulling over to get into formation with my leader and this thing came out of nowhere,” he said. “It just missed me.”

Later in the war he switched to flying the Hawker Typhoon, a fast and powerful fighter-bomber. Armed with eight wing-mounted rockets and 20-mm cannons, the Typhoons attacked enemy tanks, trains, vehicles and other ground targets.

“We would head down from 5,000 feet, diving straight down to the ground,” Allen said. “The Typhoon was fast. We used to cruise at 300 mph and by the time you’re getting close to the ground you’d be going pretty close to 500 mph and there’d be people shooting at you. We’d fire our rockets, then pull up, one behind the other, eight of us, and we’d rejoin at 3,000 feet and then make another pass with cannon fire.”

Citizen Article on his 100th Bitrthday

Stittsvillecentrail.ca article on his 100th

am tagging this pilot Sgt E Allen as 'unsolved' as require DOB, date joined, and, any further history such as where he trained (details), when he first flew with ASR (was it the flights noted above in 1943) and, any other detail e.g. how many pilots found (alive) / spotted and generally, how many bomber groups escorted back.
reply
post