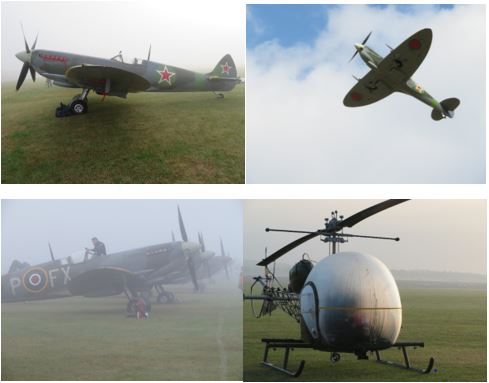 These days it's not often I get up early, but at sunrise I watched as Saturday 18th September dawned with the sky painted a mixture of pastel blues and pinks, criss-crossed by brilliant white con-trails hinting at a return to post pandemic normality. As did the return of the Duxford Battle of Britain Air Show which is where I was heading at this ungodly hour in the morning.

This year’s show was certainly up to the high standard of those prior to the pandemic which caused last year’s postponement, although it felt like the attendance numbers were down from previous years, which actually gave a much more relaxed feel and space to stretch out.

The sounds of the 1940's were re-created by the Cambridge Swing Band with a bass section of Rolls Royce Merlins adding to the atmosphere although it was somewhat surreal to hear 'It Don't Mean a Thing (If It Ain't Got That Swing)' punctuated by pyrotechnic explosions and machine gun fire. The sights of the 1940's were provided by re-enactment groups who portrayed the smoking, tea drinking and nail biting that came with the "hours of boredom punctuated by minutes of sheer terror" which was air combat in that and other eras.

However the real stars of the show are the aircraft. And there was a good showing from Spitfires and Hurricanes, and from American fighters (Curtiss P-40F Warhawk, Grumman F8F-2P Bearcat, Goodyear Corsair FG-1D and North American P-51D Mustang), the Catalina flying boat and the B-17G Flying Fortress the 'Sally B'.

In addition it was nice to see helicopters contributing this year, with an Agusta Bell Sioux, and a quartet of Westlands, a Scout, Whirlwind, Wessex, and Sea King adding to the displays.

But my favourite aircraft this year was the newly completed restoration of Spitfire IX (PT879), the Russian Spitfire, one of over 1300 Spitfires sent to Russia. After colliding with another Spitfire, it had crashed on the Kola peninsula and had been stored by a farmer hoping that one day it would be worth something. In 1997 it was rescued and transported back to the UK and after a period of time eventually restored to flying condition. With a deliberately rough Russian paint scheme painted over RAF roundels it took to the skies again on 28th October 2020.

The air displays as always were superb with Spitfires, Hurricanes, Mustangs and Buchons as well as a segment of replica First World War filling the skies with simulated aerial combat sequences.

So once again the sights and sounds of the 1940's echoed around Duxford and I left with a warm glow of contentment (or maybe just a touch of sunburn) and headed back towards a perfect sunset.
post comment