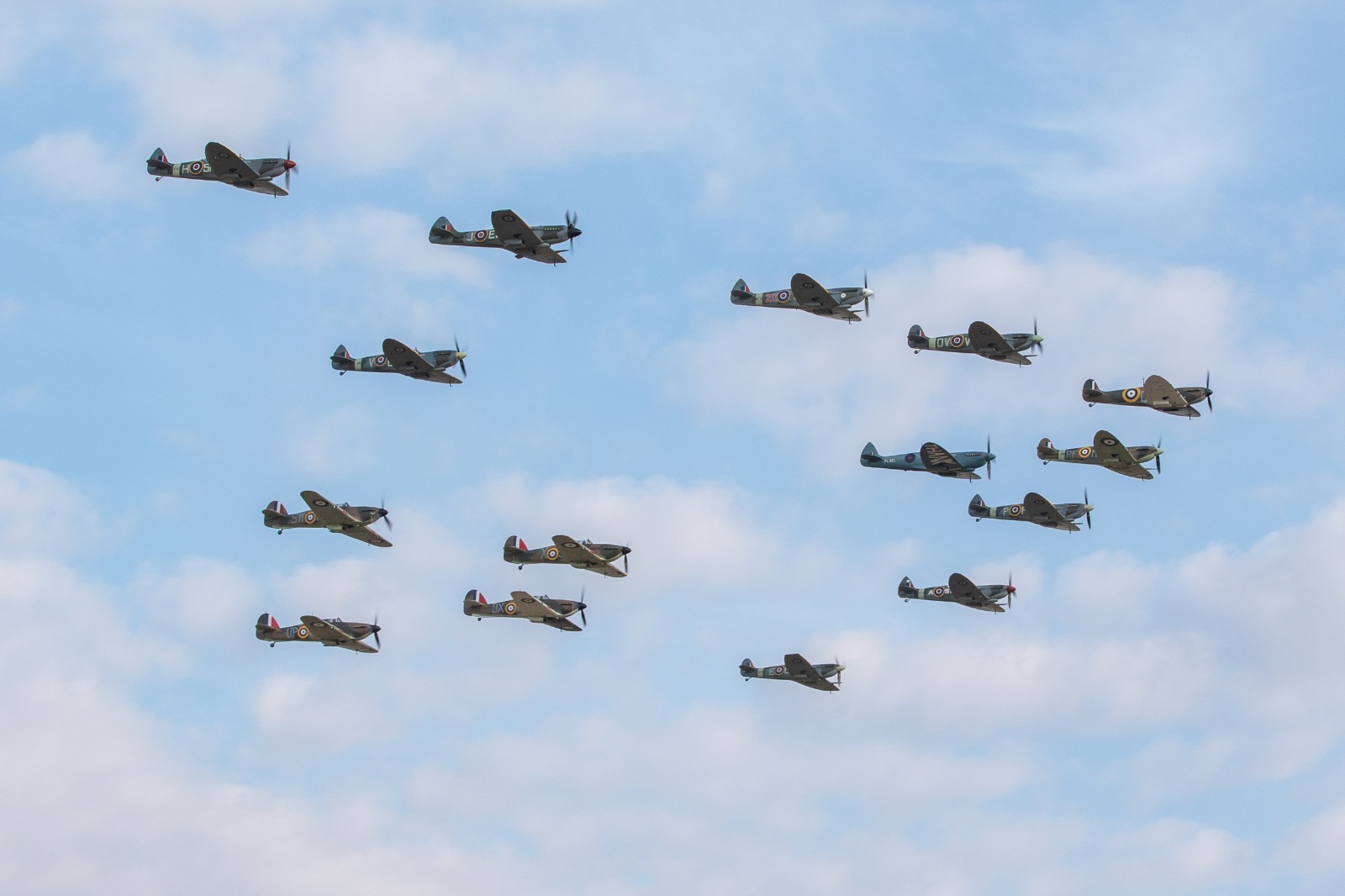 Allspitfirepilots.org will be at the show again for the full two days covering the events, aircraft, people and the special finale featuring the stirring sound and sight of many Spitfires as they take to the skies. Our chief editor and lead researcher Kevin Charles will be on hand, stop by and say hello.

Here is the full description for the upcoming event scheduled for Sept 10 and 11, it's going to be a good one, and we hope to see you there.

The world’s only two-seater Hurricane and airworthy Bristol Blenheim will join the famous flying finale of warbirds at this year’s IWM Duxford Battle of Britain Air Show. With plenty of Spitfires (20) and Hurricanes confirmed to take flight and a showground packed full of historical and 1940s entertainment, this annual event pays tribute to those who defeated the German Luftwaffe for control of the skies over Britain at a site where real history happened.

Other must-see aerial displays over the weekend include the much-loved Boeing B17 ‘Sally B’, the last airworthy Flying Fortress in Europe; a visiting display from the Battle of Britain Memorial Flight; the P-51D Mustang 'Miss Helen'; and the Tiger 9 Aeronautical Display Team, amongst many others and with more flying acts soon to be announced. Across the showground, the summer of 1940 can be seen and heard at every turn as jazz, blues and swing music fill the air, living history groups recreate life on the home front during the Second World War and a traditional steam fairground delights families with classic rides. Visitors can also enjoy access to IWM Duxford’s exhibitions and hangars throughout the day, packed full of aircraft, vehicles, collection items and personal stories of war and conflict.

IWM Air Show Event Manager, Phil Hood, said “This year’s Battle of Britain Air Show is set to be a memorable one with a fantastic array of Second World War aircraft participating in the finale flypast, a site which never ceases to capture audiences as Spitfires and Hurricanes take to the sky in unison to close out the event. What makes this Air Show so special is its connection to the history of Duxford which visitors can explore during their visit and find out more about the men and women who worked at RAF Duxford to help secure some of the most important victories in the skies. The Battle of Britain Air Show gives us the opportunity to commemorate these efforts whilst delighting audiences with aerial displays and history packed entertainment on the ground.”

In addition to the Air Show, IWM Duxford will also be commemorating the Battle of Britain with the following:

Duxford In A Different Light: Battle of Britain Photography Evening - taking place on 15 September, known as Battle of Britain Day, this after-hours photography event is dedicated to this pivotal moment in 20th century history. Using innovative lighting techniques, Second World War and Inter-War aircraft will be illuminated to create evocative photography opportunities and scenes will be brought to life with the help of period vehicles and living history actors dressed in authentic period costume, all against the backdrop of Duxford’s historic buildings.

IWM In Conversation: Battle of Britain – on 17 September, come and listen to fascinating lectures from IWM curators, Adrian Kerrison and Craig Murray, as they delve into the history of the summer of 1940, including Duxford's controversial Big Wing and its contribution to the Battle of Britain and the development of The Dowding System. Author of The Forgotten Few, Paul Beaver, will pay homage to the overlooked efforts of 57 naval pilots who flew in the Battle of Britain, whilst historian Victoria Taylor will re-tell this iconic British victory from the Luftwaffe's perspective.

The Battle of Britain: A Visual History by Anthony Richards, - out 8 September 2022, this new highly illustrated book brings together multiple elements of IWM’s collection, many of which have rarely been seen before by the public, to explore one of the most testing periods in Britain’s history and the stories of the individuals who witnessed it all, on the ground as well as in the skies.
post comment