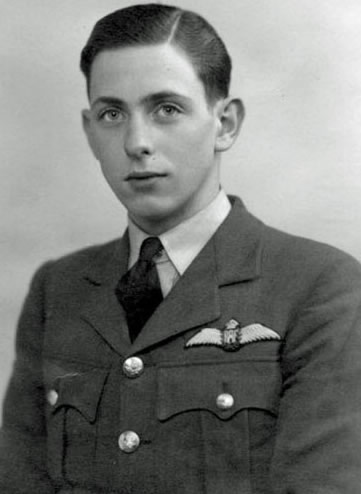 < = expand >
Henry Collingham Baker was born on 19th May 1920 at Clowne, Derbyshire and was a pupil at Kings College, Taunton. As a candidate for a short service commission, Baker began his flying training at 9 E&RFTS Ansty on 25th July 1938. After an induction course at No. 1 RAF Depot Uxbridge he went to 9 FTS Hullavington in September.

With his training completed he was posted to No. 1 Electrical and Wireless School, Cranwell in May 1939 as a staff pilot. After a spell with 616 Squadron at Doncaster from 19th September, Baker went to 12 Group Pool Aston Down on 17th October and after converting to Spitfires joined 19 Squadron at Duxford on 15th December.

Over Dunkirk on 1st June 1940 he shot down a Me110 and damaged another. After being involved in a car accident Baker spent two months in hospital. Fit again, he was posted to 41 Squadron in late August 1940 and flew his first operational sortie with the squadron on 14th September.

On the 15th he shared in the destruction of a He111 and damaged another and on the 30th he claimed a Me109.

With his tour completed in late July 1941, Baker spent the next six months instructing at 51 OTU Debden and later 52 OTU Aston Down.

After a period in hospital, followed by a convalescence at Torquay, Baker was posted to a fighter squadron in the Western Desert in May 1942.

In December 1942 Baker returned to the UK and in January 1943 he went to RAF HQ Northern Ireland as OC Tactics and Training. In April he became an instructor at 55 OTU Annan, Scotland but in May went to Gibraltar to take part in ferrying 300 Hurricanes to Cairo. New pilots took them on to Teheran, where they were picked up by Russian pilots.

Back in Britain in July 1943, Baker was posted to 118 Squadron at Coltishall as a supernumerary Flight Lieutenant. In January 1944 he was based at Croydon as a ferry pilot and in March he went to CFS Montrose for an instructors course, following which he went to Wrexham as CFI.

Baker's next posting, in January 1945, was as CGI at 17 FTS Cranwell and after another ground job at RAF Kimbolton later in the year, he was released from the RAF on 1st January 1946 as a Squadron Leader.

He worked on a tea estate in Ceylon and for the Peruvian Central Railway, returning to the UK in 1953 and developing a business career, particularly in shipping. He became a company Managing Director.