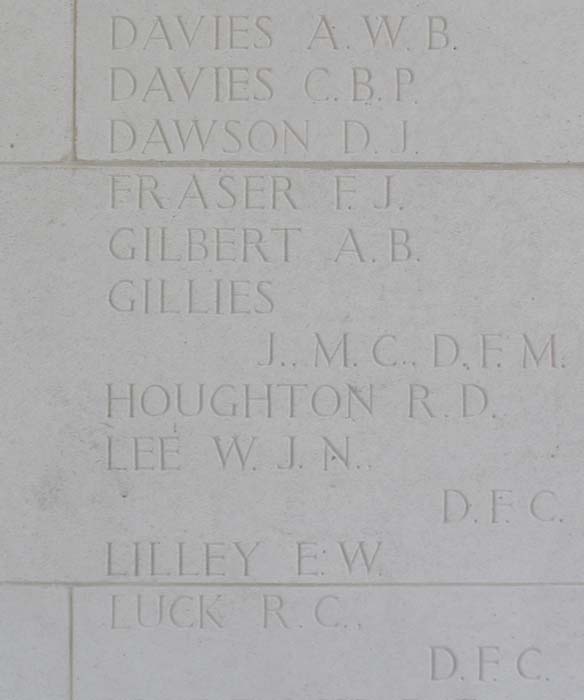 < = expand >
James Gillies joined the RAF about March 1935 as an Aircraft hand but later applied for pilot-training and was selected. He joined 602 Squadron at Westhampnett on 18th September 1940 as a Flight Sergeant.

He shared a Ju88 on the 21st, damaged Me110's on the 24th and 25th and destroyed one on the 26th. Gillies was posted in early October to 421 Flight, then being formed at Hawkinge. On the 17th he crashed in a Hurricane on landing after a combat with Me109's, injured. On 7th December he chased a Domier to the French coast, with another pilot. Their attacks probably destroyed it. Gillies ran out of fuel on the way back and crashed 421 Flight's special blue Spitfire just short of Hawkinge.

On 19th December he probably destroyed a Do17 near Cap Gris Nez. On 11th January 1941 421 Flight was re-numbered 91 Squadron. Gillies was on a reconnaissance patrol on 11th April when he saw a He115 floatplane being towed by an 800-ton tender, near the coast of Cap Gris Nez. He returned to Hawkinge, reported the incident and later escorted a section of fighters to the area. Despite bad visibility he located the tender and then participated in the attack which resulted in the floatplane being destroyed and the tender severely damaged. Returning to base, Gillies engaged and destroyed a Me109. For the day's activities, he was awarded the DFM (gazetted 30th may 1941). He destroyed another Me109 on 18th September 1941.

Commissioned in November, Gillies was posted to 615 Squadron at Fairwood Common in February 1942 and went to India with the squadron in March. He is believed to have destroyed two Japanese aircraft on 29th May 1943. Later in the year he went to 79 Squadron, as a Flight Commander.

On the night of 27th March 1944 Gillies, with a small patrol, penetrated into a Japanese ammunition dump at Indaw, Burma. After he had rejoined the main force, he explained to the RAF the layout of the dump area. Gillies also arranged to indicate the target for the bombers. On 4th April he flew as a passenger in a light aircraft and placed smoke bombs around the target from a height of 50 feet, enabling the bombers to attack the dump area with great precision. For this operation, Gillies was awarded the MC (gazetted 13th February 1945).

He was killed on 21st April 1944, when he was shot down, possibly by anti-aircraft fire. Gillies was 29 and is remembered on the Singapore Memorial, Column 431

Foster-son of William and Janet Gillies, of Intake, Yorkshire.