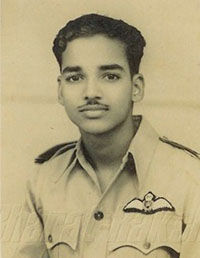 I was able to ask a number of questions directly to Mr. Balan through his daughter, who was very kind in phoning her father in India to obtain the answers. Mr. Balan looks very young in his service pictures, and, apparently is doing very well at 93 and fondly remembers his flying days, and we thank him for sharing some of his stories. He was extensively interviewed on the www.bharat-rakshak.com web-site (links are on the pilot page for Captain Balan), where lots of detail can be found on his early flying days, EFTS training, and deployment to Japan where he flew the clipped wing Spitfire.

Although he wasn't in combat, flying was dangerous, as they flew for extended periods over water, over low mountains, in bad weather, in training dives (black out possibility), and, take-offs side by side fighting off immense torque by the Spitfire airscrew, applying full rudder to get in the air without incident. I loved his quote when I asked about what it was like to fly in a Spitfire and he said he felt the props were being "dragged across the sky by many dragons".

Captain Balan flew as part of the July 4, American Flypast over Tokyo Japan, in 1947. He went on to a career in civil aviation, raised a family, loved photography and poetry, and, shares some of his memories with us now.

For his listing on this site, and, for some answers to some of the questions asked of him via his daughter, please see:

I really enjoy hearing from the children and relatives of former Spitfire pilots, regarding their service and post-war years if they did survive, and, we're very pleased to have Mr. Balan's story become part of this site, along with other pilots from the RIAF who served, fought, and died during the WWII years.

Thank you so much for all the time and effort you put into creating the page and blog post regarding my dad, Capt. M. Balan ( Muthukumarasami Balan), Kurt. Deeply appreciated!
Warm regards,
Bhuvana Chandra
reply