Look up pilots on the site by Squadron number! (NEW FEATURE) 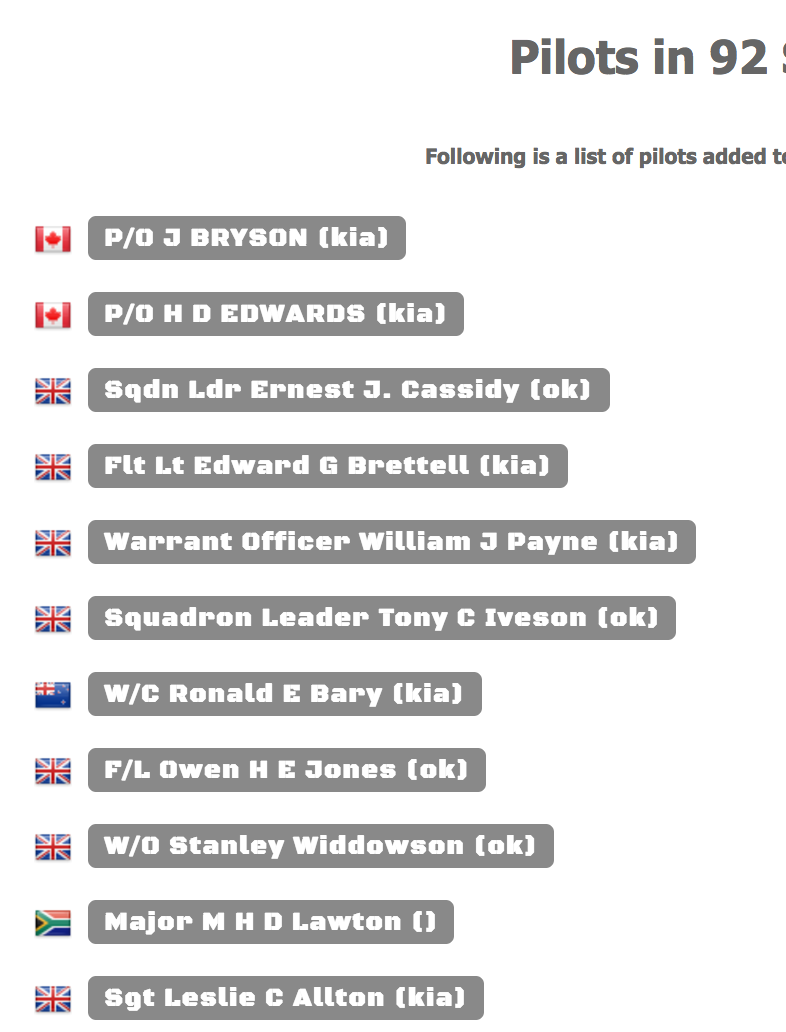 Greetings, as we head into fall -- a number of new features are being planned for the site. You may have already seen a few. For one, the squadron numbers and serials flown sections of a pilot page have been given more room, and, soon, more information (incident report) will be able to be added when adding a date / serial no in the pilots 'aircraft flown' section. That will move the site closer and closer to showing ORB / logbook details.

But one feature that was very simple to add, and, potentially very useful -- was a recent change to hyperlink the pilot's squadron number on the pilot page to go to a page that lists all other pilots having the same airforce / squadron identification -- and so far, the results are fascinating. For example one of our users (Kevin Charles son of Spitfire pilot) has been diligently adding pilots from 92 Squadron and other squadrons of 244 Wing during a particular date range primarily operating out of Italy. As a result, a lot of squadron pilots are showing up on the site, and now those that flew as part of a particular squadron can be seen on one page. From there a user can click the pilot's name to go to their page and see all the detail on the pilot, including all the squadrons that pilot flew with. Ideally users have more to add for pilot pages, this site functions as a wiki in that regard and links to other sites with further detail are always welcome, along with images, and, of course Spitfire serial numbers flown.

So for example, here's the page for Squadron 92 pilots. Readers should remember that these lists depend on users adding more pilots, and importantly, filling out squadron numbers and dates. So even if you don't have aircraft serials, the squadron numbers help. Try to just add a number rather than overload the field with text (it's easier on our search).

One thing that's evident when you look at different squadron pages (we'll add more features to the squadron pages over time, and link to sources elsewhere) is how multi-national the squadrons were. Pilots from all over the world not just the UK; Canada, USA, Poland, Czechoslovakia, France, South Africa, Holland, Belgium, Norway, Finland, India, Brazil, Australia, NZ : the list goes on and on.

Hi everyone . I'm looking for any information about Flying Officer J. E. R. Locke from 417 RCAF Squadron . He went down in Italy on August 10 1944 and spent 11 weeks with Italian Partisans until he went back to his own lines .My cousin in Italy says that there was a Canadian pilot who stayed with the Partisans in north west Italy about that time . He didn't know who he was but I think it could be Locke. There are some parts of his old Spitfire Mk VIII that was recovered by an aircraft archaeology group .I just like to know if he's the pilot in question . Any help will be greatly appreciated . Thanks
reply
by: Henry Private 2021-02-07 10:44:35

Gordon Brettell:- https://en.wikipedia.org/wiki/Gordon_Brettell was one of the fifty shot by the Gestapo after The Great Escape.
reply