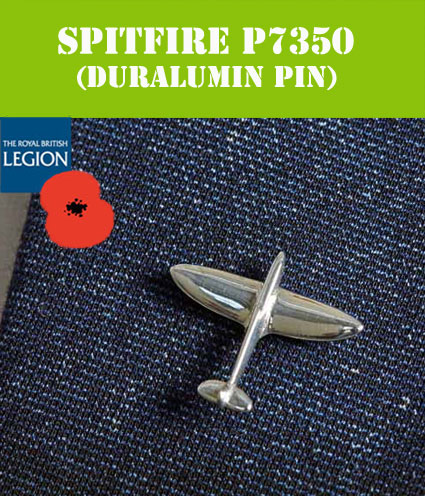 My father recently asked me to drop by a few days before his own birthday, pointing to a small brown box that had come in the mail. He said, "it's for you". I curiously opened it and found myself in awe as I looked down at a beautiful Spitfire pin made from Duralumin fabricated metal, from the original P7350 that flew in the Battle of Britain. Wow! I had never seen this type of thing before, and, here in my hands was a part of flying history. I also wasn't sure how I became the recipient of a gift on his Birthday but there it was.

The 18mm wide (wingspan) lapel pins are sold by the poppyshop.org.uk, in support of the efforts of The Royal British Legion. All purchases made from the Poppy Shop help to fund the work of the Legion, providing practical support and advice to Service personnel, past and present, and their families. It's a great cause. The pin comes in a jewelley box, with a small certificate explaining the pin and where it came from.

So out of the blue - perhaps in more ways than one - a symbol that has become an icon for Britain itself and the cast of allied pilots and ground crew, had become very real for me. This web-site after all is a collection of virtual artifacts. But here in my hands was the icon itself. The British Legion through it's efforts at poppyshop.org.uk is as relevant today as it was back then in helping UK veterans and Service personnel adapt.

You can see a direct link to the pin at poppyshop.org.uk/spitfire-p7350-lapel-pin which says;

"Each miniature Spitfire has ‘TMB’ and ‘P7350’ cast into the underside of the wings, in verification of the historic metal of which it is made. Presented in a very high quality wooden case with certificate of provenance. These Pins are entirely hand crafted and finished in England."

P7350 flies today as the oldest airworthy Spitfire, having originally flown in the Battle of Britain directly after it's 1940 manufacture. When it was later restored, some Duralumin parts were removed, and, thankfully turned into these remarkable items. Do you have a picture of P7350 in flight, if so, feel free to add to the collection at the page we maintain for P7350.

Bill, thanks again for this gift, you'd think it was my birthday not yours! I would like to point out that the Canadian www.poppystore.ca also also has an online store in support of it's programs as does many other legions around the world.

I have three similar items, made by my father during his WW2 time in the RAF. Dad (a lowly LAC) was a flight rigger and at one point tended to the aircraft of S/L Robert C Dafforn DFC while at 52 OTU Aston Down.

The first is roughly the same size as yours, but in my case formed from a folded copper penny and chrome plated (I don't know how he managed to arrange for the plating).

The other two are from an aluminium alloy that he was told had come from a Luftwaffe fighter aircraft propellor. He never saw the plane or the propellor so I suppose analysis may be the only way to establish the metal's origin. The piece was big enough to make two models, each about 50mm wingspan. One piece was fashioned into a Spitfire and the other, a Hurricane. The Hurricane piece as not quite large enough so dad fashioned a separate spinner and fixed it on (somehow).
reply