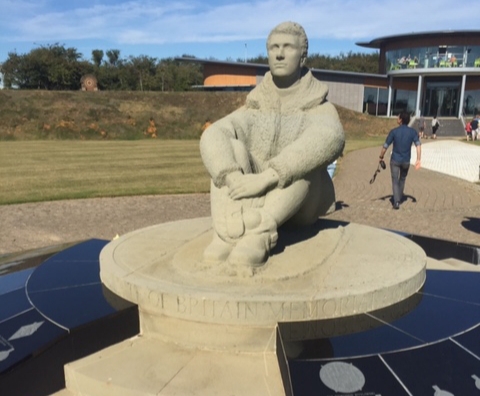 An evening in Folkstone gave way to morning and a short bus ride up the cliffs of Dover, in anticipation of the Battle of Britain Day memorial service, complete with Spitfire flyovers, wreath laying by service veterans, and, a prayer service. All of this in front of the stone sculpture of a pilot (no rank, on purpose) at rest on the ground staring up into the sky, perhaps as a pause or in thought, maybe waiting for the next scramble. But either way, he's stood down -- and represents all those who fought in the Battle of Britain -- the fight over, even as today we are taken back to that desperate and deciding day on September 15 1940, when wave after wave of enemy bombers and fighters were met by the British Hurricanes and Spitfires. The Spitfires after the top cover 109s, the Hurricanes largely directed at the bombers. This penultimate day represents the whole of the Battle of Britain now as we reflect on this historic summer of 1940.

Close to 100 Canadians served in the battle, which included Spitfires, Hurricanes, Defiants, and other aircraft. I met Kevin Charles (now senior editor of this site and son of Spitfire Pilot Alan Charles). Kevin will be at the 2019 IWM Duxford show, hit him up for a t-shirt, he's armed with lots of t-shirts with a selection between our two designs).

Kevin and I sat on the upstairs cafe at the museum and by the way, this is a first class facility, with a unique architectural design in the shape of a Spitfire wing. Each side of the wing building has display rooms, and is open to the public. The upstairs cafe facing the Channel and France, visible on a clear day. And what a clear day it was, with clear blue skies this September 15, 2019. We heard the Spitfire before we could see it, flying out of Biggin Hill, it circled the memorial several times over the next hour or two.

We walked down to the sculpture for 11 a.m. when the service began, it was reflective, and, apart from the prayers offered by a local vicar, had a lowering of the banners facing all the squadron emblems on the apron of the sculpture. Milling about afterwards we chatted with one of the banner carriers, a veteran whose father and grand-father served in the world wars. Tom Gurney spoke of being a boy during the battle of Britain and watching the downed airmen float down in their parachutes to the sea, to be picked up by circling patrol boats. These allied airmen would now be members of the Caterpillar club, and, a few, the Guinea pig club. These designations being a light and humorous way of throwing off the mortal danger faced in air battle every day by these young men.

Closer to the cafe / wing, a memorial wall, not unlike the Vietnam Veterans memorial in Washington, with the name of every Battle of Britain veteran inscribed. Names are still being added. Kevin and I recognized some names, many of which are on the allspitfirepilots.org site. A number of wreaths from different countries, but none Canadian, so I left a Canadian RCAF shoulder patch at the base of the wall. Wing Commander Andrew Simpson was on hand to give us a private tour of the site, mentioning some of the highlights, and, details. This is a beautifully designed memorial and grounds, looking out over the Channel. At a cost of millions of pounds, it was (and is) entirely funded by donation, and yet, I've rarely seen such a complete and thorough memorial venue.

One can see France and it's not that far away, it's easy to imagine just how fast the fighters had to scramble, many times a day. This experience awaits you in one of the wings of the museum, with a wall to wall video and sound that is about as close (loud) to the sound of the actual aircraft you can get. The scramble and battle experience has been approved by the veterans who fought, this really is a must see -- I consider the entire Capel le Ferne site a must see pilgrimage by any Spitfire, Hurricane, or Battle of Britain enthusiast.

If you can go on September 15th, all the better -- but there is so much to see, and I think the less busy it is perhaps the more meaningful. The interactive displays including the touch screen map of all groups / airfields, with deep dive details is impressive. The whole museum has an aesthetic of clean lines and easy to navigate information that in some ways, mirrors the clean and beautiful design of the Spitfire itself. This day was a highlight, and the walk along the footpath back to Folkstone seaside gave plenty of views of the cliffs of Dover. By the way it seems to be a continual party down at the old harbour Folkstone where several pubs open to the street and the dock itself host rock bands.

As I walked to Folkstone, looking back, one can imagine the fighters zooming up and down along the cliffs, engaging the enemy eagerly in order to save London and other strategic ports and airfields. The battle was won, and, England was not invaded as Hitler was so eager to do. That one week break where Hitler directed his wrath at London was critical to the RAF restoring it's airfields and squadrons for the final air battles. Citizens of London paid the price and thus share in the air victory.

The few (English, Scottish, Irish, Polish, Canadian, Czech, Slovak, American, French, Australian, New Zealand, South African, and many more), they did their job, they did it well. Often with 15 or less hours in a Spitfire or Hurricane before operational in battle, the new pilots went fast, the lucky survived and tended to go on -- some served throughout the entire war -- some going on to become wing commanders. Many however, gave their lives in battle or in training, and, many more still, bore the scars of battle for the rest of their lives. It's these "few" as Churchill describes, and, their commanders, ground crew, WAAFs, ATA pilots, with the whole world looking on, that saved Britain and perhaps the world.
post comment