IWM Battle of Britain Airshow 2019 - All the Highlights! 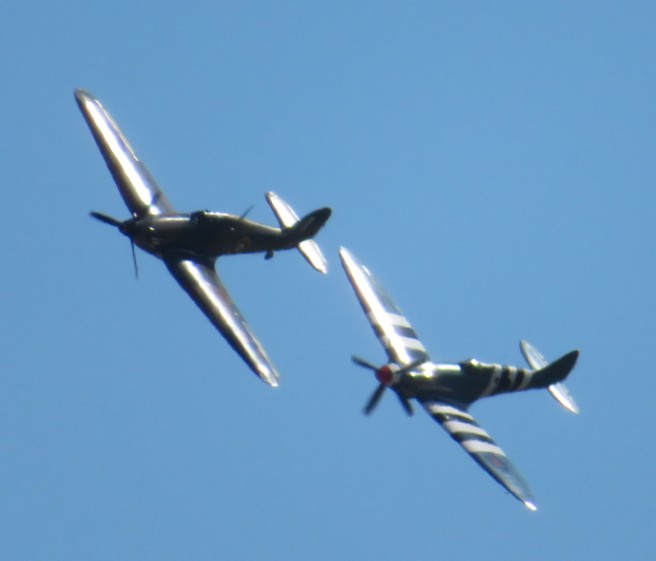 Editor's NOTE: Kevin Charles, Senior Editor for allspitfirepilots.org, was on hand to re-live some of his boyhood memories and re-connect with the Spitfire, the aircraft his father flew in WWII. He provided this summary of the IWM Duxford Battle of Britain Airshow, one of the premiere aviation events of the year.

"As a boy of 10 I vividly remember an armada of planes, Spitfires, Hurricanes, Heinkels and Messerschmidts flying low over the school.

The sound was awesome.

No this wasn't the war (I'm not that old!), it was 1968 and the aircraft were on their way to film aerial sequences for the film The Battle of Britain.

Fast forward to the present day and your newly promoted Senior Editor for the allspitfirepilots.org website is at The Imperial War Museum at Duxford for the annual Battle of Britain airshow which was also commemorating the 50th anniversary of the the making of the film of the same name.

Duxford is a fantastic museum and working airfield, with a huge collection of airplanes and military vehicles and more than enough exhibitions to keep you occupied for at least a day. If you are in the area it is well worth a visit. IWM DUXFORD.

Saturday dawned on a beautiful late September day, warm and sunny with not a cloud in the sky, a perfect day for an air display.

The day started with a walk along the flight line with the sun just rising - a perfect photo opportunity. Lines of Spitfires, Hurricanes and Buchóns (the Spanish built Rolls Royce Merlin powered version of the Bf 109 that was used in the film) all ready to take to the air.

It's on the flying days that Duxford really comes alive. On the Saturday there were huge crowds, people dressed up in 1940's uniforms to give a flavour of what the airfield may have looked like so many years ago, and a palpable buzz of excitement. Music was supplied by Bader's big band (comprised of musicians with disabilities), and dancers performed their moves to 1940's tunes..

But the real stars of the day are the aircraft, and for your writer the greatest interest being the Spitfire's, with Marks I, V, VIII, IX, XIV, XVI, XVIII all being represented.

It is unfortunate these days where Health and Safety is so predominant the displays are not as close to the audience as they used to be. The solution? Fill the sky with aircraft performing superbly choreographed mock dog fights and add a few pyrotechnics and smoke trails for colour and in among many superb displays, these two shone out.

The Bremont Great War Display Team with replica aircraft from World War I, and to start the show a collection of 4 Buchóns, 4 Hurricanes and 3 Spitfires weaved intricate patterns in the sky above Duxford.

A flypast of 15 Spitfires and a display from a single Spitfire IX MH434 completed an unforgettable day and it brought back memories from 1968 and the last time I heard so many Merlins in the air at the same time.

The sound still has the power to make the hair on the back of neck stand up.

Many thanks to Rachel Powell from the IWM for providing us with media access.
The IWM volunteers who escorted me and kept me under control.
The Spitfire Society for distributing a number of T-Shirts. Let us know if you got one.
post comment