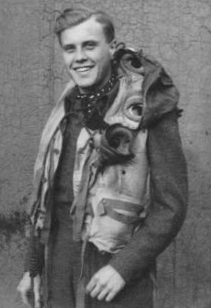 On our home page, we have a "FEATURED" link which currently features the pilot Laurie Whitbread added to this site by author and RAF veteran Ron Powell (and the book review is coming soon - it's begun). Wings Over Summer contrasts the recent book we reviewed ("Spitfire vs 109 : Decisive Duel") in that it's a more personal story following a pair of Spitfire RAF pilots in the Battle of Britain. I've only just started, but I am very much enjoying it. Wings Over Summer is a novel focusing on two characters, inspired by an RAF pilot whose grave Ron passed all the time as a child. Pilot Laurie Whitbread was graciously added to this site by Ron.

Our next featured pilot (image top left - will be featured on the home page in December) is reconnaissance pilot John Bendixson. John's son added his father's listing to this site, with images, links, squadron information, and, even Spitfire serial numbers flown. John's father was a photo reconnaissance pilot, and, his son just added an article / documentary based on ops records of a low level flight over Brest France. Eventually, we'll do a feature article on recon pilots, so that a sense of what they faced comes to life. John's recently added documentary reads very well, and, gives flavour to low level recon. The speed, the thought process e.g. "will I miss the target", memorizing and then recognizing job locations (target), flying on the deck in bad weather, seeing the machine gunner's face below you giving it all they've got (to shoot you down). It's crazy -- the recon pilots built their own survival techniques. At low level, flak or machine gun hits make bailing out a non-option, no wonder they finished their missing covered in cold sweat. Getting it right on first pass when only 50-75% of the machine gun nests were on you versus a second pass could mean life and death. They did their jobs with professionalism. They were heroes.

Every month or two, we'll feature a new pilot, and, write a small blog entry on the outgoing featured pilot, the new one, and, some other candidates. Some pilots may be featured because there are some gaps in historical information we'd like filled in, other pilots may be featured because of some fantastical story, such as Tony Snell's multiple escapes from the enemy after being shot down, and, his very entertaining post-war career in the Caribbean.

Hello, I found your site whilst researching all the Spitfires my Father had flown in WW2 using his log books, and found that my Father is listed together with aircraft he had flown and John Bendixsen and his Son mentioned. Please, how can I contact his Son? I assume like my Father Donald Hill he is long passed. I have a superb photo album full of crew photos etc I would like to contact as many family members as possible to see if we can swop photos?
reply