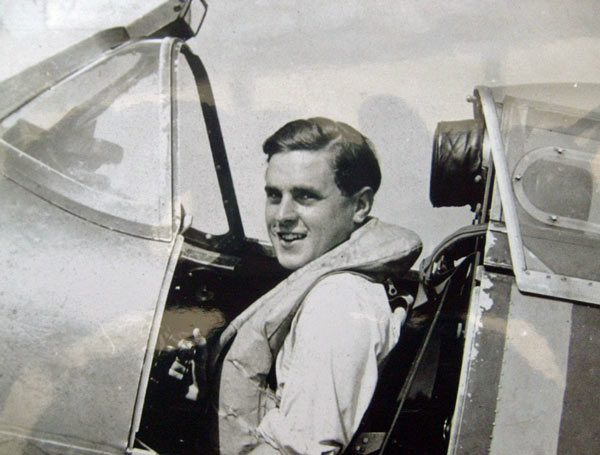 < = expand >
Alexander Nelson Robin Langley Appleford was born on 16th September 1921 in India, making him one of the youngest pilots to take part in the Battle of Britain. He was educated at Kings College, Taunton.

He began his initial training at 12 E&RFTS Prestwick on 8th August 1939. He was next posted to 11 FTS Shawbury on 26th September and on completion of his training joined 66 Squadron at Duxford on 13th May 1940.

He was shot down in combat over the Thames Estuary on 4th September and baled out, slightly wounded. His Spitfire, P9316, crashed near Howe Green Farm, Purleigh, Essex.

Posted away from 66 Squadron on 18th December 1940, Appleford went to 8 FTS Montrose for an instructors course, after which he went to Southern Rhodesia to instruct at 22 SFTS Gwelo. He was hospitalised, cause unknown, on 3rd November 1941 firstly in Nairobi and then Durban until mid-April 1942.

Appleford was posted to Egypt and joined the Aircraft Delivery Unit, Cairo on 2nd June, staying with it until 10th January 1943 when he went to 274 Squadron at Benghazi to fly Hurricanes on coastal defence.

His tour completed, Appleford was posted to 71 OTU Ismailia as an instructor. After six weeks he returned to the Aircraft Delivery Unit and on 15th November 1943 went south to the Central Flying School Bloemfontein.

From early February 1944 until May 1945 Appleford instructed at various Air Schools in South Africa.

He returned to Britain on 1st July 1945 and joined 587 Squadron at Weston Zoyland on 24th August.

He was released from the RAF in August 1946 as a Flight Lieutenant.