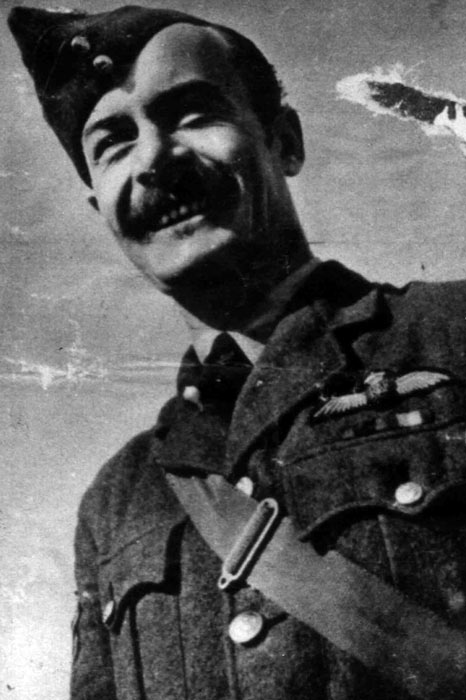 < = expand >
Stanley John Arnfield was born on 3rd October 1913 and was initially educated in India before going to the Royal Masonic School at Bushey, Hertfordshire. He joined the RAF as an aircraft apprentice in January 1930, passing out as a Fitter of Aero Engines in December 1932. By 1933 he was based at Abingdon with the rank of Leading Aircraftman, he was then posted to Quetta in India in 1935 where he helped with the earthquake tragedy that struck Baluchistan at that time. (It is estimated that between 30-60,000 people died when a force of 7.7 Mw was recorded). During 1936-37 he was involved in assorted supply drops and minor bombing.

LAC Arnfield returned to the UK in the summer of 1937 and applied for pilot training. He was accepted and commenced flight training at the Perth Flying Club, flying in Tiger Moths. By November 1937 Sgt. Arnfield had transferred to 7 FTS at Peterborough.

In June 1938 he began flying Westland Wallace aircraft and carried out a variety of bombing exercises. He had his first flight in a Hurricane on 30th September 1938 and then transferred to 610 Squadron shortly afterwards, flying Spitfires. During 1939 he trained intensively on this aircraft. On the 26th January 1940 he made a forced landing after a routine patrol. On 31st May, patrolling over Dunkirk, he claimed a Me109 destroyed. This was followed by a shared (with Flt Lt. J Ellis of 610) He111 destroyed when an aircraft of Weather Reconnaissance Staffel 51 was brought down in the sea off Margate. Arnfield flew continuously through June and July and was shot up by Me109’s in Spitfire R6621 over Dover on 12th August. The aircraft was written off after he brought it back. In another aircraft he claimed Me109’s destroyed on 15th and 16th August followed by a further two on the 18th.
Sgt. Arnfield’s luck ran out six days later on the 24th when in combat over Hawkinge in Spitfire R6686. He was shot down by Hptm. Foezoe of 4/JG51 but managed to bale out, his aircraft crashing in flames at Hammil, near Eastry. He broke his ankle on landing and was admitted to Victoria Hospital at Deal.

He was recovering for some time and this may explain the failure to award him a DFM, which normally would have been the due of someone with six confirmed victories. By December 1940 Arnfield had returned to flying duties, serving as an instructor with the Commonwealth Flying Training Scheme in Canada. He had been commissioned as a Pilot Officer on 26th July 1941 and promoted to Flying Officer exactly a year later.

In September 1943 Arnfield, now a Flight Lieutenant, made the transition to bombers, training on Wellingtons and progressing to operations on Lancasters with 166 Squadron.

His first sortie was Berlin on 16th December 1943, followed by many others including Stettin, Brunswick, Leipzig and Stuttgart. His last sortie was on 22nd April 1944 to Dusseldorf. He was awarded the DFC (gazetted 30th June 1944), the citation stating:

Flight Lieutenant Arnfield, now on his second tour of operational duty, has taken part in a large number of fighting and bombing sorties. His targets include some of the enemy’s most heavily defended objectives. In January 1944 he was detailed to attack Berlin, and although one engine of his aircraft failed while on the outward flight, he pressed on and completed the mission. On another occasion and while en route to Stuttgart, F/Lt. Arnfield encountered severe icing and one engine failed; nevertheless he flew on and attacked the target successfully. An excellent Captain of aircraft, this officer has set a high standard of operational efficiency and consistently displayed courage and devotion to duty.

Arnfield returned to training duties and continued in this role until the end of the war. He retired from the RAF on 12th February 1951 as a Flight Lieutenant in the Secretarial Branch, retaining the rank of Squadron Leader. He died of a heart attack on 24th September 1954.