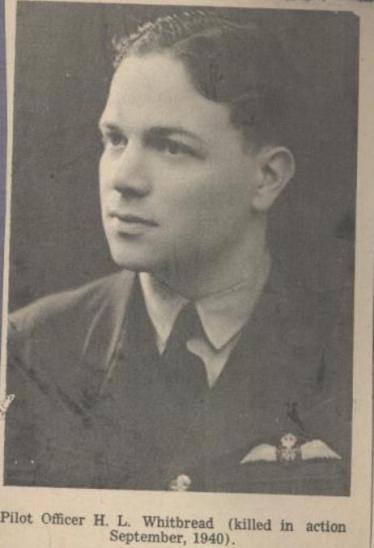 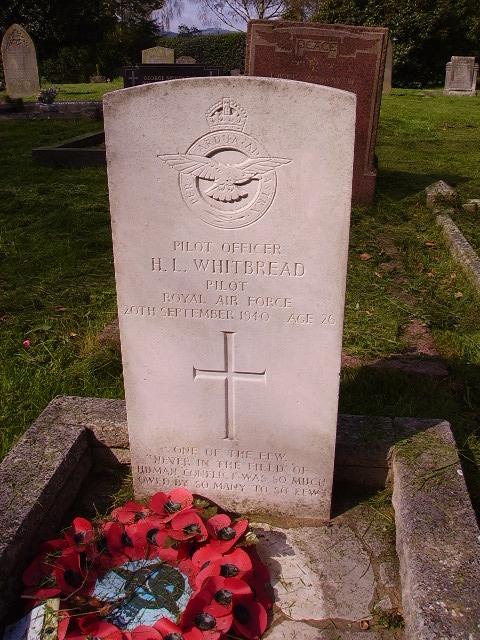 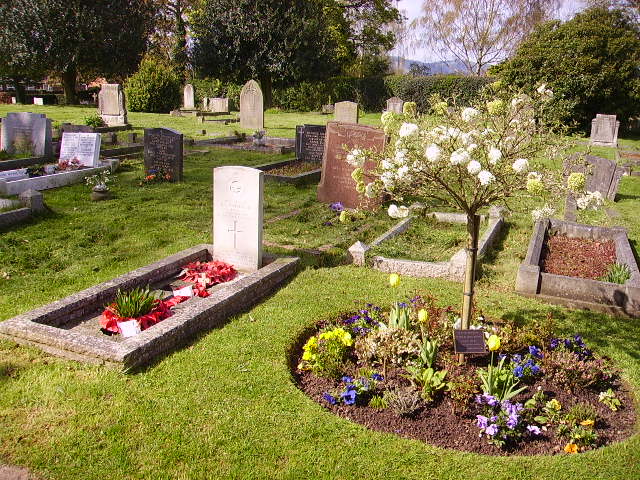 < = expand >
Herbert Laurence (Laurie) Whitbread was born in Ludlow on August 21, 1914. He attended Ludlow Grammar School, where he was a popular pupil who excelled at sport, notably boxing, rugby and hockey, at which he represented Shropshire. He left to become an apprentice with Fisher and Ludlow of Birmingham, a company that manufactured sheet metal for the car industry. In January 1939, with war seemingly imminent, he applied to the Air Ministry and left the firm to take up a short service commission in the RAF.

In November 1939, after flying training on Tiger Moths at RAF Desford in Leicestershire, and Airspeed Oxfords at RAF Kinloss on the Moray Firth, Laurie joined 222 Squadron, a night fighter unit, flying Bristol Blenheims out of RAF Duxford in Cambridgeshire. His squadron commander described him as a short, stocky, cheerful, character, pleasant, well-mannered and quiet. And, at a time when relations between commissioned and non-commissioned ranks could be formal and frosty, NCO pilots described him as pleasant and friendly with no affectation, at ease with all ranks.

When the winter weather permitted, the squadron flew convoy patrols over the North Sea. Such missions could be monotonous affairs, but not always. On December 14, Laurie’s diary states: “Narrowest escape to date, nearly spun in while night flying”.

In March 1940, much to their delight, the squadron was chosen to convert to Spitfires. Laurie received just two short training flights in a Miles Master before being sent off in the most advanced fighter of its day. He received no further instruction, and the squadron began practising tight formation flying and fighter attack profiles, the tactics they expected to employ against massed ranks of unescorted enemy bombers.

On April 15, Laurie had his first accident, nosing in his Spitfire. There must have been extenuating circumstances, because the squadron commander cleared him of blame.

The Phoney War came to an end on May 10 when Hitler’s forces began their sweep through Holland, Belgium and northern France. At the end of the month, 222 Squadron, which now included Flight Lieutenant Douglas Bader, flew over the Dunkirk beaches and the evacuation fleet. By June 4, when 338,000 troops had been evacuated, the squadron had lost four pilots killed and one missing. They’d also realised their fighter attack profiles were obsolete, although they continued to fly in tight formation.

After a few quieter months moving between several airfields in the north of England, on August 29, 1940 222 Squadron moved to RAF Hornchurch in Essex, the front line of the Battle of Britain. In their first 48 hours at the airfield, they lost several aircraft and pilots, partly because their tight formations restricted the ability to spot the enemy, and to manoeuvre if they did. In an effort to reduce the losses, Laurie was one of three pilots chosen to fly Tail End Charlie, becoming the eyes of his squadron. It was a position of great responsibility, and danger; Tail End Charlies were often the first to be hit.

On August 31, Laurie was involved in an attack on 24 Messerschmitt Bf 109s protecting a force of Heinkel bombers. He closed to within 50 yards of a Bf 109, firing into its fuselage ‘from tail to cockpit’. The German fighter rolled onto its back, issuing white smoke. It started to nose down, but Laurie had to disengage. No-one saw the Messerschmitt crash, so the kill could not be confirmed.

September opened with a pattern of numerous scrambles and interceptions. On September 7, the Luftwaffe shifted its attacks from RAF airfields to London. Fighter Command was caught by surprise and 222 Squadron was one of the few units to find and intercept the bombers that day.

Laurie engaged a force of Bf 109s at 27,000ft over the capital, but became separated from the rest of the squadron. Nevertheless, he continued to look for a target and found a force of 25 to 30 Dorniers. He dived down on a straggler at 20,000ft and set its right engine on fire, but was forced to pull away by machine gun fire from the rest of the formation. Once again, the fate of his target could not be confirmed.

On September 9, he had better luck. The squadron attacked a force of Bf 109s escorting a formation of bombers flying west at 20,000ft. Laurie fired a four second burst at a Messerschmitt, shooting off its right aileron and sending it into a spiralling descent. This time, his formation leader saw the German pilot bale out and Laurie was credited with a kill.

On September 14, he wrote to his mother in Ludlow. He said everything was fine, although he was getting over a touch of frostbite in his left hand, the result of flying in the intense cold at high altitude. On September 18, he was meant to start a week’s leave, but was called on to fly a patrol over Canterbury. His leave obviously fell by the wayside, because he stayed on at Hornchurch.

At 1055 on the morning of September 20, the squadron was scrambled to meet an incoming raid. As they clambered for height above the Thames Estuary, a formation of Bf 109s fell on them. Laurie’s Spitfire was hit. It seems that he unstrapped and attempted to bale out, but was shot in the left side and fell back into the cockpit. The aircraft crashed in the garden of Pond Cottage, Higham, near Rochester in Kent at 1115. Laurie was thrown clear of the wreckage but died instantly. It is unlikely that he saw his nemesis, probably an Oberleutnant Hans ‘Assi’ Hahn, although it may even have been Major Adolf Galland, whose formation was in the area.

Every inch a local hero, Laurie was buried in Ludlow Cemetery with full military honours. Additionally, a road was named in his honour, and the tower of the parish church is illuminated on the anniversary of his death every year.

Some 68 years later, a local lad myself, I dedicated my Battle of Britain novel, Wings Over Summer, to his memory. His family were delighted.

Shropshire Blue Vol 2, On The Buffet

Shropshire Blue, A Shropshire Lad in the RAF Vol 1, Preparation For Flight

I used to pass and pay homage to Laurie's grave as a lad growing up in Ludlow. He was one of the inspirations for my 32-year career in the RAF, and for my Battle of Britain novel, Wings Over Summer, which is dedicated to him.