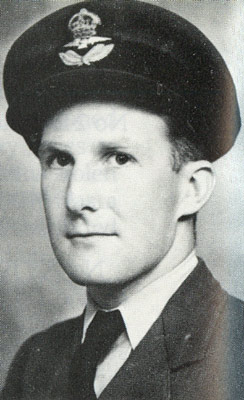 < = expand >
David George Samuel Cox, from Cambridge, was born on 18th April 1920 at Southsea, Hampshire and educated at Bournemouth Collegiate School. After leaving he worked as a clerk in a solicitors office.

After failing an RAF medical he worked for some months at Billingsgate Fish Market to build himself up.

Cox was himself shot down on the 27th in an engagement over the Canterbury area in Spitfire X4237. The aircraft was written off after crashing at Wye Court Farm at Wye and Cox was wounded. He was admitted to hospital and was there for three months.

He claimed a Me109 destroyed on 27th June 1941 but in the engagement his Spitfire was badly damaged and he made a crash-landing at Dungeness.

Cox probably got another Me109 on 12th August. He was commissioned in July 1941 and posted away from 19 Squadron on 12th September to instruct at 57 OTU Hawarden. He went to CFS Upavon for two weeks in October on an instructors course.

The squadron was posted to North Africa in November 1942. On the 8th it was in Gibraltar and on the 16th it flew in to Maison Blanche airfield, Algeria.

He was made a Flight Commander and awarded the DFC (gazetted 16th February 1943).

Cox's tour expired on 26th April 1943 and he was posted back to the UK on 15th May. From 21st June to 3rd August 1943 he gave talks at factories, after which he became a Tactics Liaison Officer, instructing American pilots.

In early January 1944 Cox was briefly with 130 Squadron at Scorton but moved to 504 Squadron at Hornchurch on the 20th as a Flight Commander. On 12th March 1944 he went to 84 Group Support Unit, Aston Down, remaining there until 5th June when he was posted to command 222 Squadron at Selsey.

Cox rejoined 84 GSU, then at Thruxton, on 17th July and stayed until 2nd October 1944 when he was posted to No. 1 Squadron at Detling.

He received the Croix de Guerre (Fr) in September.

He was released from the RAF on 11th March 1946, when he resigned his permanent commission.

Cox became a manager with Macfisheries at Fleetwood, going on to Grimsby in 1950 as depot manager. In 1961 he became controller of eight depots around the country and in 1967 was appointed chief buyer of fresh and frozen fish to 350 retail units. He retired in 1980.

Cox was an honorary member of the Officers Mess at RAF Binbrook and in 1980 he was taken up in a Lightning trainer to mark the 40th anniversary of the Battle of Britain.