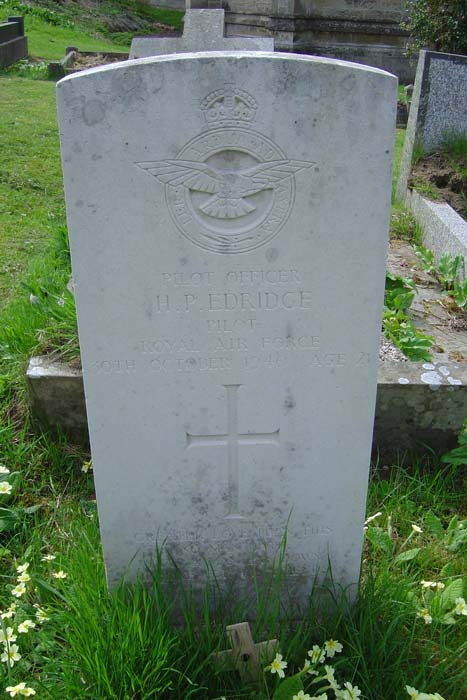 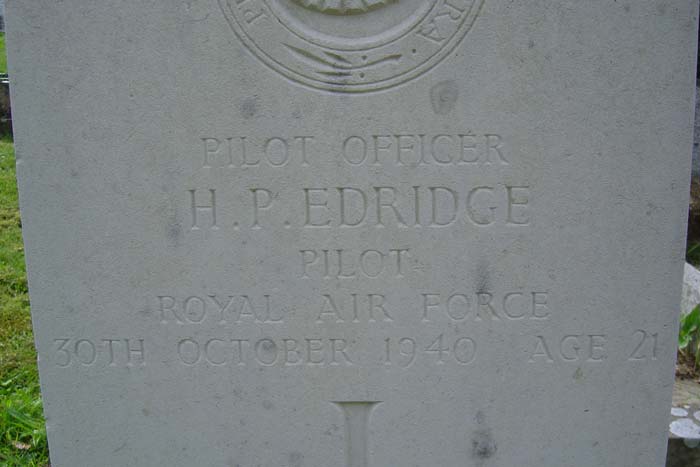 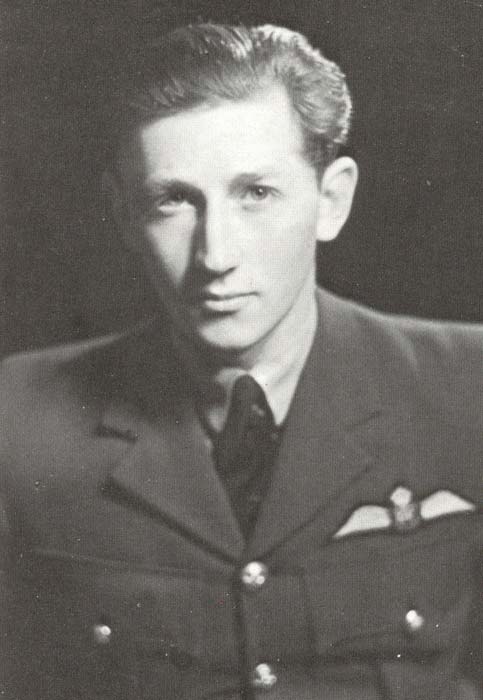 < = expand >
Hilary Patrick Michael Edridge joined the RAF on a short service commission in January 1939. He was with 222 Squadron at Duxford in 1940 and then moved with the squadron to Kirton-in-Lindsey to convert to the Spitfire. At the end of May they moved again to Hornchurch to cover the Dunkirk evacuation. Over Dunkirk on 1st June he probably destroyed a Me109.

On 30th August Edridge was shot down by Me109’s. He baled out, with burns to the face, landing at Broome Park. His Spitfire, K9826, crashed and burned out at Marley, near Barha.

Edridge made a forced-landing at Tillingham Hall, near Horndon in Essex on 15th October due to engine failure. (Serial number not known).

After being severely damaged in combat with Me109’s on 30th October 1940 in Spitfire K9939. Edridge, suffering from a head wound, attempted to land at Longwood Farm, Ewhurst. The aircraft caught fire and overturned. Edridge was cut free and rushed to an emergency hospital at Brickwall House, Northiam but died that day of his injuries.

Son of Ray and Georgina Mary Edridge, of Bath.

Data matches on 3 of 4 points (cause, surname, date). Seems likely to be the forced landing at Tillingham Hall.
reply

222 Squadron's ORB says K9795 piloted by P/O Edridge forced landed 1940-10-15 at Terling which matches the Spitfire production notes (they have probably the same source). However Tillingham Hall in Essex is just south of West Horndon railway station and south of Brentwood and is about 25 miles from Terling which is North East of Chelmsford. I've added a link to the BBM website which mentions K9795 and Tillingham Hall, but doesn't say where this pairing came from. The Aviation Safety Network website also links K9795with Tillingham Hall and I'll add the link as well.