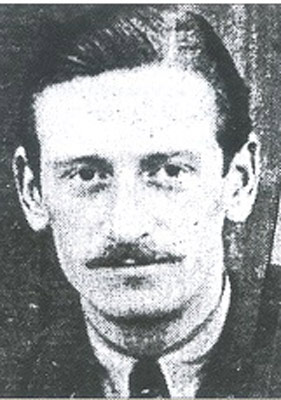 < = expand >
Peter Else was born on 28th February 1917. He joined the RAFVR on 23rd February 1938 as an Airman u/t Pilot. He began his flying training at 22 E&RFTS Cambridge. At that time Else was working as an engineer at Marshalls Flying School, who were running the course.

Called up at the outbreak of war, Else went to 6 FTS Little Rissington on 7th October 1939 for advanced training. At the end of the course he was posted direct to 72 Squadron at Church Fenton.

On 6th June 1940 Else was attached to 610 Squadron at Gravesend because of a shortage of pilots on the squadron. On 25th July he destroyed a Me109 off Folkestone.

On 26th August, whilst attacking a Me109 over the Dover/ Folkestone area, his Spitfire P9496 was hit from behind and set on fire. As he tried to bale out he was hit by another burst, which shattered his left forearm. Else left the burning aircraft at 20,000 feet and landed on Hawkinge aerodrome, about 200 yards from the dispersal point he had taken off from. His aircraft crashed at Cole Farm, Paddlesworth.

He was taken to the Kent and County Hospital at Canterbury, where his left arm was amputated just above the elbow and he was treated for burns to his face and right hand. He was discharged on medical grounds on 2nd April 1941 and returned to Marshalls as an aircraft inspector at 22 EFTS.

On 24th May 1944 Else began test flying of Tiger Moths and Auster DTs after repairs or overhauls, using a special attachment in place of the hand on his artificial left arm.

He made his last flight as pilot-in-command on 1st October 1946 and let his A' Licence lapse in order to concentrate on the engineering side.