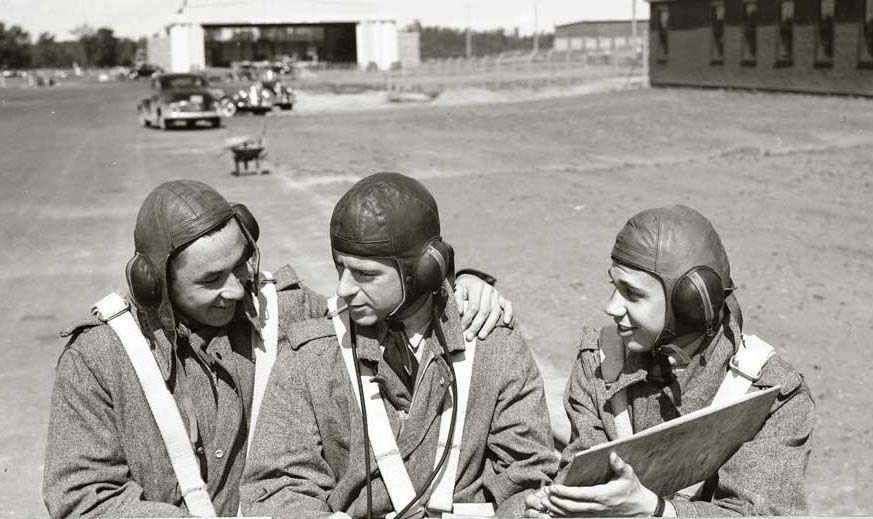 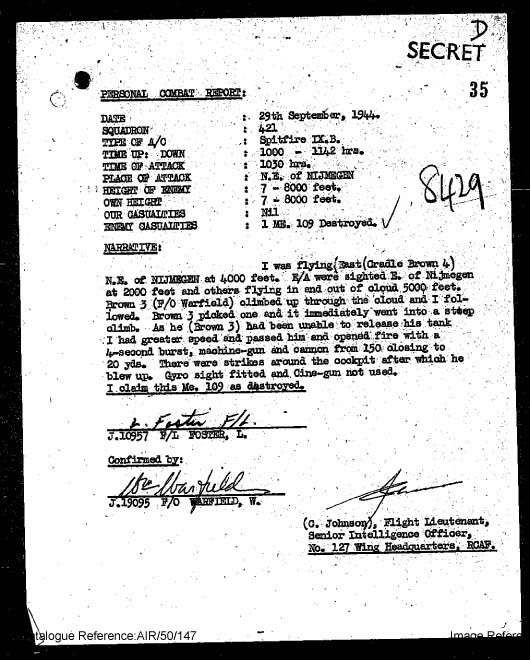 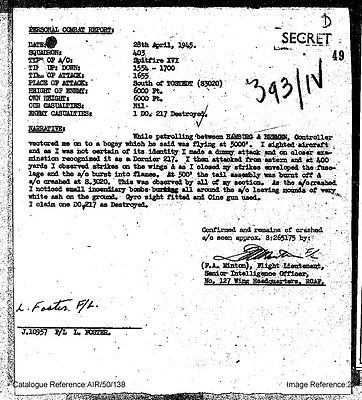 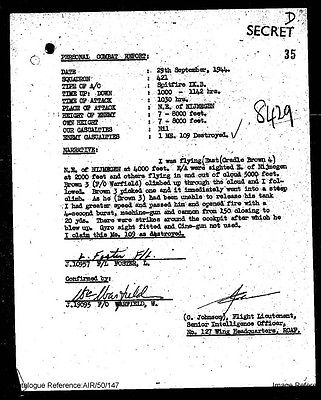 < = expand >
What is amazing is when you see medals (and a lot of accompanying historical information) on a decorated pilot for sale on ebay. Foster Livingstone's dress uniform and miniature medal set are one such collection that caused me to add this pilot to the site. He served with RCAF 403 and 416 squadrons, with a long service career in combat, in training other pilots, and, in special assignments (e.g. rolls royce attache) surviving the war. Originally from Grimsby Ontario, Canada, he passed away in Smiths Falls Ontario in 2003 (not far from Ottawa, Canada). There are many links to the right which provide an excellent history on F/L Livingstone's operational career, including being shot down (and being wounded on landing), baling out, destroying enemy aircraft, destroying ground targets, and, training duties at various OTU squadrons.

Interestingly, I pulled some of the scans from ebay that show some actual logbook reports (will they be on ebay forever?), and otherwise linked to some of the existing online records. If family have additional details or photos, they'd be welcome to post directly to this listing.

From his obituary in the Ottawa Citizen - 2003 (he was an exceptional athlete);

FOSTER, Squadron Leader Livingston 'Cap' DFC RCAF 1940-1967 Flew spitfires with 403, 416, and 421 Squadrons during WWII. Property Manager with the Ontario Housing Corporation and Smiths Falls Housing Authority. During public school Cap skipped 4 grades and entered high school at age 10 he also held an Ontario drivers license at the age of 11. At age 12 Cap contracted rheumatoid arthritis in his legs. He was bedridden for 10 months after which his physician told him that he should take up swimming to strengthen his legs. Cap became a competitive long distance swimmer and at age 16 competed and completed the Cherry beach marathon a swim of 13 miles. Cap went on to excel in track and field, setting numerous high school records in the high jump, pole vault, and the decathlon. After the Second World War, Cap held the CIAU high jump record which he set while attending Guelph University. He was also a member of the Burlington Tigers boxing club and boxed in Maple Leaf Gardens during the 1930's Cap also represented the RCAF in both track and boxing at military events during the war. A scratch handicap golfer for many years Cap competed in the German Open as an amateur. He was club champion at Richmond Centennial and at Cedarhill golf course, where he still holds the course record with a round of 62 from the gold tees. During the early 1970's Cap raced powerboats and participated in numbers CBF and APBA sanctioned regattas. He was also an avid bowler winning the Ontario provincial bowling championship for pins over average in 1977. Cap is survived by his loving wife Lillian, his daughter Judy (John) Raymond of Canton, Connecticut, and his sons Michael (Diana Cieslik) of Osgoode, and Patrick (Heather) of Smiths Falls. Cherished grandfather of James Raymond, Daniel Raymond LLB, Dr. Mathew Raymond of Connecticut, Alexander Watson and Victoria Foster of Ottawa, and Megan and Christie Foster of Smiths Falls. Cap is also survived by 9 great-grandchildren. Friends may pay their respects at the Blair & Son Funeral Home, Smiths Falls, Wednesday, March 12, 2003 from 11:00 a.m. followed by Service in the Chapel at 1:00 p.m. Interment, St. Paul's United Cemetery, Richmond, in the Spring. In remembrance, donations to the Canadian Diabetes Association would be appreciated.