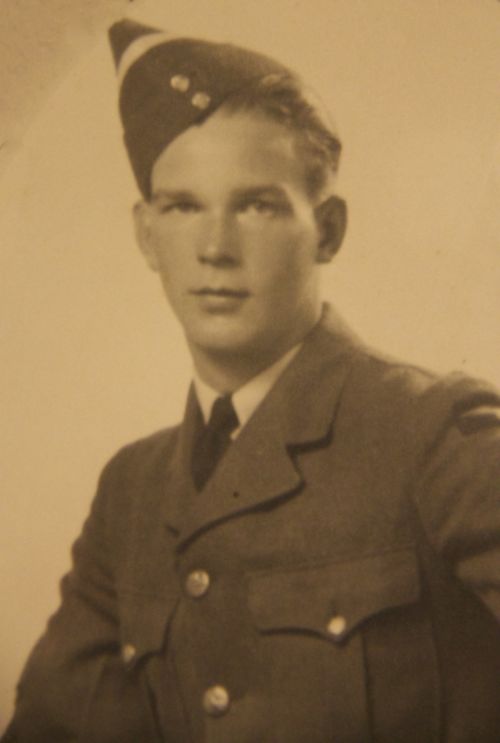 < = expand >
Stan gained his matriculation and joined the RCAF in November, 1941.

Stan commenced his flight training in April, 1942, in Ontario and New Brunswick flying Harvard II. By February, 1943, he was in Worcester, England and by August 1, 1943, he was with 412 Squadron, at Biggin Hill, Britain and while there, was involved in a flying accident. The tire of his aircraft blew on landing, sending him across the runway, facing the direction he had landed. Another plane crashed into his wing. The investigation states: "The pilot of his aircraft is in no way to blame, as the accident was the fault of the pilot who rammed him".

He was awarded Pilots Flying Badge April 25, 1942. During D-Day and Operation Overlord he participated patrols, escorts, fighter sweeps, dive bombings and intercepts over Normandy. He flew 80 sorties (165 operational hours) before he was shot down June 27, 1944, on his 22nd birthday (June 28), during a scramble. He was wounded by Flack, but was able to land his aircraft, wheels up and get his Spit returned safely.

Short Account of Service, Training and Duties: Enlisted in Service as Std. aircrew. Graduated as a Pilot and proceeded Overseas to an Operational Training Unit. Tour with 412 Squadron, shot down by flack but landed across the lines. Was in hospital from June/44 until April/45. Flew with 186 Squadron at Dartmouth until discharge. G.S. wound in left leg. Promoted to rank of Flying Officer. Entitled to wear CV5M and Clasp. RCAF Operational Wings, 1939-45 Star. Transferred to the RCAF (Reserve) General Section Class E. He was deemed Fit--referred to D.V.A. for assessment of disability of left leg.

His debriefing states: This man is considered to have outstanding ability to learn, high mechanical knowledge. His records show that he was a keen efficient pilot. He is well matured but very restless....His Air Force record is a very good one.

Stan was very proud of his RCAF experience and was proud to have known Buzz Beurling, whom he considered one of Canada's greatest pilots. Beurling signed off on Stan's flight log on numerous occasions. Stan also flew with and was friends with Charley Fox, who injured Field Marshal Erwin Rommel during a strafing run.