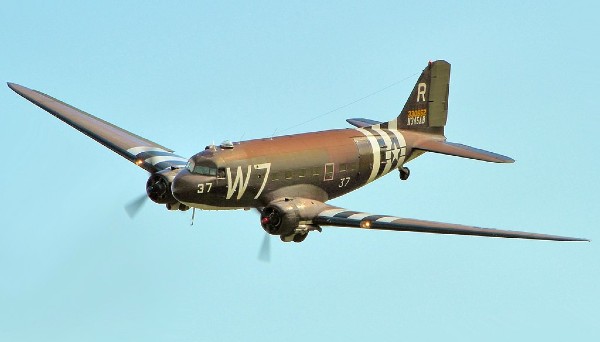 Aviation fans who are lucky enough to be along the route flown by 34 Dakotas on June 5, 2019 (Duxford-Maidstone-Portsmouth-Caen France) will hear the sounds and get the feel of what 800 Dakota C-47 transports that carried over 24,000 paratroopers over to France was like in June 1944. The mission laid the groundwork for the June 6 invasion that changed the course of the war.

Comments welcome (below) from anyone who attended related events or who viewed the fly-overs. About 250 parachutists, in full Allied uniforms, will be dropped into Sannerville, near Caen, on June 5th 2019, where thousands of British paratroopers landed under cover of darkness in June 6, 1944.

More information on the Dakota and the 'Daks Over Normandy' event are available at daksovernormandy.com, along with another excellent article by the sun on the D-Day D-Day Dakotas and the airborne troops that touched down.

The June 5 (Daks Over Normandy) celebrations were attended by dignitaries, veterans, and the public in Portsmouth as well as in France where the following video shows a re-enactment with hundreds of paratroopers which can be seen on youtube here.