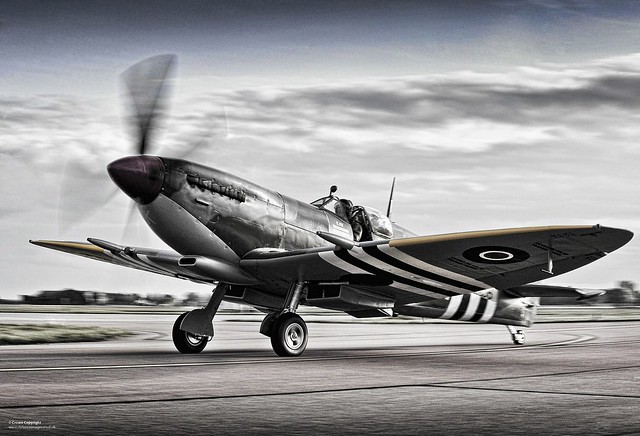 Along with the C-47 Dakotas, the Spitfire played a key role in the D-Day invasions on June 5 and 6th 1944, where according to www.thesun.co.uk article ...

"A total of 55 Spitfire squadrons strafed and bombed Nazi defences on the Normandy coast during Operation Overlord — the largest seaborne invasion in history. The planes' mission began the day before the troops arrived in their landing craft on the morning of June 6."

The enemy airforce in the skies was largely depleted, so apart from ground attack, a watch still had to be kept for enemy fighters. An eyewitness account as provided by RCAF online news and "The Memory Project" gives a bird's (Spitfire's) eye view of the action closer to D-Day landings ..

Ivor Williams, a Spitfire pilot with 443 Squadron, assisted in patrolling Juno Beach on D-Day, warding off enemy fighters and providing cover for ships. “I flew the last patrol at night on June the 5th [1944], and we were, in the south of England, and in five minutes we were over the [English] Channel,” he told The Memory Project in an interview that is available on their website. “It was the most fantastic sight that I will ever see, all these boats coming out of little harbours and around the south coast of England and they were in formation.

“And we saw this, all these little arrow heads coming over the Channel, we knew that the beach invasion was on, and so we were not allowed to go over the German lines, because for obvious reasons, but we had the aircraft were painted with black and white stripes at that point, so that there were no mistaking the Allied aircraft. And we did a recce and returned late at night, and then had a few hours’ sleep and took off the next morning, that was, and then we knew the invasion was on.

“And the sky was full of airplanes of course. We were circling back and forth over the beachhead, we didn’t go back, we were making sure that the German aircraft didn’t get to strafe our own troops, so it was a recce to make sure the sky was kept clear of enemy aircraft. We were back and forth, we could see there was fighting on the ground, we could see tanks blazing and trucks, we really knew the invasion was on at that time.”

Stocky Edwards, another RCAF WWII Spitfire pilot recently gave this interview to Global Television (in 2019, well into his nineties), giving an account of his D-Day flight operations as well as previous action in Malta.