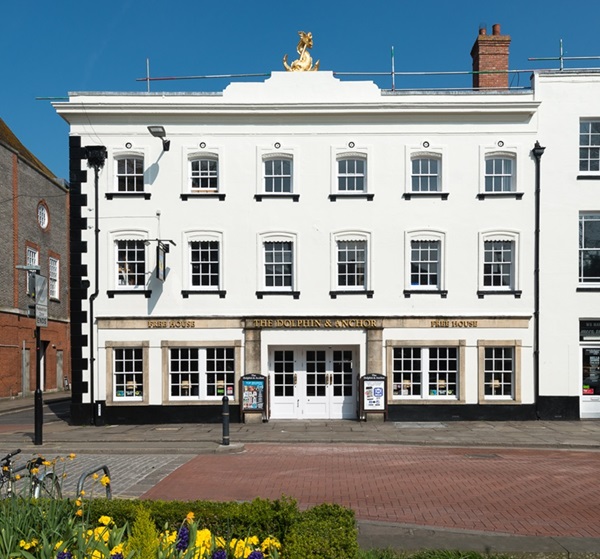 Come visit and socialize with other Spitfire enthusiasts, bring a pilot story or a photo -- or just have a pint. Founder of this site, Kurt Turchan will be visiting the area (from Canada) and will be joined by Ron Powell (author of Wings Over Summer) who will give a talk on Battle of Britain Pilots. Ron is a retired RAF pilot officer who added one of the first pilots to the site P/O Laurie Whitbread.

Wetherspoons pub (The Dolphin and Anchor, now 9 West Street, Chichester, was frequented by pilots and aircrew at the time ) is in the vicinity of the Tangmere airfield, which today, also has the Tangmere Military Aviation Museum nearby.

Drop by any of these events to say hello.

Kindly RSVP (use contact us below) if you think you might drop by any one of these. There is a 4th event where you can meet one of our editors at this year's IWM Duxford Battle of Britain Air Show, featuring a flypast with 16 Spitfires, on Sept 21/22. Kevin Charles will be on hand to meet up, and, he'll have a few T-shirts also, so bring your pilot story or photo. Kevin's father flew with 601 squadron.

Ron will have some Spitfire ale glasses to give away on the 11th, provided by Shepherd Neame, and Kurt will have a few allspitfirepilots.org T-shirts to give-away, these are hot off the press -- brand new designs provided by Aerographics of Ottawa, Canada (you can see the design on any pilot page, lower section).

The goal of this trip is to let more people know about the site so that more pilot bios and aircraft linkages can be added while the imagery and first hand stories passed down still exist. The site has so far collected thousands of pilot stories, regardless of service record, from the Battle of Britain to the far reaches of Asia and North Africa. Italy and the DAF (Desert Airforce) seems to be a popular focus lately. There are new finds each week, most recently some imagery from the Wasp of Spitfires being readied for take-off on their desperate mission to save Malta during the siege.

Check the Spitfires section for updates on specific serials, check the Pilots section for the latest pilot additions. The full media release for this tour is included below (bottom).

Kurt Turchan, the founder of allspitfirepilots.org a website dedicated to the Spitfire and the pilots that flew it, will be touring England this fall to expand his online history of the renowned British fighter aircraft that includes photos, memories and a database of Spitfire pilots from around the world.

“Thousands of Spitfires and pilots have been submitted to allspitfirepilots.org by users from all over the world including the UK, Australia, Canada, the US, France, Poland, Norway, New Zealand and South Africa,” said Turchan. “While pilots from many nations flew the Spitfire, it was designed and built in the UK so it is my hope that this trip will raise awareness of the site and encourage history buffs and Spitfire enthusiasts to visit the site and contribute their own stories, photos and pilot information.”

Turchan’s 100-mile bicycle tour kicks off on 11 September at 7 p.m. at the Dolphin and Anchor pub (Wetherspoon) in Chichester, where he will be joined by author and former RAF pilot Ron Powell. Powell will give a talk on selected Battle of Britain pilots. All are welcome, and Turchan hopes to meet with those who may be able to contribute to the site. After attending the Battle of Britain Day ceremony in Capel-le-Ferne on 15 September Turchan will visit the Old Jail pub on the 16th after visiting Biggin Hill, and again welcomes anyone to join him.

“The site captures technical details and operational records, but it is the human stories that are the most compelling,” added Turchan. One of his favourite stories was told by the son of photo reconnaissance pilot, John Bendixsen who detailed his father’s crash landing during which he ploughed through a hedge and onto a road stopping just short of a stone wall, only to be told off by a girl on her bicycle for interrupting her ride. The air war was vicious and fiercely fought, but there were some lighter moments. “These were heroes, each and every one of them, whether they survived or were killed in training, an accident, or battle.”

Turchan’s plan is to continue to update the custom software he developed for the site, then transfer the stewardship of it to an organization in the UK. “The goal of the site is to capture not just the aces, but each and every pilot and their pre and post-war activities,” added Turchan.

Anyone can register and contribute a pilot or a Spitfire photo, add to existing entries, leave a comment or ask a question. Visitors can also “follow” a pilot and receive notifications of new additions.

Kurt Turchan (use contact us at bottom of site to RSVP or get in touch with Kurt).

“Many photos have been liberated from attics, and some of the stories are very moving, and humbling, with many mysteries solved. One avid contributor and now editor for the site, Kevin Charles, owes his existence to the Walrus pilot who plucked his father out of the sea after he bailed out into the ocean off Italy. Kevin focuses on the North African and Italian campaigns, adding pilots from squadrons that served there, like his father's 601 Squadron.

Editor’s Note: Kevin will be at the IWM Duxford Battle of Britain Airshow September 21 and 22, representing allspitfirepilots.org., the theme of which is the 1969 classic Battle of Britain film, featuring Michael Caine, released some 50 years ago.

“One contributor from Australia was called a liar for telling his schoolfriends his grand-father, Sgt Alan Feary of 609 Squadron flying out of Warmwell was a Battle of Britain ace. Young Gerard went on to research and prove his story and to add several of his grandfather's mates to the site.”

“Another contributor from the United States interviewed her father, Captain M. Balan in India, and shared his superb quote Flying a Spitfire was like being pulled across the sky by many dragons”.

“Flight Lieutenant Tony Snell was downed behind enemy lines in Sicily. During his evasion attempt, he was captured near an enemy airfield and accused of being a spy. While facing a firing squad, he decided to run away, taking several bullets as he ran. Thereafter, he was captured and escaped several times, before eventually reaching Switzerland with the help of Partisans. After the war, he opened a Cabaret on a small Caribbean Island and lived a life filled with music, sailing and entertaining customers with his songs.”

"The Hurricane flew in greater numbers during the Battle of Britain, but the initial site focus is on the Spitfire as it was in continuous service throughout the war in campaigns all around the globe. A complete Spitfire serials database provided by Andrew Pentland allowed the project to begin and as the project continues other aircraft types may be added."