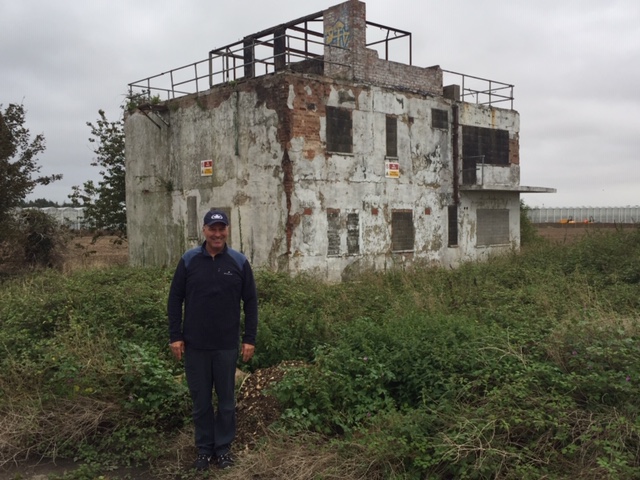 Day 2 turned out not to be as far as feared, and, came in at about 20 miles. Just the same, it was 20 miles of up and down the South Downs. Because the goal that evening was the open invite pub night in Chichester (at what is now Wetherspoons, but in WWII was frequented by the airmen, as was the Unicorn which is no longer a pub) we made our stop in Cocking at the Moonlight B&B. Getting in early at 1 p.m. from our start at East Meon (Sustainability Centre) doesn't mean it was easy. The South Downs up top are heaven, and they felt close to it in the mist shrouded forests and open pastures, we saw few people up there, just a few hikers (that seemed to pass us time to time -- they hike fast in England!).

The uphills were long and the long sweeping downhills, often on flowy single-track at high speed are a mountain bikers dream. We rented our bikes from Chalkpit Trails, our Specializeed rock hopper bikes from owners Abigail and Dave were fantastic, perfect for traversing the South Downs 100 mile epic. Technical enough in parts, both my buddy Mark and I were glad for the skills we picked up over the years in Canada. The Downs aren't that technical, but going down at speed or slowly grinding up was more enjoyable with the background in mountain biking, picking lines makes all the difference. On some long downhills on the soft grass, at times I felt like I was floating, or even flying. Sweeping views below the downs, and, big open sky.

Which brings us to the next part of the day. Ron Powell, author of Wings Over Summer, drove down from Wales to meet us at our B&B and then take us to the Tangmere Aviation Museum, which, has a huge amount of archival material, displays, and, a full size replica of the prototype Spitfire. We had a personal tour and learned quite a bit about the K5054 Spitfire, and, some of it's unique features like the two blade propeller and the landing gear alert system. My goal in getting to the site, admittedly, was to see the Tangmere Control Tower, derelict and at risk, at the end of the runway. A local group is trying to save it, let's hope they do. This was a magical moment, vines, cracks, and peeling paint included, to stand in front of the tower that sent many a fighter pilot up (and SOE Special Ops Spies also!) up into the air to defend Britain. It was under attack by Stuka Dive Bombers as was the case on Aug 16, 1940.

After this, it was over to Chichester for our local meet and greet pub night, where 10 of us gathered to meet and say a few words. I very much thanked those that attended, including two relatives of Spitfire pilots, who have added their pilots to the site. Ron also added some words on how hard it must have been to send 18 and 19 year olds, some with only 15 hours in a Spitfire, into battle. Overall, it was a successful evening, we also had Maxine (Tangmere Archivist) attend with her husband, to share a few stories and she was able to give some background on her work at the museum. Those who attended walked away with our allspitfirepilots.org designed t-shirts, and, a few Spitfire ale glasses donated by Shepheard Neame.

And that concluded a very busy day ... day 3 is off to Fulking from Cocking, and this will be very close to 30 miles of riding the South Downs, fortunately, there is the Shepherd and Dog Pub waiting nearby the AirBnB we are staying at. Sore legs don't matter at this point, we signed up for it, and, we're going to complete this epic trip!