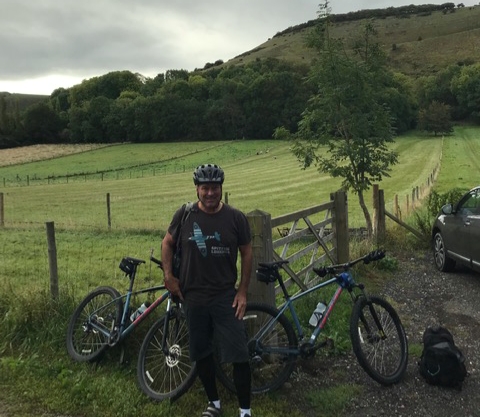 Day 3 and 4 are "get it done days" i.e. cycle approximately 30 miles each day to make up the 60 miles left to go on the South Downs Way. This meant early starts, first from Cocking (a very quaint village with some impressive sculpture art visible behind the church, this famous art-work is known to have been sold to the Queen). Out of Cocking it's straight up, up, and up. On top, we reconnected with some hikers we spoke with at breakfast at the Moonlight B&B. Followed by more down and more up, it's rather relentless, but you start to relish each section; the up grind, the top if you can get some flats and flowey downhills with sweeping views.

We crossed a major highway and went up through a thick forest, finally some great views from up high (really high this time) and once again, hikers who started at this highway juncture below caught us up. Did I mention they are speedy over here. But then, some major downhill sections and we put a lot of miles behind us very quickly. A large lunch break was necessary in the town of Amberly, at the River Cafe. The sun was starting to come out, and the burger and carrot cake fuelled me up the next hill waiting for us within sight. I can't remember all the names of the hills, they are rather iconic, each known for their level of difficulty or unique hill top feature, such as an iron age fort. But if there were Romans or WWII air battles in the air above, today you mostly have sheep lazily grazing or making begrudging efforts to move out of your way as you speed down by bike. A long day sees us pass a youth hostel (with food) that we wish we had stopped at other than for snickers bars, but we were told thankfully that Fulking wasn't much further. Still it was down and off the Downs, so we took a direct (and I mean direct) trail down to Fulking on a 45 degree angle, arrriving quickly for the daily pint and then the B&B. Can't say how great a shower is after 7 hours of cycling.

Which is pretty much what Day 4 was about, except we started even earlier, knowing our final day was long. Very long. 8.5 hours of cycling from Fulking (back up the Downs) to Eastbourne, the terminus of the 100 mile epic. More of the same, this time a very memorable long (1 mile) speedy downhill on a cement right of way (path) that wasn't steep just straight and again that flying feeling with open sky around you and views below, speeds certainly of 50km an hour. Lots of single track also, 6 to 8" wide of dirt (a nice change from the bumpy flint rock embedded trail -- but hey, the Romans put a few of these down so kudos to them) and a lot of flow. Just what a mountain biker dreams of. Could this be some of the sweetest single track on earth, maybe. And possibly because at the bottom you often have a hobbit like Medieval town. We aren't that far from London, so you do see some fantastic real estate / cottages, this is some of the most picturesque countryside you'll ever see. Maybe that's what makes the mountain biking, certainly different than British Columbia forests, so appealing. The combination of great trail riding, and then, small villages and rest stops. One more stop at a youth hostel about 2/3 of the way (and more carrot cake) and it's on to the final 10 miles. Up another down in what seemed to go on climbing forever, but up top now the sky was dominant, as about a dozen paragliders were riding the thermals and updrafts filling the sky. Some more chats with friendly locals who pointed out Eastbourne.

Now, we see the sea and Eastbourne in the distance. We can taste it, the finish. Some more up and downs, another medieval era village (Alfriston -- we biked through but did not stop other than a few pics) then across another river and a final huge uphill, up up and seemingly up into the clouds, we just kept climbing. Up top, we take a break, and enjoy the relative flat, our destination is within reach but still it required some more ascents and descents, just not as major. I comment that I feel like a stable horse at the end of the ride, and my buddy says I smell like one (a stable) too. Sure, it's been 4 sweat filled days of cycling, but worth every climb and mile. The South Downs are a very special place, how lucky to ride 100 miles and taste the sky each day worrying about nothing really, just the next turn of the trail.

Day 5 is off (Sat) and Day 6 is over to Capel Le Ferne for Battle of Britain Day and the flypast.