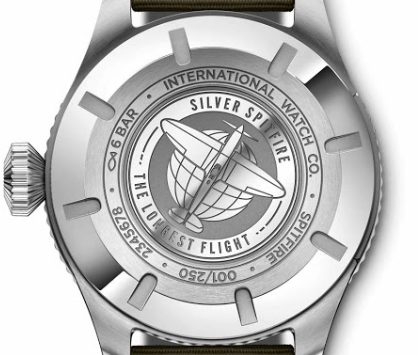 About half way around the world now, the Goodwood origin Silver Spitfire (and team) are flying around the world, likely stopping near a town near you (or maybe already has)! Go to silverspitfire.com to learn more about this historic world first.

The aircraft, built in 1943, will cover more than 43,000 kilometres over several months, visiting some 30 countries on its way. The circumnavigation honours the quintessential design and unparalleled engineering of the iconic British plane. The expedition is the brainchild of Steve Boultbee-Brooks and Matt Jones, founders of the Boultbee Flight Academy, based on the Goodwood Estate in the south of England. IWC is establishing a long-term partnership with the first official Spitfire flying academy.

The remainder is the original press release from 2018 describing the project in anticipation of the current tour.

"Iconic British Spitfire Aircraft to be Restored for a New Audience in a World First Circumnavigation of the Globe Today marks the official launch of an extraordinary project which will come to fruition in Summer 2019 when a newly restored original Mk IX Spitfire aircraft will begin a spectacular flight around the world. Flown by British pilots Matt Jones and Steve Brooks, the iconic aircraft will depart from the UK westwards and embark on a journey of more than four months in a physically, mechanically and logistically challenging adventure. Silver Spitfire - The Longest Flight is a world-first project to fly a newly restored original Spitfire aircraft around the world in a celebration of engineering, design excellence and as an inspiration to all those who
will experience this unique aircraft in some of the world’s most iconic and beautiful locations. The expedition is the brainchild of British pilots Matt Jones and Steve Brooks. They located a long-lost Spitfire aircraft and are restoring it into a shining silver aircraft. Starting in summer 2019, they want to bring this aircraft to a global audience in a flight around the world, which will cover a distance of approximately 27,000 miles. The expedition’s principal sponsor is IWC Schaffhausen, a leading manufacturer of Pilot’s Watches from Switzerland. Matt Jones said: “The decision to fly the Silver Spitfire around the world was an instinctive one to honour the plane’s history, the people who built, maintained and flew it through more than 50 missions, and we want to commemorate those who lost their lives in the pursuit of freedom. It’s going to be exciting to bring the Spitfire back to many of the places it has served and to fly it for audiences who will see this beautiful and historic machine for the very first time”. Accompanying pilots Matt Jones and Steve Brooks are Project Director Lachlan Monro and Chief Engineer Gerry Jones, who are passionate about bringing the Silver Spitfire to a new audience and fulfilling their long-held dreams of flying this historic aircraft around the world. Steve Brooks commented: “Our aim for the flight is to inspire everyone who encounters this wonderful Silver Spitfire to achieve their ambitions,

however daring, unusual or challenging. The chance to showcase this piece of British precision engineering for a truly global audience is a pilot’s Everest and an unmissable opportunity.” Silver Spitfire – The Longest Flight is also a celebration of the people, the engineering and the design of this classic aircraft as the ‘best of British’. In the 100th anniversary year of the British Royal Air Force, the flying masterpiece is restored and presented to audiences around the world. The GREAT Britain campaign is proud to support the expedition which will tell the story of British engineering to audiences all around the world. International Trade Secretary, Dr Liam Fox MP, said: “The Spitfire is an iconic symbol of world-class aerospace engineering, and I’m delighted to see this unique piece of British history brought to a global audience. Extraordinary projects such as this are exactly what the GREAT campaign is there to promote - showcasing the best of Britain to the world, encouraging people to visit, study and do business here.”
post comment