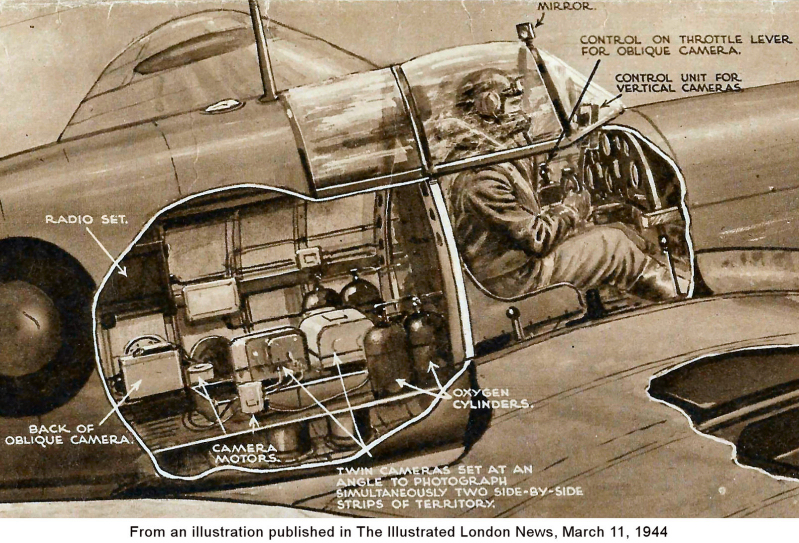 Photo Reconnaissance Spitfires - What are they and who flew them!?

editors note: This article was submitted by John Bendixsen, son of PRU pilot Flt. Lt. John Bendixsen, who kept detailed notes and an enormous catalog of aerial photos from his WWII missions, many of which have been passed along to me (sub pens, V1 rocket sites, dice missions, bridges, ships). PRU pilots often flew just off the deck on a dice mission, and in John's father's case, flew 100 feet off the deck in Germany to get a close up of a V1 rocket site (we're waiting for that elusive pic!). For any enthusiasts of PRU Spitfires, please read on -- and should you have a PRU Spitfire pilot to add, please click add pilot and we'll build the list. There are a few others on the site, see the squadron list below and I'll point out a few others on the site in time (check back). Of course, the entry for John S Blyth (US) on this site has a link to a now rather famous SUNDANCE film festival documentary with original footage showing Blyth on a dangerous crash land on returning from a PRU mission.

In the Autumn of 1939, the Royal Air Force formally took over a civilian photo reconnaissance unit based at Heston. The unit had previously been contracted by MI6 to perform clandestine photographic reconnaissance over Europe, using civilian registered Lockheed 12A aircraft.

The Unit was to evolve into a high level, high speed reconnaissance unit with aircraft sufficiently fast and high up to avoid interception. The Supermarine Spitfire, then coming into mass production, was chosen for adaptation to the new task.

The special Spitfires were fitted with two vertical telephoto cameras installed behind the pilotís cockpit. Photographs were taken through apertures in the floor of the fuselage. The cameras were accessible through hinged panels on port and starboard sides. Additionally, an oblique camera was mounted to obtain photos through the side of the fuselage, aimed by the pilot using a sighting line on the port wing tip.

The new Flight went through several redesignations, becoming No. 1 Photographic Reconnaissance Unit on November 14, 1940. On October 18, 1942, 1 PRU was disbanded and the individual Flights of the Unit were redesignated as five separate squadrons, Nos. 540, 541, 542, 543 and 544 Squadrons (click these links to see the pilots added to this site in these squadrons - hint: anyone can add a pilot so we hope to see more added especially for 542 and 544).

Combining height with speed, the reconnaissance Spitfires were able to elude most attempts at interception by the enemy. The technical quality of their cameras enabled them to operate at high altitudes without sacrificing the quality of the photographs obtained.

It should be noted that unarmed PRU Spitfires were not totally defenseless owing to their speed and agility. On October 10, 1944, Flight Lieutenant Garvey, flying Spitfire XIX, RM 637, outmaneuvered a Focke-Wulf 190 at very low altitude resulting in the 190 crashing. From the Operations Log, ìP.R. unarmed Spit XIX claims one FW 190 destroyed.î

Some photographic sorties require the aircraft to take photographs of exceptionally small targets which can only be found by flying at tree top height over the countryside at high speed. These missions were known as a "dice" based on throwing dice at a crap table. One can not determine how successful the mission has been until the photos come out of the soup. The aircraft can be so close to the target that the pilot can see the individual gunners firing at him, as was the case on several missions my father flew.