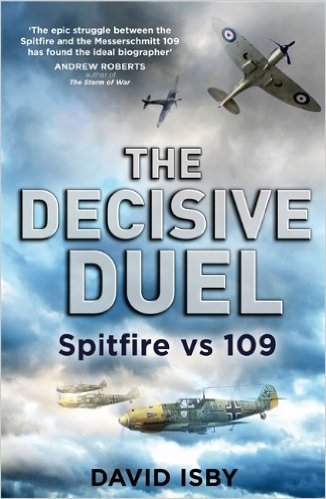 From time to time, we'll feature a book that includes the Spitfire or Spitfire pilots. Any user is welcome to add comments to this post suggesting another good book, or, submit a review, or just wait until we read another and post the review here. I am currently reading "The Decisive Duel: Spitfire vs 109:" by David Isby. First, the overview from Amazon itself, then, the review below.

"London, 15 September 1940. In and out of the clouds above the British capital, one of the most decisive battles of the Second World War was taking place. The Luftwaffe's massive air assault aimed to force Britain to sue for peace or, by seizing air superiority, make possible the cross-Channel invasion Hitler's generals were planning. Churchill himself watched the climactic battle unfold from the RAF operations room in Uxbridge. He asked what reserves the British had in the battle over London: 'There are none', came the reply. Every available squadron was in the air.

The air battle over Britain shaped the course of the entire war. But the fight that day was itself shaped by the duel between the two most advanced types of warring fighter planes: the British Supermarine Spitfire and the German Messerschmitt Bf 109. In this remarkable new book, David Isby looks at the clash between these two fighter planes, lasting from pre-war development to decisive combat.

The Decisive Duel tells the stories of these iconic, classic aircraft and also the people who created them: Willy Messerschmitt, the German designer with a love for gliders and admiration for Hitler; RJ Mitchell, his brilliant British counterpart, who struggled against illness to complete the design of the Spitfire. In fascinating detail, Isby describes the crucial role the two opposed planes played, from the drawing boards, to Dunkirk, the Battle of Britain, to the final battles over Germany.

In today's Britain, the Spitfire's story is particularly resonant both for its wartime achievements and its continuing potency as a symbol of victory. Accessibly written and impeccably researched, The Decisive Duel is both a wonderful work of aviation history, and a valuable insight into the duel between two fighters that shaped the Second World War."

So first off, this book is incredible in it's detail, it will make the engineer in us thrilled with the details of design as both Germany and Britain raced to build their air weaponry before the outbreak of WWII. Apart from telling the story of the Spitfire, and, with equal attention to the Bf 109, the reader gets an overlay timeline of the deteriorating political climate that lead to WWII. With inside views to the ministry, the RAF, Churchill's influence, the main characters seem like they have been interviewed by Isby himself. The same insight is given for the Luftwaffe, Willy Messerschmitt, his allies and competitors, Goring, and Hitler's inner circle, as they put Britain into a panic long before the sweep into Poland and Czechoslovakia. Britain was more than concerned, and, the thin veil over Germany's aggressive bomber and fighter manufacture puts the British Government and RJ Mitchell himself into nothing less than a harried round the clock race against time. The Brits were way behind and didn't begin to out produce the Luftwaffe until the thick of battle in the summer of 1940. The book goes into enough technical detail to thrill the aviation enthusiast, but then, as war breaks out we get to the battles, the profiles on specific pilots, and the statistics.

Each Chapter weaves these same pilots into the plot, as the book moves from Dunkirk where the experienced German pilots (many who gained experience in the Spanish civil war where the 109 was first used) gained respect for the Spitfire. We get pilot profiles from the experienced, such as Galland, of the Luftwaffe, to the RAF aces and others who may have been lucky to escape their initial duels. One such RAF pilot, was lucky to escape Galland after bailing out, then, survive 4 more departures from a doomed Spitfire, ultimately surviving the war. RAF pilots give their accounts of their battles, victories, and, brushes with death as well.

The tactics, the rise and fall of certain squadrons and leaders, the paranoia of the fighter pilot who had to twist constantly to look for the enemy, the vertical fighting ability of the 109, the turning ability of the Spitfire. Both 109 and Spitfire had to near stall for the tightest turns they could manage in order to get behind an adversary. Isby writes that if a Spitfire pilot (or 109 with it's exceptional slash and dive ability) saw the enemy before it was too late, the odds were they would escape, or at least live after bailing out. Not always of course. But, the enemy attacking from high up, coming from the sun, was usually deadly. Isby paints the picture of life and death in the Battle of Britain, and, well, that's where I am now, finishing up with the Battle of Britain and moving into the next great air battle, the Battle of Malta. After demotion, Park is then given operational command of Malta, and, here again, the Spitfire shines and is brought in desperately to help out - and just in time. A number of Canadian aces flew in the battle. Many never made it to Malta after carrier launch, or, survived there for very long.

The first third of the book devoted to the designers, the politicians, airforce commanders, and, the timeline and numbers of construction and first flights of the Spitfire and 109. The rest is all action and I can't put the book down. Sure, we know the outcome, but Isby gives great insight into Air Chief Marshal Park's brilliant use of limited Spitfire and Hurricane resources to fend off the Luftwaffe during the Battle of Britain. You'll get all the numbers, Spitfire vs 109, and, you'll get the pilot profiles, and, the parallel story of the aircraft development. But Mr. Isby, why didn't you include Spitfire serial numbers, we need those!

Isby points out several instances in the Battle of Britain (i.e. Sept 15) where for example, a high cover was placed over London, while advanced fighter groups went out towards the channel to meet the attackers, attempting to peel off the 109 escorts. The Luftwaffe often had their own advanced "hunter" 109 squadrons, the escorts (flying at lower speed had a mechanical disadvantage due to wing loading characteristics) who stayed with the He 111 and Do's, and, high cover. It's clear the Spitfires were matched as much as possible against the superb 109, which had an advantage in the vertical, while, the Spitfire exceeded in it's lower speed turning ability, critical when attacking the fighters escorting slower bombers. It's hard to keep all the mechanics straight in your head. 109 pilots often used their flaps in tight high speed turns at near stall conditions to really work their aircraft. Thanks to the background he's given you, you know the almost recumbent 109 pilot had to exert a much greater force on the stick to recover after a sharp dive. Yet, the early war gave the diving and climbing advantage to the Bf 109. You get a pretty clear picture of how the experienced pilot in either aircraft could win over a less experienced enemy pilot. Isby the defence analyst has these two aircraft covered, you get the impression he is reporting on current events, as if it's unfolding overseas now.

But back to an earlier point, the Hurricane was often in reserve to attack the bombers (in straight on attacks) once the Spitfire had eliminated or reduced the effectiveness of the 109 escort. This does give some perspective on the Hurricane vs Spitfire debate about which was the hero of the Battle of Britain. The answer, they were both heroes. Without the Spitfire, the 109 did not have an equal adversary, and the RAF would have been defeated, the Hurricane at a clear disadvantage to the 109. The more advanced Spitfire, while in great numbers, was not numerous enough to match the hordes of enemy aircraft (the numbers fully given in the book) thrown at them. Yes, it's true the Hurricane downed more aircraft (if I recall, in a 3/2 ratio vs the Spitfire), but, it might be fair to say the Spitfire was pitted mostly against the Bf 109, the Hurricane pitted mostly against the advancing bombers. Without 109 escort, the Hurricane and Spitfire squadrons waiting near London could put up a fight and defeat the attacking bombers to protect London as much as possible. And it worked, with every last squadron in the air on September 15th, British Pilots, Canadians, Australians, Americans, Polish.

The miscalculations and flaws of the Luftwaffe are pointed out in detail. If you have one book to pick up to get into the Spitfire, the 109, and the timeline, this could be it. You will almost be smelling high octane aviation fuel the bowsers brought to the dispersal sites as RAF pilots flew repeated missions during the Battle of Britain. You will certainly take your time reading this book, wanting it to go faster -- as I am -- but unable to absorb it all to move the page as quickly as you want to. Is that a flaw of the book or it's strength. I'd say a strength, but keep in mind the author is a defence analyst, and lawyer, so he likely errs on the side of detail and fact. But this is the background you need in order to read the more fanciful books on the wishlist, and, we already have another lined up.

My next book, will be Ron Powell's "Wings over Summer" built around the story of a WWII pilot that inspired him as a child. Ron has added Laurie Whitbread to this site, and, we really appreciate Ron's personal addition. As an RAF pilot, officer, and now author, I am pleased to offer a chance to win a copy of Ron's book. We purchased two copies to give away. How do you get in the draw, just add a pilot, each pilot you add gets you a chance to win one of two books. The draw will be around Christmas 2015, and check the blog section for a review of Ron's book around then, and, maybe you'll be able to add to our review after you win a paperback copy that we'll mail to you!

On a final note, you don't have to be either a defence analyst, a retired military pilot, or an author to add a pilot story to this site. All you have to do is find a pilot story out there (or "in there", i.e. the RAF archives), and, fill out our form to add a pilot. You don't need much, and, you don't have to copy information from other sites, you can just add a link. Just as we've already brought together a number of links, images, and, aircraft serial # information for several hundred pilots, so can you. Or someone else can come along later to add a bit more. Looking for a way to start, just log in, cruise the Spitfire database looking for a pilot name in the Spitfire history notes, and, if this pilot is not already on our site, then, add the pilot. To add a pilot page, you just need the name, rank, country of birth, and, whatever other information you may have.