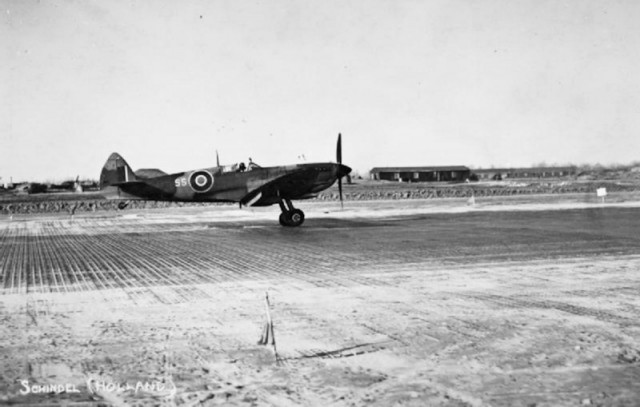 From the link on right to the Abe Books listing ... this is the text associated with the book sale.

"82 pages, plates, cloth, DJ, very good. From the estate of aviation collector Colin Kidd and with his embossed label. From the DJ: "Ralph William Frazer Sampson was born in South America of Scottish parents. Schooled in Scotland he joined the London Scottish Territorials in 1937 and soon after war was declared he was commissioned in the 6th Battalion, Queen's Own Cameron Highlanders. In late 1940, bored with inactivity, he transferred to the RAF, trained as a fighter pilot and in June 1942 joined No. 602 (City of Glasgow) Squadron. He participated in the Dieppe operation in August, then became a flight commander with 131 (County of Kent) Squadron in December, seeing considerable action during operations over Northern France, which led to the award of the DFC.

Following a period as Sector Gunnery Officer at Exeter in 1944 he became Squadron Leader Tactics at 10 Group of Fighter Command. After the invasion of France he was given command of 127 Squadron on the Continent but then in January 1945 took command of No. 145 (Free French) Fighter Wing. At the end of the war he received a bar to his DFC and the French Croix de Guerre. 'Sammy' (as he is widely known) Sampson, in cooperation with aviation historian Norman Franks, has written a graphic account of his three years flying Spitfires on offensive operations over France and from continental bases in France and Holland. He has covered in some detail his period commanding the Free French Wing, of which little has been recorded in Britain. In this he has been helped by a number of his former pilots, many of whom went on to gain high rank in the Armee de 1'Air.

His story is told with pace, spice and honesty and his recollections of people and events provide a refreshing insight into the life of a wartime fighter pilot, already renowned as a baffler, having played rugby for Scotland in 1939. After the war he continued playing with the Barbarians, the Co-optimists, London Scottish and represented Scotland again in 1947. In 1952 he was persuaded to become Wing Commander i/c the Glasgow and West of Scotland Wing of the Air Training Corps, a post he held for 18 years, during which he became an OBE (Mil).

Following his retirement both from work and the ATC, he and his wife moved to Benenden in Kent, where they have established their home. He retains his interest in the RAF, rugby and local Kentish organisations and associations and keeps in touch with a number of his friends who were former pilots in the Free French Spitfire Wing. This book is testimony to the courage of them all."