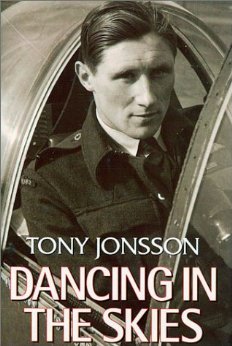 < = expand >
Although his mother was English, and Jonsson aspired to join the RAF as a child, he was told by the British legation in Iceland that he was ineligible on account of his nationality. However, he took passage to England by trawler and enlisted at Padgate in 1940.
As a sergeant pilot, Jonsson flew hurricanes with 17 Squadron at Elgin; he then served in 111 Squadron, flying Spitfires first at North Weald and later in North Africa in connection with Operation Torch, during which Jonsson was awarded the Distinguished Flying Medal by King George VI. He was later commissioned on a second tour of duty with 65 Squadron, he flew Mustangs over France and Bomber escort to Germany.

Jonsson is credited officially with having shot down five enemy planes (though claims have been made for eight), making him Iceland's only second-world-war ace. He published a wartime memoir called Dancing in the Skies in 1994.


From another site (PPrUNE) credited left, a copy of his obituary from the times;

What a man - what a career.

Thorsteinn Jonsson. .Icelandic RAF fighter ace who later flew pilgrims to Mecca and food supplies to the starving of Biafra. . . . . .THE only Icelander to become an RAF fighter ace during the Second World War, Thorsteinn (Tony) Jonsson flew Hurricanes, Spitfires and Mustangs on operations ranging from the November 1942 Torch landings in North Africa, to dogfights over the Normandy beachhead. Returning home after the war, he piloted Dakotas on skis in Greenland, jumbo jet freighters in the Far East, and took part in aid flights into Biafra. . .Jonsson’s mother was an English nurse and he was always known to all his British friends as Tony. His Icelandic father had worked as a translator in London during the First World War.

Brought up in Iceland, Jonsson developed a passion for flying while at school, but was mocked for his ambition to join the wartime RAF by classmates who told him he would not live long because the RAF would soon be overwhelmed.

Although he was told by the British legation in Iceland that he would not be accepted for the RAF because of his nationality, Jonsson wangled a passage on a trawler from Hafnarfjörur to Fleetwood and got on to the RAF aircrew training scheme. In the first volume of his autobiography, Dancing in the Skies (1994), he records the heady experience of his first solo flight in a Tiger Moth from a field outside Leicester and of the camaraderie of the group which then graduated to Spitfires and Hurricanes.

Perhaps it was his instinct to flout rules which marked him as fighter pilot material. On one occasion, authorised to practise aerobatics at 10,000 feet over Scotland, he returned with branches of pine tree in the engine. As a sergeant pilot Jonsson flew Hurricanes in 17 Squadron at Elgin and was then posted to 111 Squadron at North Weald. Here there was constant action, chasing — and being chased by — Me109s.

In 1942 in Operation Torch, the Anglo-American landings in North Africa, he and his comrades of 111 Squadron flew hastily uncrated Spitfires from Gibraltar to Algiers. In the next few weeks they fought a series of rolling dogfights along the coast as the Allies advanced, and Jonsson was awarded the DFM. He was later commissioned. In 1944, on a second tour, he flew Mustangs over Normandy and he ended the war with an official score of five enemy aircraft destroyed, though the total was probably nearer eight, with several others damaged.

After the war Jonsson returned to Iceland and flew DC3s on the country’s first internal air routes for a company based in a Nissen hut at Reykjavik airport. Resourceful flying with few radio aids and constantly unpredictable weather exactly suited his temperament. He piloted Dakotas and DC4s on international routes for both Icelandair and Loftleiir.

With the dissolution of his marriage to his English wife Marianne, he married Mabba, one of his Dakota stewardesses and the daughter of Ólafur Thors, four times Iceland’s Prime Minister. After his marriage he often took his father-in-law on flights abroad and even taught him to fly straight and level.

Soon tiring of routine, in the late 1950s Jonsson was attracted by the chance of flying in the Congo for Sabena. He took his new wife and family to Kinshasa and alternated flying Dakotas around jungle airstrips with a contract to deliver pilgrims to Mecca. As the country slid towards chaos, the Prime Minister, Patrice Lumumba, chartered a Dakota to tour election meetings and Jonsson was ordered to be his personal pilot. In his second book, Lucky No 13 (1996), Jonsson recalled having to fly a DC4 to Brazzaville with a desperate overloading of passengers, who had scrambled aboard in panic as gunfire broke out. When flying in the Congo became impossible Jonsson returned to the North and flew ice patrols over the east Greenland coast.

He next flew in aid shipments to the starving people of Biafra in the Nigerian Civil War. Based at São Tome off the West African coast, he co-ordinated flights of DC6s and Lockheed Constellations which delivered food supplies for Nordchurchaid in a series of daring night flights to Uli in Biafra. Jonsson flew 413 of these missions at night, landing on a strip of road with primitive lighting which was only switched on at the last minute of the approach.

Apart from the dangers of such conditions he also had to contend with trigger-happy Biafran troops and a South African mercenary pilot working for the Nigerians, who attempted to bomb the airfield and stop the supplies. In 16 months Jonsson and his colleagues were able to import hundreds of tons of relief food.

Towards the end of his career Jonsson converted to jets and flew jumbos for Cargolux in Luxembourg. When he retired after 47 years as a pilot, having logged 36,000 hours, he was able to devote more time to his third wife Katrin Thordardottir, and to fishing, watercolour painting and writing. Katrin died of cancer in 1994 at the age of 52. Jonsson is survived by six of his seven children.

Amazon - get his book Dancing in the Skies