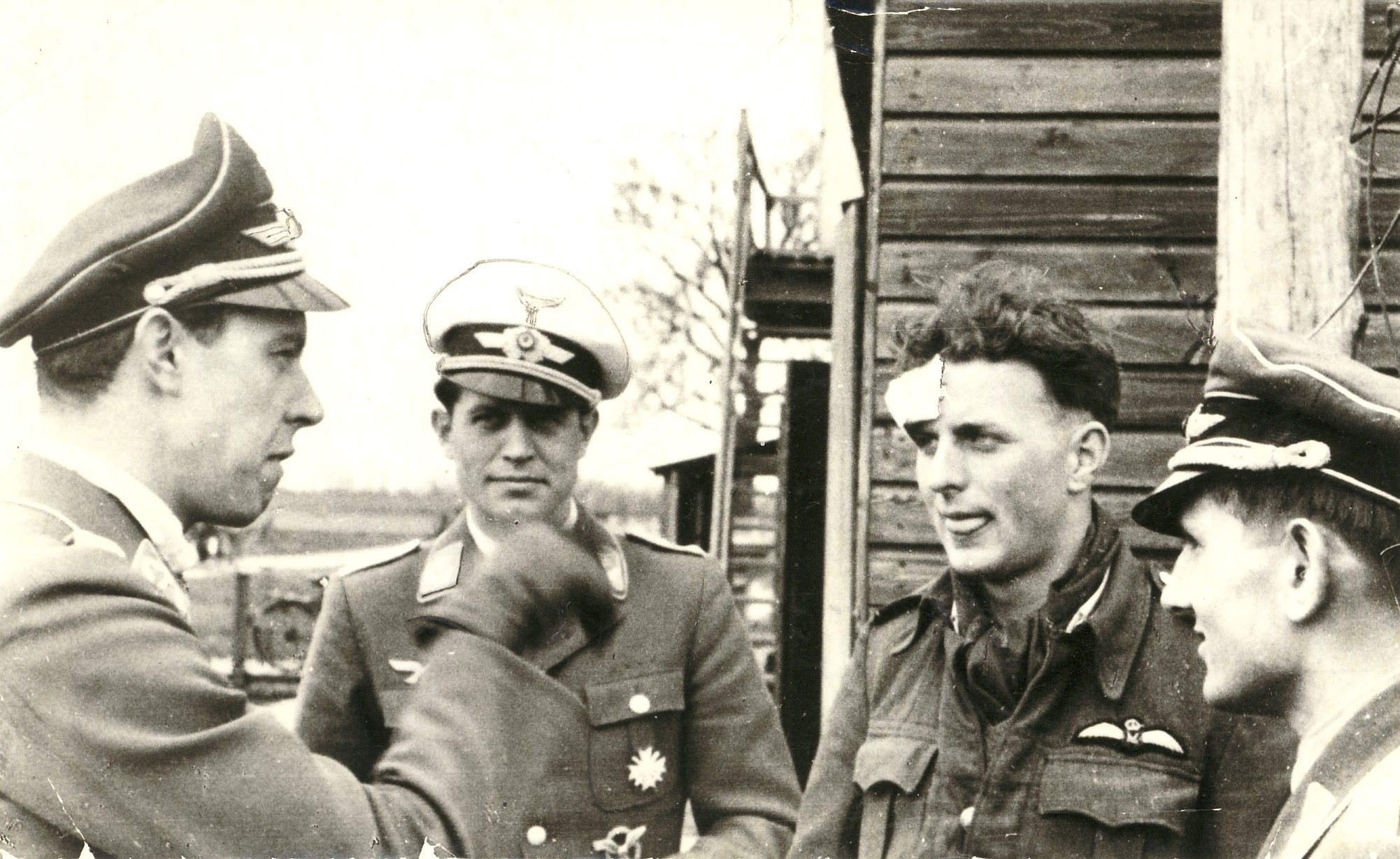 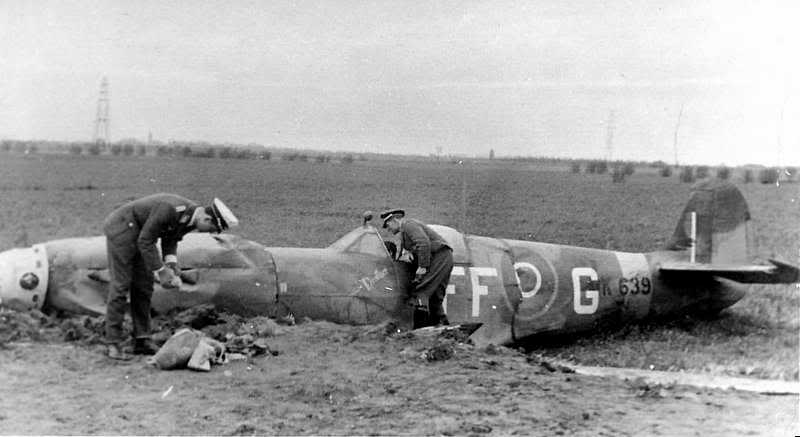 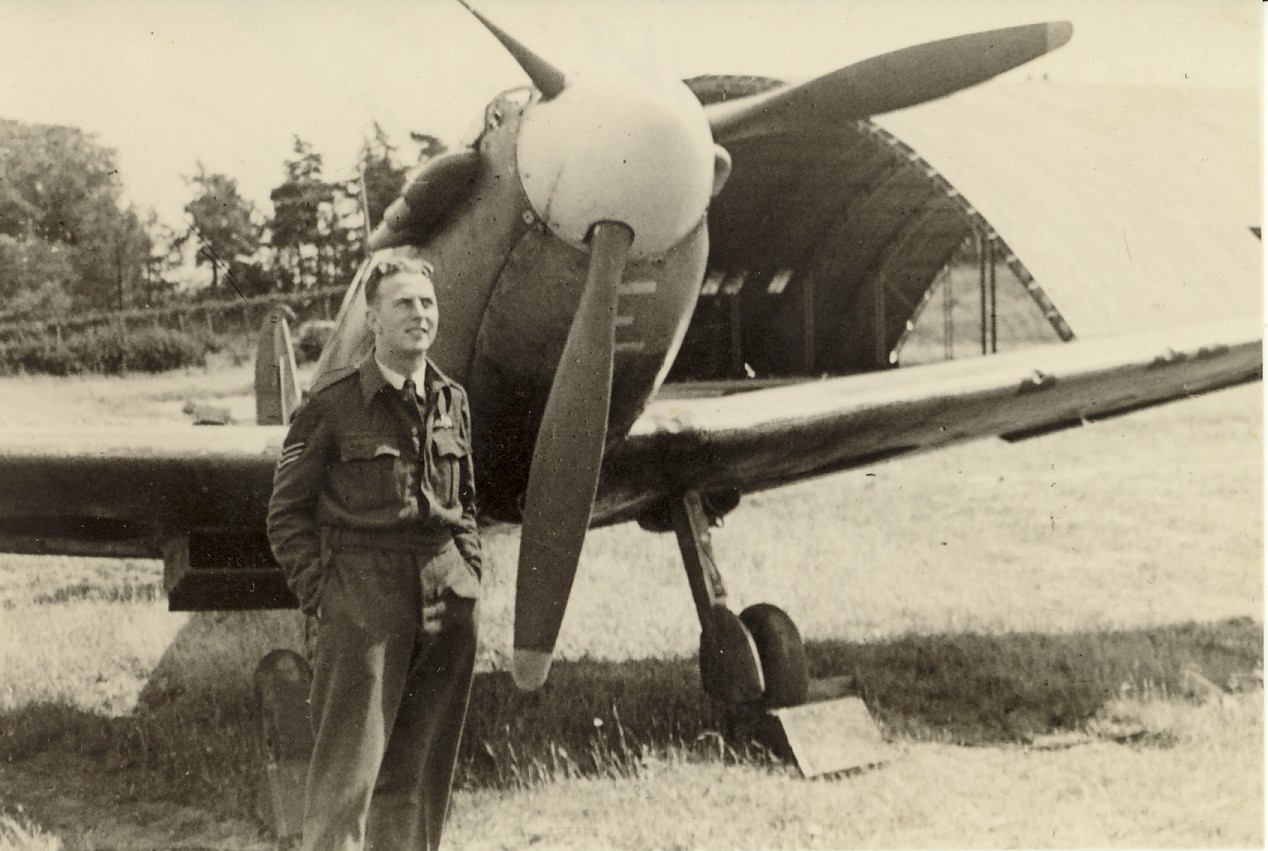 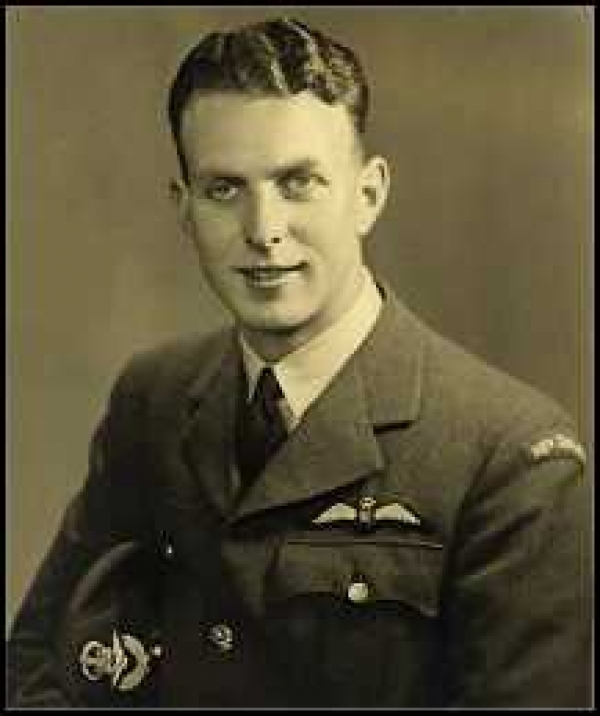 He was shot down while over Holland in April 1944.

The following story/ interview, “Conflict, Hardship and Friendship” was published in the RNZAF News after the war.

In a brief and violent encounter in April 1944, New Zealand-trained Spitfire pilot, Flying Officer John Caulton, met Messershcmitt BF110 pilot, Hans Joachim Jabs (pronounced “Yarbs”), over the skies of Holland. Inauspiciously, it was to be the end of Flight Lieutenant Caulton’s Spitfire flying days. But the day also saw the inkling of a friendship that was forged and rekindled nearly 30 years later. In an excerpt from an interview with Air Force Historian Bee Dawson, the now retired businessman John Caulton takes up the story of conflict, hardship and friendship.

The day it happened to me – the person who shot me down had been down to Saint Trond, an airfield he’d been on, and he was creeping back, low level, to Arnhem where he was based. He appeared out of the fog in front of me. So it was a head on attack, of which I came off worst because he had two 37 mm along the line of sight and I had two 20s … So it was a one off for him.

“So, you were literally outgunned?”
“You might say that – and very surprised! I said some rude words and then flew on … I had to drop my tank on the way because it took the bottom from that.”

My tank was taken out and my leading edge had a big hole in it, which I think in a way saved my life – it opened up the wing and pulled me round. I realised I was in deep trouble because when I turned to have another go, I saw a great big plume of petrol, which I dropped immediately – a 90 gallon tank. I knew I couldn’t go on to Germany and by that time it was all happening – of the six aeroplanes in the flight, which Geoffrey Page was leading, one was killed, I was shot down and everyone else got nicked. The flak was very intense — one lost his hood and the other…

I was on the edge of that because I was leading the left hand section … I realised and turned, but the engine got rough and lost its oil. I got about 30 odd miles away and then I felt it catch fire. So I put it down and rang up my boss, Geoffrey the CO, and said what was happening.

“You put it down in a field?”
“Yes, between some canals as I thought, but I hadn’t bargained on a little grassy one that I hit just as I touched down. Because you had a very good chance of getting away – the Underground were pretty well briefed and helpful. I rang Page and said I was ready to put down and he said: “I’m sorry, but I can’t help you Old Man”, in his very English voice. “Start walking!”
So then it all happened and I didn’t speak to him again.

I was prepared for a rough careen across the ground, but I hadn’t bargained on hitting a bank straight off – I touched down, the props broke off and then I hit this bank. I couldn’t feel my leg at all. It wasn’t very long until a Dutch fellow came across – I got out and stepped out, but couldn’t feel my leg because my kneecap had been smashed. It was unpleasant and there were cuts and bits and pieces everywhere. The gun sight had hit me on the head – I wasn’t completely knocked out, but it wasn’t far off.

He helped me up – he was dead keen to help me, and yet we were only 60 yards from this post, a two storied building, manned by Luftwaffe soldiers. So they suddenly arrived. I was sitting there feeling very sore and sad, and heard a voice behind me and looked around and was looking up the little round hole of a sub-machine gun. Then he came round and checked me out. I never carried a revolver … and when he found I didn’t have one he was quite happy – more relaxed.

There was the Dutch boy, and suddenly a priest arrived and between the two of them I was helped back to that post. I sat down there and they gave me something to eat, a cold boiled egg, which was kind of them – it was 3 pm.

They must have rung Arnhem to say they had a prisoner and then the pilot who shot me down came over. He told me later on that he wasn’t supposed to go. The Political Officer on the station told him he wasn’t to, but he was a leading ace – 50 destroyed (48 until that day) and he said, “I’ve just shot him down and I’m going over to see what he looks like.”

“Can you remember meeting him?”
“Oh yes. I saw this car arrive and I thought somebody was going to collect me. There were four in the car and there was no room for anyone extra. I saw him coming across the small bridge of the small canal that was near the hut, and there was a knock on the door and I said, “Come in”. And in he came, and stood there and saluted, and I stood up and acknowledged it – with some difficulty and pain.

And he said: “Were you flying the Spitfire?”
And I said, “Yes.”
And he said, “‘Well, I was flying the other.” He spoke in English, understandable English with a little bit of sign language.
And then he said, “Do you mind having some photographs taken?”
And then he asked when the invasion was (it was six weeks before the invasion) and I said, “Well, Churchill hasn’t told me, and if he had I wouldn’t be telling you …”
And he said, “I shouldn’t have asked …”
That was the tone of the discussion.
I said, “Well you haven’t got a show …” and in his letter, 26 years later, he said “… you said we couldn’t win.”
Anyway, then they went down and had a look at the aeroplane, where those pictures were taken and they went off. (See photo.) Caulton 1
Then came along another car with two rather evil looking people. They were field security police – they had a chain around their neck with this big oval plate with “Field Security Police” on it… It’s a very lonely feeling when you’re in a country where nobody wants to talk to you. They said nothing but motioned to me to get into the car into the back seat with my parachute. It was a lift up seat and he put it down on my foot which made me gulp with pain, so I pushed it forward and he didn’t say anything – he just turned round slowly and looked at me, which I thought was an indication to me to shut up! Then they took me to Arnhem Camp, 30 off miles away, and I was just put into a cell on my own.

“You’d have been pretty scared…”
“Not at that stage. In the car I was a bit worried, concerned about saying the wrong thing, but then I was put into solitary. There was a wooden bench and a stool, and for the life of me I couldn’t get up onto the bench to lie down. I noticed that the stool was about six inches lower so with a lot of grimacing I got up onto that and lay down, with a lot of grunts and groans.

Then this little man, a Sergeant Major I suppose, kept on screaming at me – they scream an awful lot, particularly when they’ve got a gun. You don’t know what’s going to happen next because you don’t understand the language. So he pushed me into the cells, and after a long time I lay down on the bench. I hadn’t been there for half an hour when he came in screaming again, “Aus!”
With a lot of agony I got off the thing and was taken to an absolutely identical cell – one stool and one bench, nothing else. I called him a few names, but he didn’t understand them. I thought I had it set – so I put the stool against the bench and got up on the stool with my good leg and as I went to step across the stool went – it slid from behind me and I ended up against the wall with a thud.

And this character rushed in and he completely changed from being an arrogant little … and went to help me up, but I wouldn’t allow him and took a swipe at him because he’d been the cause of it by making me change rooms. I missed him, but he went out and left the door open and brought two prisoners out of another cell and they lifted me up. Then I was taken to another room again, where I had a bed with a kapok mattress on it! I was laid on this and then he sent for the doctor. Then he kept on coming in to see how I was.

The photo is of some of the Luftwaffe Officers having a talk with John after he was gathered up by the Wermacht. caulton 2

The doctor came in with a field pack and put an aluminium splint on the leg, which was a damned nuisance really – walking with a splint with no crutch. And he gave me an injection with the biggest needle I’d ever seen. I thought it was going to hit the bone and break off – it was like a 3″ nail. He told me to pull my tweeds down and he threw it like a dart. It was for tetanus.

The next day we were taken away in a bus – a whole bus full of us – up to Amsterdam and we were locked up there for about ten days, until they’d gathered enough for a trainload.

“You weren’t with the Gestapo at this time?”
“No, they’d all disappeared. We were with Luftwaffe soldiers. The Luftwaffe were under obligation to keep their own prisoners. I was lucky to have them from the word go.”

John Caulton spent almost exactly a year as a POW before returning to England, marrying his English bride and spending a further year with the RAF. After that returned to the Hawkes Bay in New Zealand.

In the 1960s, he read a book by a Luftwaffe ace, Hans Joachim Jabs. His eldest daughter, then travelling to the UK in 1970/72, with the assistance of John’s brother in law, who was at that time in the Forces Security, managed to track down the former ace.

Caulton wrote to him, and in 1972 the pair met during a trip to Europe. It was a “liquid occasion” with old time memories and reminiscences cementing the “new” friendship. In 1975, Caulton visited the field where he was shot down and met the Dutch farm worker who had saved him.

Any further info of my Grandfather John .J. Caulton or his friends in 132 Squadron would be greatly appreciated.