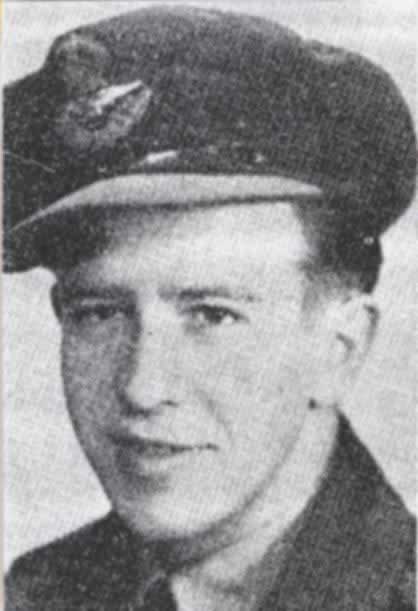 < = expand >
Service Details: Prior to serving in the RNZAF, Don had spent a short time in the New Zealand Territorials. He applied to join the RNZAF as a pilot in January 1942, at the age of 18. He enlisted at RNZAF Station Taieri, Dunedin, on the 11th of July 1942, to undergo his initial training.

He completed this flying training course on the 29th of December 1942, receiving his Wings on this date. However he remained with the school for more advanced training, and on the completion of this on the 6th of March 1943, Don was commissioned and promoted to the rank of Pilot Officer.

In early April 1943 Don embarked on a troopship destined for England. He arrived on the 11th of May 1943, and after a period at a reception centre, he proceeded the following month to No. 7 Advanced Flying Unit at Peterborough, Northamptonshire. This course saw him flying Miles Master advanced trainers until the beginning of August 1943.

At that point Don proceeded to No. 53 Operational Training Unit at Kirton-on-Lindsey, Lincolnshire, to convert onto single seat fighters - namely the Supermarine Spitfire.

In November 1943, with all his training completed, Don was posted to No. 485 (NZ) Squadron, the New Zealand Spitfire Squadron, at Drem in East Lothian, Scotland.

During March Don was attached to No. 12 Armament Practice Camp at Llanbedr in Wales for a short course, before returning to the squadron at Hornchurch. In April 1944 the squadron and Don moved again, this time to Selsey in Sussex. From this base, Don became engaged in a number of operational missions over enemy territory, carrying out such duties as escorting bombers on raids, and dive-bombing targets in France.

In early May 1944, Don spent another short period attached to No. 17 Armament Practice Camp in Southend, Essex - returning again to No. 485 Squadron on completing the camp.

In June 1944 Don was very active with his fellow squadron members over the D-Day Normandy beachhead. The squadron moved at the end of June to spend short periods at Coolham and Tangmere, and then on the 31st of August 1944, they moved to Basinville Airfield, near Caen in France. In September they moved again to Par de Calais, operating from a much more modern airfield.

On the 30th of September 1944, Don had taken part in the dive-bombing of the German garrison in Calais, following a 24-hour armistice, during which French civilians were allowed to leave the city.

In early November 1944, as the front line shifted eastwards, Don and the squadron shifted again, to Maldegem in Belgium. On the 6th of November Don returned to Britain for a fortnight, at which time he was stationed at Fairwood Common, in Glamorganshire, Wales. After this short break he returned to the squadron at Maldegem.

On the 6th of December 1944 Don made his first operational flight over Germany itself.

Don's final move was to the airfield at Gilze-Rijen in Holland. As well as those airfields mentioned where No. 485 Sqn was based in Europe, they had also spent very short periods at a number of other airfields in France and the Low Countries, and Don had also visited a number of airfields simply to refuel his aircraft.

Don had carried out nearly 120 operational flights by the time he was killed. These had ranged from defensive patrols to offensive sorties, as well as close support work with Allied soldiers on the ground. He had destroyed an impressive amount of enemy trains and transports.