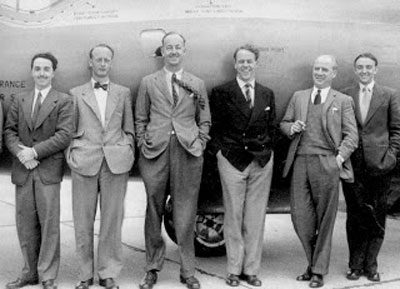 < = expand >
Henry (Harry) Noel Dawson Bailey was born on 15th December 1917. He took his engineering degree with honours at Hull Technical College and joined Rolls Royce in 1938 as an engineering apprentice,later working on aero-engine development.

He joined the RAFVR in September 1938 as an Airman u/t Pilot and carried out his weekend flying at Derby.

With his training completed, Bailey went to 7 OTU Hawarden on 7th September and after converting to Spitfires joined 54 Squadron at Catterick on the 28th.

He remained with the squadron until September 1941, when, as an Acting Flight Lieutenant he was posted to 58 OTU Grangemouth as a Flight Commander instructor.

Bailey joined an Air Ministry Unit attached to Rolls Royce in Derby and Hucknall for flying duties in January 1942 and remained there until March 1946, when he was released from the RAF as a Squadron Leader.

He had flown forty seven different aircraft types and in the course of his duties with Rolls-Royce had visited sixty countries around the world.

Group Photo:- A gathering of Test Pilots, Bailey is second on the left.