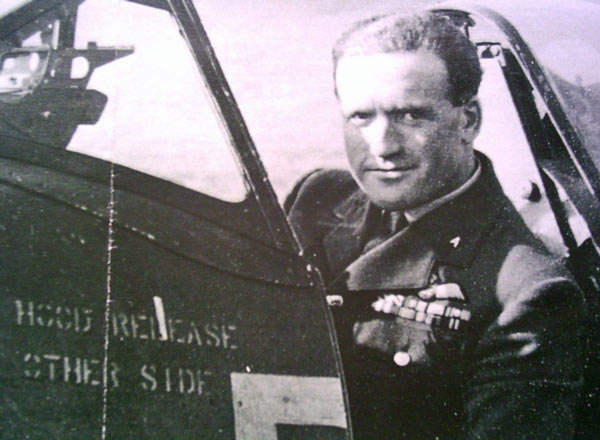 < = expand >
Cyril Stanley Bamberger was born in Port Sunlight on 4th May 1919. After leaving school in 1934 he began a five-year electrical engineering apprenticeship at Lever Brothers. He joined 610 Squadron Auxiliary Air Force in 1936 as an Aircraft hand.

He remustered as an Airman u/t Pilot in April 1939. Bamberger was called to full-time service on 24th August 1939 and on 8th October he was posted from 610 Squadron to 8 EFTS Woodley. He later went to 9 FTS Hullavington to complete his training and he rejoined 610 at Biggin Hill on 27th July 1940.

With no experience on Spitfires he was posted to 7 OTU Hawarden on 30th July. After converting to Spitfires Bamberger rejoined 610 on 12th August.

He claimed a Me109 probably destroyed on 28th August. He was posted to 41 Squadron at Hornchurch on 17th September and on the 23rd he damaged a Me109 and on 5th October he shot down another.

After volunteering for service in Malta Bamberger left 41 on 19th October 1940. On the 21st he went to RAF Northolt where he spent an hour flying one of 615 Squadron's Hurricanes, his first experience in the aircraft.

Bamberger then went direct to King George V Dock in Glasgow and reported to HMS Argus on the 23rd, he then sailed for Malta. Luckily for him he did not fly off for Malta with the twelve Hurricanes and two navigating Skuas that did. Only five of the fourteen aircraft reached their destination.

Bamberger eventually reached Malta on 28th November on the destroyer HMS Hotspur and on arrival he joined 261 Squadron. On 18th January 1941 he destroyed a Ju87 and another the next day. 261 Squadron was disbanded on 21st May 1941. Bamberger had moved on the 12th to the newly-formed 185 Squadron at Hal Far.

He was posted back to England on 12th June and sent to the Central Gunnery School at Sutton Bridge. Commissioned in February 1942, he was posted to Northern Ireland as a Gunnery Officer, serving with Americans who were converting to Spitfires.

In March 1943 Bamberger volunteered to serve in North Africa and he joined 93 Squadron at Hal Far, Malta in May. On 13th July, operating over Sicily, he shot down a Ju87. In August Bamberger joined 243 Squadron in Sicily as a Flight Commander.

On 16th October Bamberger damaged a Me109, his first success after 243 crossed to Italy. On 25th May 1944 he claimed a Me109 destroyed and on 15th June a Mc202 damaged. Bamberger came off operations in July for medical reasons and returned to the UK.

He was sent on an instructors course and in early 1945 was posted to the Gunnery School at Catfoss.

Released from the RAF in 1946, Bamberger returned to Lever Brothers and rejoined 610 Squadron at Hooton Park, becoming its CO in 1950.

When the Korean crisis came he was recalled to the RAF. In February 1951 he was granted a Permanent Commission and in May 1952 he moved to an Intelligence unit, assessing strike capabilities of the Chinese and Korean forces.

Bamberger retired on 29th January 1959 as a Squadron Leader and became Managing Director of a small packaging materials company which he had started in 1954. On retirement he had an antique shop in Hampshire.

In 2011 a plaque in his honour was unveiled at St. John Plessington Catholic College, Bebington, Cheshire.