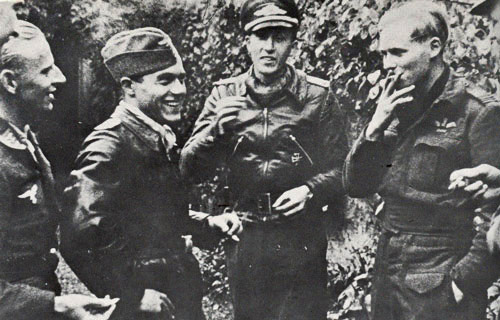 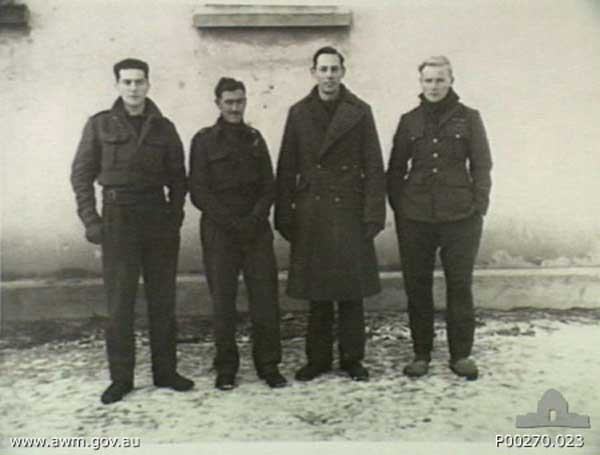 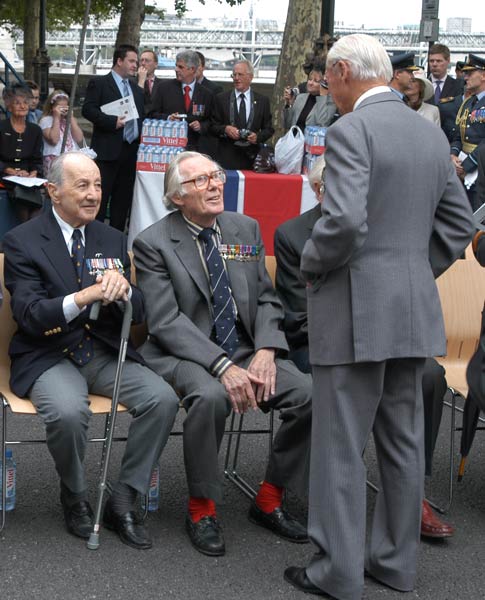 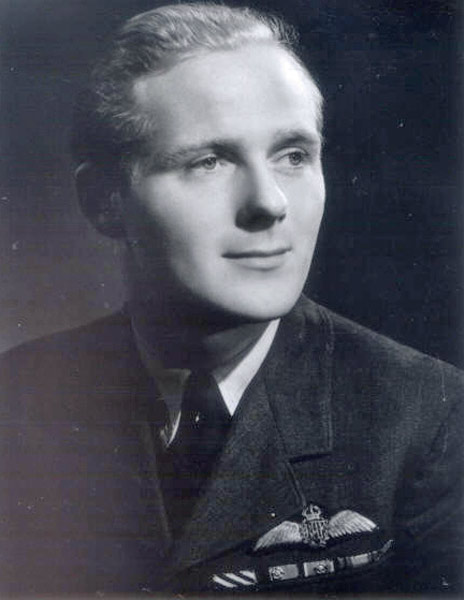 < = expand >
Patrick Peter Colum Barthropp was born in Dublin on 9th November 1920 on a family visit there. His mother died while giving birth.

His father, a distinguished amateur steeplechase rider, introduced Paddy, as he was always known, to riding and he was tutored by the champion jockey Steve Donoghue.

He was educated at St. Augustines Abbey School, Ramsgate, then St. Josephs College near Market Drayton followed by Ampleforth College, North Yorkshire after which he went to the Rover motor company on an engineering apprenticeship.

As a candidate for a short service commission he began his elementary flying at 13 E&RFTS White Waltham on 31st October 1938.

After a short induction course at No. 1 RAF Depot Uxbridge he was posted to 7 FTS Peterborough on 31st January 1939 and completed his training in late July. After a month at No. 1 Armament Training Camp Catfoss, Barthropp went to No. 1 School of Army Co-operation Old Sarum on the day the war started. On 9th October 1939 he was posted to 613 (AC) Squadron at Odiham.

He recorded the following operation:

One memorable day in May 1940 six Hawker Hectors from 613 Squadron took off at dawn from Odiham and landed at Hawkinge. About 11am while sitting on the grass we were briefed by Air Marshal Sir Edgar Ludlow Hewitt that we had been chosen to stem the German advance.

The Hector was an ancient biplane powered by a Napier Halford engine with 24 cylinders and 48 plugs. Trouble was that at 6000 revolutions the cylinders didn't always know what the plugs were up to. In addition it had a Vickers .303 machine gun firing through the propeller somehow tied up with the camshaft. Occasionally the gun got out of synch with the camshaft and would remove the propeller in mid air. Goodbye one Hector.

At about 2pm six aircraft, as the Americans would say, 'left the verdant green pastures of England with their hydromatic Rotol air-screws whipping the air into an invisible froth' and headed towards Calais which was on fire with acrid smoke from the oil tanks filling the air. We were told to fly line astern to our leader Squadron Leader Anderson. This order was disobeyed as Andy was 28 years old and our little band of five, aged about 19, were certain that at his advanced age he would suffer a heart attack over the target if indeed we could find one. Not to worry, we pressed on doing, I am sure, no damage to the Germans. I remember having a squirt in Calais harbour at what seemed to be enemy soldiers but were probably unsuspecting French fishermen. My Air Gunner, an AC2 MacKinnon, with no experience whatsoever, was seated behind me armed with a Lewis gun prone to what was called a Number One stoppage. Impossible to rectify in the air. It got one.

Home Sweet Home to a heroes welcome but not quite. Those of us who had survived German flak were dealt with by the Royal Navy.

On arrival at Hawkinge I was signalled by Al Edy on his Aldis lamp that my 120lb blockbuster bomb was dangling dangerously, only held by the rear lug. Best landing I did in 22 years - a daisy cutter! Whoever thought out his farcical episode should have been court-martialled. Reminiscent of those brave chaps in Fairey Battles who were sent on non-productive suicide missions. Few survived, two Victoria Crosses awarded.

One young man, Rupert Parkhouse, a young Cranwell cadet, spent five years as a Prisoner-of-War only to be told when he got home that one third of his service pay was deducted and that he didn't qualify for the Air Crew Europe Star as he had not completed sufficient time in an Operational Squadron.

Our little group got two DFC's and four Mentioned in Despatches. Funny old world isn't it ?


Barthropp volunteered to serve in Fighter Command in August 1940. On the 21st he was sent to 7 OTU Hawarden to convert to Spitfires and on 8th September he joined 602 Squadron at Westhampnett. He flew four sorties on the 15th.

At about this time Barthropp acquired a two-litre Lagonda in exchange for 400 gallons of 100-octane aviation fuel. His groundcrew fitted a 25-gallon tank under the car's back seat and this, he later said, "gave me an extra supply of juice to keep me ahead of the game when I set off for pastures green".

One evening he wrote off the car in a collision with a London taxi. On another occasion he and a colleague were fined £1 for assaulting the proprietor of the Red Lion Hotel, Hounslow after they were refused entry to a dance. When Barthropp called the magistrate a 'silly old bastard ' the fine was doubled.

On 24th August 1941 Barthropp rejoined 610 Squadron as 'B' Flight Commander. He was awarded the DFC (gazetted 26th September 1941) and posted to 61 OTU Heston on 23rd October as an instructor.

He pursued an active social life in Shropshire. On returning from a party at Oswestry he drove his latest car into a lake after missing a turn. This proved to be the last straw for his commanding officer, who decided that Barthropp was not setting a good example to the students, and arranged for him to be sent back to an operational squadron.

He returned to operations on 15th May 1942, joining 122 Squadron at Hornchurch.

Two days later on Ramrod 33, an escort for six Bostons bombing a factory at Ambleteuse, Barthropp shot down a Fw190. But shortly afterwards his controls were shot away by another Fw190 over Audruicq, near St. Omer. He baled out of Spitfire Vb AR400 and was captured on landing.

That evening he met the pilot who had shot him down. Claimed by Hauptman Karl Willius JG26.

Four weeks later Barthropp arrived at Stalag Luft III at Sagan, where he and a colleague attempted to escape by hiding in a drain covered by a manhole cover. They were soon detected.

Over a period of 18 months Barthropp spent 100 days in solitary confinement for a serious of misdemeanours. He took part in the 'Great Escape' but was still in the tunnel when the alarm was raised.

As a consequence he was sent to Oflag XXIB at Schubin in Poland, a Straflager for persistent escapees. He organised a breakout through a 30-yard-long tunnel. Of the 32 who got out four were murdered by the Gestapo and two were thought to have drowned trying to cross the Baltic to Sweden in a stolen sailing craft.

Barthropp and a companion headed for Warsaw hoping to make contact with the Polish underground with a view to getting away to Yugoslavia through a partisan escape line. Travelling by night in the bitter cold he was on occasions given shelter in their barns by friendly Polish peasants. But in the end exhaustion overpowered him and he was captured while asleep in a horsebox in a railway station yard.

He was returned to Oflag XXIB, where at the end of January 1945 he was with other inmates assembled for what became known as the 'Long March' westwards. In temperatures of minus 20, with little food and less water, the sufferings of the PoWs on the march were acute. Barthropp reached Lübeck where he was liberated in May.

Barthropp managed to acquire a Mercedes fire engine and he and a friend drove it to Brussels via Hamburg.

Barthropp remained in the RAF, working in Norway locating the graves of missing airmen - he received the Order of King Haakon to add to an earlier Cross of Lorraine awarded by the French government, and was mentioned in dispatches.

On 2nd January 1946 Barthropp began a course at the Empire Test Pilots School Cranfield, followed by a posting on 23rd May to a Fighter Test Squadron at the Aeroplane and Armament Experimental Establishment at Boscombe Down. After a period in Khartoum, responsible for hot weather trials of the Meteor jet fighter, in mid-1948 he was posted to HQ Fighter Command at Bentley Priory, as Ops Day.

In March 1952 Barthropp went to RAF Waterbeach as Wing Commander Flying. In 1953 he led a formation of twenty-four Meteors in the Coronation Review Flypast.

He was awarded the AFC (gazetted 10th June 1954) for his work at Waterbeach.

In 1954 Barthropp left for an administrative post at the Air Headquarters in Hong Kong, an appointment for which he had little enthusiasm. He delegated most of his responsibilities to a junior officer and a corporal. This allowed him to take up horse racing, and he became a successful jockey, winning a number of races at the Happy Valley racecourse.

After commanding RAF Honiley, the home of two Royal Auxiliary Air Force jet fighter squadrons, he was made the senior administration officer at RAF Coltishall in Norfolk.

Barthropp found administration dreary and accepted his release under a 'golden bowler' scheme, retiring on 28th December 1957 as a Squadron Leader.

He used his gratuity and part of an inheritance to buy a Bentley and a Rolls-Royce Phantom VI.

Dressed in an expensive chauffeurs outfit he started to drive wealthy clients around Britain. Over the next few years his luxury car-hire business became very successful and he soon owned a fleet of Rolls-Royces. One of his cars featured in the James Bond film Casino Royale.

He was a great supporter of the Battle of Britain Fighter Association and for many years fought to get ex-PoWs the back pay they were denied. He greatly enjoyed country life, particularly shooting and fishing.

Photos
1. Barthropp above at right with Hauptman Karl Willius (2nd from left - lost on the Eastern Front in 1944) who had shot him down.

3. Barthropp, seated with red socks, at the unveiling of the Battle of Britain London Monument in September 2005.