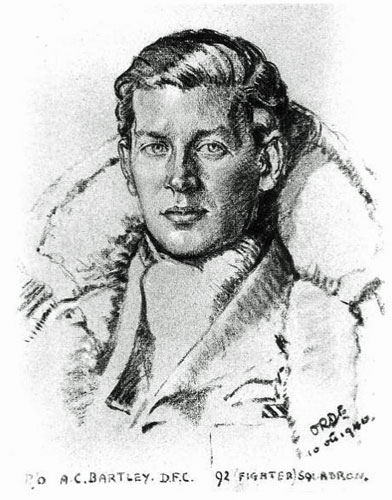 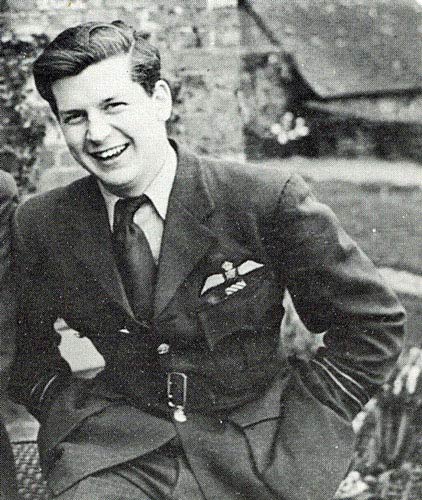 < = expand >
Anthony Charles Bartley was born on 28th March 1919 at Dacca in India. His father, Sir Charles Bartley, was an Irish barrister who served as a judge in the Calcutta High Court.

Bartley was educated at Stowe and learned to fly at the West Malling Flying Club in 1938. He joined the RAF on a short service commission and did his elementary flying at 6 E&RFTS Sywell from 23rd January 1939.

Bartley went to No. 1 RAF Depot Uxbridge on 1st April and was posted to 13 FTS Drem on the 15th. With his training completed, Bartley was posted to 92 Squadron at Tangmere on 22nd October but went directly from 13 FTS to a Blenheim conversion course at RAF Hendon, on attachment from 92. He joined the squadron on 20th November 1939.

The squadron began to convert to Spitfires in March 1940.

He was awarded the DFC (gazetted 25th October 1940), the citation crediting him with at least eight enemy aircraft destroyed.

It was a short posting and he left the squadron in May to go to 56 OTU Sutton Bridge, moving soon afterwards to 53 OTU Heston. In June he served briefly at 61 OTU as an instructor. In July he was posted to Vickers-Supermarine as a production test pilot.

During this time he performed the acrobatics for the film 'The First of The Few' (1942) which chronicled the life of the Spitfire's designer, R J Mitchell, played by Leslie Howard.

At Vickers-Supermarine, Bartley forged a fruitful relationship with Jeffrey Quill, who had been the second pilot to fly Mitchell's prototype and was now senior test pilot. Quill particularly welcomed Bartley's combat experience of the Spitfire's early 20mm cannon installations, which had proved problematic.

On one occasion Quill refused to provide Bartley with a Spitfire to return to Worthy Down from a party at Heston airfield in London. Quill was horrified to discover that Bartley, large though he was, had instead crammed into the confined cockpit of a Spitfire with another bulky officer, putting both their lives and the aircraft at risk.

Bartley returned to operations in February 1942, as a Flight Commander with 65 Squadron at Debden. On 27th April he damaged a Fw190 on a sweep over France. In early May he took command of the squadron after the CO was killed. In July 1942 he went to CGS Sutton Bridge for a course and in August he was given command of 111 Squadron at Kenley.

The squadron was destined for overseas service and on 20th October sailed for Gibraltar. Bartley led the squadron off on 11th November and flew to Algiers, moving to Bone three days later.

In mid-January 1943 Bartley was posted from the squadron and on the 29th he left Gibraltar, in a Liberator, for the UK.

Following the loss of two engines, the aircraft made a crash-landing on a Welsh airfield. Bartley was awarded a Bar to the DFC (gazetted 16th February 1943) and was posted in May to HQ 83 Group Redhill, to help train squadrons in ground attack and army support.

In early October he sailed for America, for a course at the Command and General Staff School at Fort Leavenworth, Kansas, moving in February 1944 to the School of Air Tactics at Orlando, Texas.

After returning to Britain in the Queen Elizabeth in April, he was posted, as Liaison Officer, to the 70th Fighter Wing of the US Ninth Air Force. On 24th October 1944 he went to RAF Transport Command, to set up staging posts in Europe.

Bartley volunteered for service in the Far East and sailed from Liverpool on the Mauretania on 3rd July 1945. He reached Sydney on 8th August and was posted a week later to the Palau Islands, to set up a Transport Command staging post. He requested repatriation, was granted leave, and returned home in a DC-4, which was returning to England for a major overhaul.

On 28th November 1945 Bartley married film actress Deborah Kerr. After release from the RAF in 1946 he joined Vickers Armstrong as a test pilot and sales executive.

Soon after he moved to Hollywood. After studying film production with MGM, he formed European-American Productions and wrote and produced television films for Fireside Theatre, MCA and Douglas Fairbanks Presents.

Bartley later joined CBS Films where he was responsible for European sales and production. Bartley then joined Associated Rediffusion, the early independent television company, serving as head of the international division and assistant general manager until 1965, when he moved to Canada to represent Global Television and write a history of Canada for the Canada Broadcasting Company.

In the late 1960s Bartley was appointed director of the Caribbean Broadcasting Corporation in Barbados, and in 1971 he moved to Ireland where he formed Intercontinental Telefilms and continued to write and develop television programmes.

His autobiography, Smoke Trails in the Sky, was published in 1984.

amazon - his own book