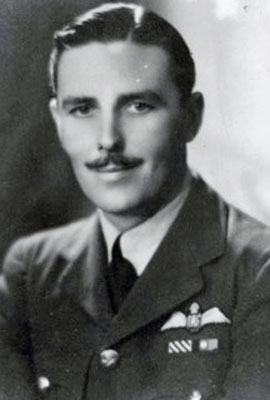 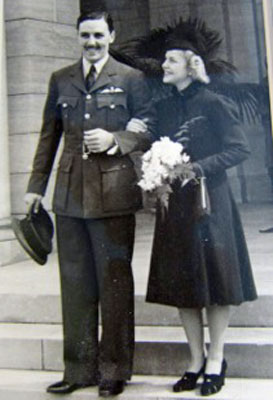 < = expand >
Geoffrey Theodore Baynham was born in Dartford, Kent on 15th December 1915. He was educated at Tonbridge School and went on to be an articled Clerk in a law office. At the same time he joined the 4th Battalion of the Welsh Regiment (TA) and was commissioned.

He resigned this when he joined the RAF on a short service commission, beginning his initial training on 6th October 1938.

Once qualified, his first posting on 12th September 1939 was to 80 Squadron, operating Gladiators at Amriya, Egypt.

While there he met Claude Marie Hélène Bertrand, the daughter of Victor Bertrand, a French Suez Canal Company official. They were married on 14th February 1940 at Eglise Saint-François de Sales, Ismailia, Egypt. (Photo 2)

Baynham was posted back to the UK in early 1940, his wife travelled with him and was later to join the staff of General de Gaulle’s Free French government.

Baynham was posted to 12 OTU Benson to convert to the Fairey Battle light bomber and went on to 4 (C) Ferry Pilot Pool at Kemble on 15th June 1940. As the Battle squadrons had by then been effectively destroyed by the fighting in France he went to 7 OTU Hawarden on 3rd September to convert to Spitfires.

He moved to 152 Squadron at Warmwell on 4th October and rejoined 234 Squadron, then also at Warmwell, on 21st December 1940.

On 17th July 1941 Baynham engaged four Me109s over the Channel and in twenty seconds destroyed three of them. This was recorded in the London Times the following day:

A Spitfire pilot who tackled four Me109s over the English Channel yesterday afternoon destroyed three of them, states the Air Ministry News Service. The pilot, a Flying Officer, said afterwards 'I was flying at 20,000 ft. and surprised the four Me109s at 17,000ft. My first burst went straight through the cockpit of one aircraft, which caught fire and went down. In less than ten seconds I was firing at the second, and he just blew up.' It was confirmed later that the third enemy fighter crashed.

At the end of his operational tour he went to 53 OTU as an instructor.

Baynham rejoined 152 Squadron, then at Souk-El-Khemis, Egypt on 17th April 1943 as a Flight Commander.

His award of the DFC was reported in the London Gazette of 7th September 1943, the citation on 10th September reads:

Flight Lieutenant Geoffrey Theodore Baynham (41518) Royal Air Force, No. 152 Squadron. This officer has completed a very large number of sorties. He is a skillful flight commander whose example of keenness and devotion to duty has proved most inspiring. Flight Lieutenant Baynham has destroyed six enemy aircraft.

In October 1943 Baynham was assigned to the Rhodesian Air Training Group. There, in December 1943, he was almost killed in a Harvard night crash in which he suffered head injuries and broke his neck and back. He returned to flying duties in June 1944 after spending six months in hospital.

Baynham was released from the RAF on 1st July 1945 retaining the rank of Flight Lieutenant.

He and Claude were divorced in 1947. Geoffrey Baynham then married Felicité Martha Edwards with whom he flew on an epic trip from Great Britain to Rhodesia in a single engined light aircraft.

They settled there and had two sons, Peter and Trevor. In 1980, they moved to Capetown, South Africa where he died on 1st May 1990. His ashes were scattered on Table Top mountain.