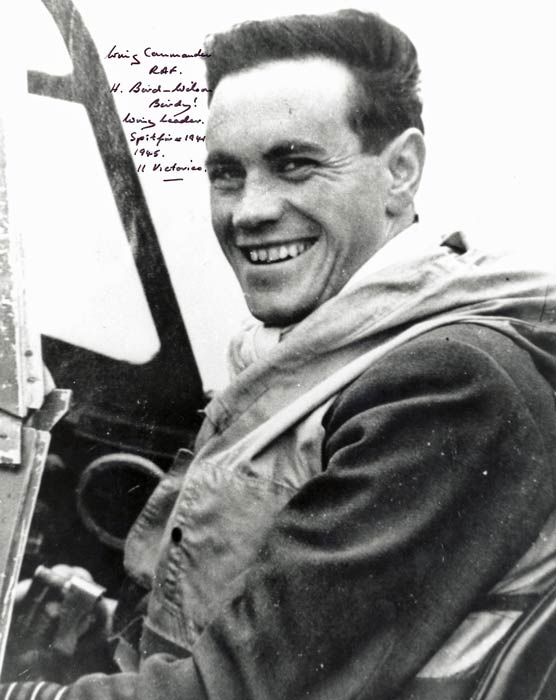 < = expand >
Harold Arthur Cooper Bird-Wilson was born at Prestatyn on 20th November 1919. His father was a Bengal tea-planter and Bird-Wilson was sent to boarding school at the age of four and a half while his parents remained in India.

He went on to Liverpool College and joined the RAF on a short service commission in September 1937. His elementary flying was done at 7 E&RFTS Desford and he completed his training at 3 FTS South Cerney.

In August 1938 Bird-Wilson joined 17 Squadron at Kenley. He was immediately sent to Brough on a navigation course. On 19th September, flying back to Brough in a BA Swallow, he ran into a storm and made for Cranwell. In bad weather he crashed, his pilot passenger was killed. Bird-Wilson had severe facial injuries and was operated on four times by Archie Mclndoe, the last time in October 1939, making him one of the first Guinea Pigs.

Bird-Wilson arrived at 12 Group Pool on 28th December and after converting to Hurricanes he rejoined 17 Squadron on 24th February 1940.

He went to to France with a squadron detachment on 17th May. On the 18th he shared in the destruction of a Do17, on the 19th damaged a Me109 and on the 21st shared a Hs126. The 17 Squadron Hurricanes were withdrawn to England on the 23rd and then took part in operations over Dunkirk. Bird-Wilson damaged a Ju87 on the 25th and shared a Ju88 on the 26th.

17 Squadron returned to France on 5th June and operated from Le Mans and Dinard before withdrawing on the 17th and reaching Tangmere on the 19th, via Jersey.

He was shot down by Adolf Galland on 24th September. He baled out, burned, and was rescued from the sea by an MTB and admitted to the Royal Naval Hospital, Chatham. His Hurricane, P3878, crashed into the sea off Chatham. He returned to 17 Squadron on 1st October and was posted to 56 OTU Sutton Bridge in November 1940 as an instructor.

Bird-Wilson joined 234 Squadron at Warmwell in March 1941 as a Flight Commander and on 11th May he got a probable Me109. He left the squadron and went to 52 OTU Aston Down on 9th August 1941 and on 16th December took command of 'A' Squadron there.

In May 1943 Bird-Wilson was appointed Wing Leader 122 Wing. He was awarded a Bar to the DFC (gazetted 29th October 1943) and rested in January 1944. He was sent to a Command and General Staff Course at Fort Leavenworth, Kansas. He returned to the UK in April and was posted to 85 Group Uxbridge as Wing Commander Training but on 9th June he was appointed to lead the Harrowbeer Spitfire Wing, moving later to lead the Bentwaters Mustang Wing. On 11th August 1944 he shot down a Me109.

For his Wing activities Bird-Wilson was awarded the DSO (gazetted 9th January 1945). In February 1945 he was posted to 11 Group Uxbridge and in May 1945 he took command of 1335 Jet Conversion Unit, Colerne.

In 1945 he was awarded the Czechoslovak Medal of Merit 1st Class and the Dutch DFC.

He then worked in the aerospace industry, mainly in the provision of British equipment to Saudi Arabia.