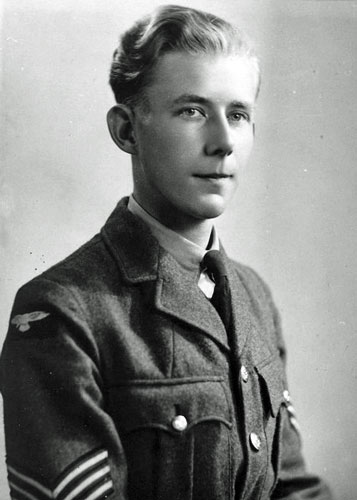 < = expand >
Leslie Raymond Carter of Shenley, Hertfordshire was born in St. Albans on 15th April 1920 and attended school there. On leaving he trained as an aeronautical engineer and also joined the RAFVR on 28th June 1939 as an Airman u/t Pilot.

Called up on 1st September 1939, he was sent to No.1 ITW Cambridge on 2nd October, going on to flying training at 30 EFTS Burnaston until 9th April 1940 then 14 SFTS Kinloss and Cranfield. Carter was awarded his wings on 28th June 1940.

He then went to 7 OTU Hawarden on 10th August 1940 to convert to Spitfires.

He was posted to 74 Squadron at Kirton-in-Lindsey on the 26th but three days later he joined 66 Squadron at Coltishall. When the squadron moved to Kenley that day, Carter remained behind for further training.

He rejoined 66 at Kenley on 7th September. However again the stay was short and Carter was posted to 610 Squadron at Acklington on the 10th. He moved on again on 1st October 1940, joining 41 Squadron at Hornchurch.

On the 11th Carter, whilst climbing to engage Me109's, collided with Fg Off DH O'Neill in X4042. Both pilots baled out but O'Neill's parachute failed to open and he was killed. Carter's Spitfire, X4554, crashed and burned out at South Ash Manor, West Kingsdown. Carter sustained frostbite to his fingers and was assigned to ground duties till they healed.

He was able to make a first flight on 16th December.

Shot down by Hptm Walter Adolf Stab II./JG26 - Wormhout. This would be his 19th victory

He was 21 and is commemorated on the Runnymede Memorial, panel 35.