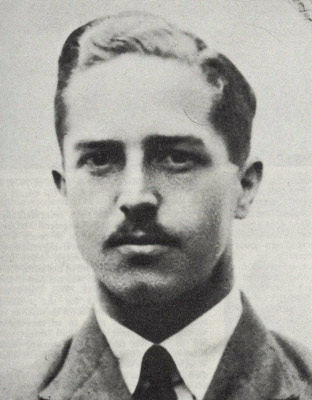 < = expand >
Harry Hutchinson Chalder joined the RAF on 26th August 1935 as a direct-entry Airman u/t Pilot.
His service after the completion of his training is not known but he was serving with 66 Squadron at Duxford on 1st April 1940, when he was commissioned.

Chalder was posted to 266 Squadron at Martlesham Heath on 15th April 1940.

On 12th August the squadron moved temporarily to Eastchurch to carry out possible anti-shipping operations. Early the next morning the Germans attacked Eastchurch, using thirty Do17's. Severe damage to buildings and hangars was inflicted and six aircraft were destroyed on the ground. Five Do17's were destroyed.

Chalder was injured in the foot by a bomb.

Chalder was shot down in a combat over Charing on 28th September 1940 and baled out, seriously wounded, landing near Garlinge Green.

His Spitfire, X4409, was possibly that which exploded over East Stour Farm, Chilham.

He was admitted to Chartham Hospital and died there on 10th November aged 25.