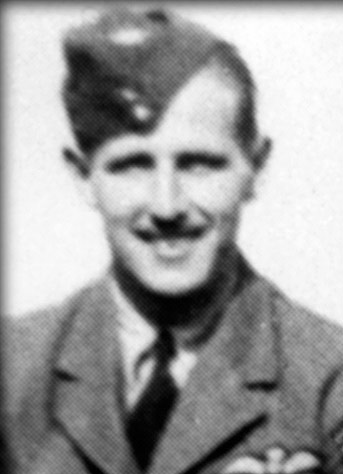 < = expand >
Henry Reginald Clarke joined the RAFVR in Belfast in May 1939 as an Airman u/t Pilot. He made his first solo at 24 E&RFTS in July.

With his training completed he went to 7 OTU Hawarden on 10th August, converted to Spitfires and joined 74 Squadron at Kirton-in-Lindsey on the 26th. He moved on to 66 Squadron at Coltishall on the 28th.

It was again a short stay and on 11th September Clarke joined 610 Squadron at Acklington.

On 30th September 1940 Clarke had an incredible escape. During a practice dog-fight his Spitfire L1037 collided head-on with another Spitfire. Clarke's propeller probably struck the other aircraft's wing. He throttled back immediately, trimmed the nose down, opened the hood, undid his harness and climbed out. After leaving his cockpit Clarke was probably struck by the tailplane.

He passed out and when he came to he was hanging upside down, suspended by one strap which was fastened very insecurely around one leg. Clarke managed to pull himself up and got hold of the rest of the harness but just before reaching the ground he fainted again. His only injury was a deep cut on the chin, caused by his helmet being wrenched off as he left the cockpit, and some bruises.

His parachute pack must have caught on some part of the cockpit and been pulled off, breaking the harness straps, one of which pulled itself tight round one of Clarke's legs when the buckle caught in the loop.

The parachute must have pulled open when the pack was wrenched off. He did not remember pulling the ripcord. The other Spitfire, K9818, crashed on Alnmouth beach, F/O CH Bacon was killed.

Wreckage from Clarke’s aircraft was dug up in 1995 for display in Bamburgh Museum.

Clarke went to 602 Squadron at Prestwick on 16th December 1940, moved to 266 Squadron at Wittering on the 22nd and finally joined 255 Squadron at Kirton-in-Lindsey on 3rd January 1941, initially flying Defiants and later Beaufighters.

Commissioned in August 1941, he stayed with 255 until December 1942, finishing up in North Africa from mid-November. With his tour completed, Clarke returned to the UK.

He became a test pilot and was posted to 23 MU Aldergrove on 18th April 1943 where he remained until released from the RAF on 2nd May 1947 as a Flight Lieutenant.