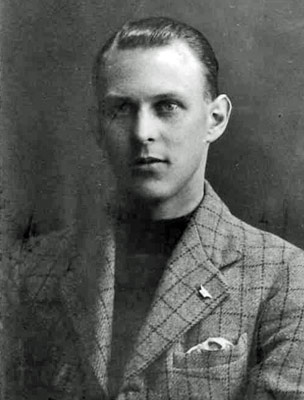 < = expand >
Charles Alfred Cooke was born on 7th June 1912. He joined the RAF about May 1936 as a direct-entry Airman u/t Pilot and began his elementary training on 8th June 1936. He went to No. 1 RAF Depot Uxbridge on 4th August where he was formally enlisted.

Cooke was posted to 3 FTS South Cerney on 22nd August 1936 and after completing his training joined 213 Squadron at Northolt on 25th April 1937.

He was commissioned on 1st April 1940 and joined 66 Squadron at Duxford on the 8th.

On 13th May 1940 six Spitfires of the squadron, with six Defiants of 264 Squadron acting as rear cover, were sent to assist in the evacuation of Queen Wilhelmina from Rotterdam. After a dawn take-off the Spitfires arrived at Rotterdam without incident just as a force of Ju87's, escorted by Me109s, began dive-bombing the city. The pre-arranged plan with the Defiants was abandoned and the Spitfires went for the Ju87's.

Cooke shot one down in flames and damaged another. He pursued a third one down to ground level and it crashed into a haystack and blew up. Cooke climbed back up to 12000 feet and joined what he thought were two Spitfires. On discovering that they were Me109's, Cooke, low on fuel and out of ammunition, climbed into cloud and headed for base. As he broke cloud over the Thames Estuary the anti-aircraft guns opened up on him, fortunately without result.

On 10th July Cooke shared in destroying a Do17 and on 20th August he destroyed a Me110 and on the 21st he damaged a Do17. On 4th September Cooke claimed to have probably destroyed three Me109's.

On this day, in combat with a Me109 over Ashford, Cooke was shot down. He baled out at 20000 feet, with burns to his face and hands. His abandoned aircraft exploded almost immediately afterwards.

Cooke made a delayed drop to 8000 feet, finally landing in the top of a poplar tree in a wood at Ham Street. His Spitfire, R6689, crashed on the crossroads at Chequertree Farm, Aldington.

After rejoining the squadron on 21st September Cooke assumed command of 'B' Flight on 5th October and was promoted to Acting Flight Lieutenant on the 18th.

In December 1941 Cooke took command of 264 Squadron at Colerne. He destroyed a Ju88 in the early hours of 31st July 1942, it crashed at Malvern Wells, Worcestershire.

After the war Cooke stayed in the RAF, in the Secretarial Branch. He was a graduate of the Staff College and retired on 11th July 1958 as a Squadron Leader.