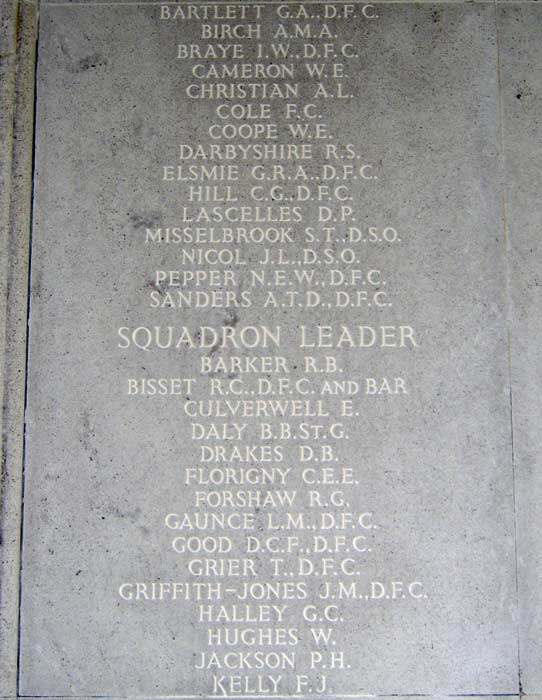 < = expand >
William Edwin Coope was educated at Manchester Grammar School and went on to Oriel College, Oxford where he read Modern Languages. He was a member of the University Air Squadron in 1930 and was commissioned in the RAFO in March 1930. Coope relinquished this commission when he was granted a Permanent Commission as a University Entrant on 24th October 1931.

He was posted to 3 FTS Grantham and on completing the course he joined 33 Squadron at Bicester on 27th March 1932. In October 1933 he went to the School of Naval Co-operation. In April 1935 Coope was given a staff job at No. 1 Air Defence Group, London.

He became Assistant Air Attache in Berlin on 12th November 1935 and held the post until January 1939, when he went as a supernumerary to No. 1 RAF Depot, Uxbridge.

Coope commanded 87 Squadron from 4th April 1939 and took the squadron to France at the outbreak of war. On 14th November 1939 Coope and Plt Off R L Glyde, in Hurricanes L1628 and L1813, made forced-landings in poor weather at De Panne and Koksijde in Belgium and were interned. They escaped on the 24th and, with the help of the British Consulate, made their way back to France in civilian clothes and rejoined 87 on the 27th.

He was a friend of 17 Squadron's CO, Sqn Ldr. CW Williams, and he spent a week or so with the squadron from 25th August 1940. Between the 26th and 31st Coope flew thirteen operational sorties with the squadron, well qualifying him for the Battle of Britain clasp.

In early 1941 Coope became Wing Commander Flying at Wittering. On a Channel patrol on 15th April he was shot up in Spitfire IIa P7901 by Adolf Galland of JG26. Coope crash-lande at Manston.

He was killed on 4th June 1941 leading 266 Squadron on a sweep. Ten miles southeast of Dover his Spitfire, P8034, suddenly broke away, turned on to its back and spun down. No parachute was seen and it was presumed that Coope had lost consciousness due to oxygen failure.

He is remembered on the Runnymede Memorial, Panel 28.