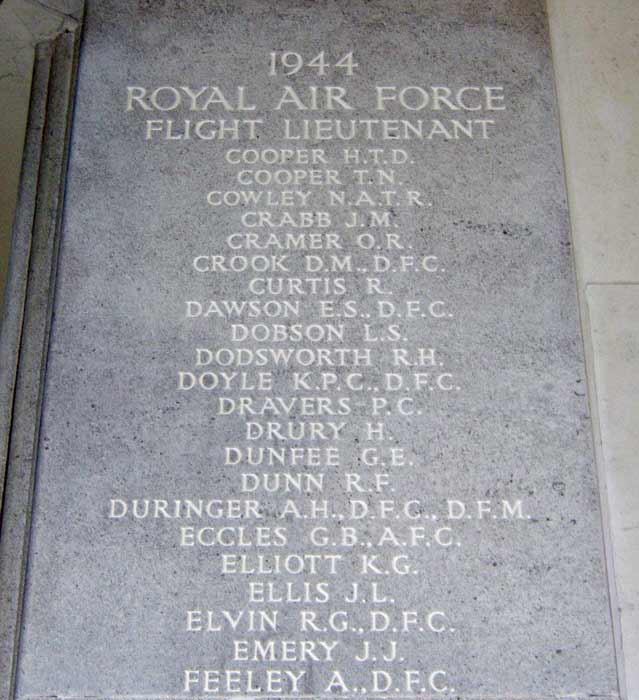 < = expand >
David Moore Crook from Shrewsbury, was born in Huddersfield in 1914. He went to Cambridge University. In August 1938 he joined 609 Squadron, Auxiliary Air Force at Yeadon and had done some flying training before he was called for full-time service on 25th August 1939.

He was posted to 6 FTS Little Rissington on 7th October and after completing his training he rejoined 609 Squadron in May 1940.

On 10th November 1940 Crook was posted to CFS Upavon for an instructor's course, after which he went to 15 EFTS Carlisle, remaining there until April 1944 when he moved to AFU at Wheaton Aston.

In July Crook was posted to AFU Tern Hill, in September to 41 OTU Hawarden and on 1st December to 8 (Coastal) OTU Dyce.

On 18th December 1944 Crook took off in a Spitfire IX EN662 to fly a mid-morning high-level photographic sortie. At 10.52 am HQ 13 Group reported to Dyce that a Spitfire had been seen to dive into the sea near Aberdeen from 20,000 feet. A search of the area picked up some of Crook's flying clothing but he was never found. He may have passed out to due to a fault in his oxygen system.

He is remembered on the Runnymede Memorial, panel 202.