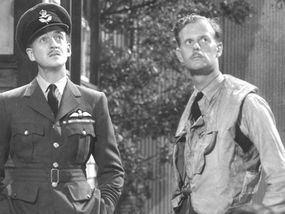 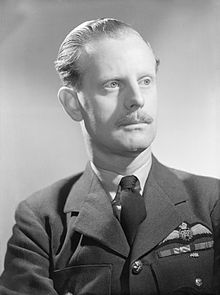 < = expand >
Christopher Frederick Currant, the son of a hatter, was born in Luton on 14th December 1911 and educated at Rydal School.

Currant joined the RAF in 1936 as a direct-entry Airman u/t Pilot. He began training on 6th January 1936 and was immediately given the nickname 'Bunny' which remained with him for the rest of his life.

He was serving with 46 Squadron at Kenley in 1937 and with 151 Squadron at North Weald in 1939, both operating Gauntlets.

Commissioned on 1st April 1940, Currant joined 605 Squadron the same day. On 22nd May he shot down a He111 on a patrol south of Arras. His Hurricane P3575 was hit by return fire and he made a crash-landing, breaking his nose. After burning his aircraft, he made his way to Calais on foot and returned to England by sea. Currant rejoined his squadron at Hawkinge.

When Squadron Leader McKellar was killed on 1st November Currant took temporary command of 605. He destroyed a Me109 on 15th November.

Currant relinquished his temporary command of the squadron on 29th November when the new CO came. He destroyed a Me109 on 1st December.

In early 1941 Currant was posted to 52 OTU Debden and in July he was CFI. A return to operations came on 14th August 1941 when he took command of 501 Squadron at Ibsley. He appeared briefly as himself in the film 'The First of the Few', filmed at Ibsley (See Photo with David Niven)

On Circus 113 to Marzingarbe on 9th March he engaged three German fighters and his Spitfire Vb W3846 was shot up. The instrument panel was destroyed and a bullet struck the back of his head but Currant managed to escape at low level. In great pain he landed at Lympne but his aircraft turned over on to its back due to the undercarriage tyres having been shot through. He was trapped in the petrol-soaked cockpit but was soon rescued from the wreckage. After a month in hospital he returned to flying with fragments of shrapnel still in his head.

He was promoted to Acting Wing Commander in June and appointed to lead the Ibsley Wing. He was awarded the DSO (gazetted 7th July 1942).

He led his wing during the D-Day landings in June 1944 before departing for a lecture tour in America. On his return, he crossed to France to join 84 Group Control Centre working in the tactical air operations centre coordinating ground attack operations in support of the Army.

He stayed in the RAF postwar and was a graduate of the Joint Services Staff College and the RAF Staff College.

Currant then spent three years in Washington on the staff of the Joint Chiefs of Staff. After two years as the wing commander administration at the fighter airfield at Wattisham, and a year at the Ministry of Supply dealing with guided missiles, he left for Norway, where he joined the staff of the Royal Norwegian Air Force Staff College.

At the end of his two-year appointment, the Norwegians asked him to remain for a further two years. On his departure in 1959 the Norwegian government awarded him the Order of St. Olaf.

Currant retired on 11th January 1959 as a Wing Commander and joined Hunting Engineering in 1960, undertaking research and development work on weapons for the RAF. He finally retired in 1976.