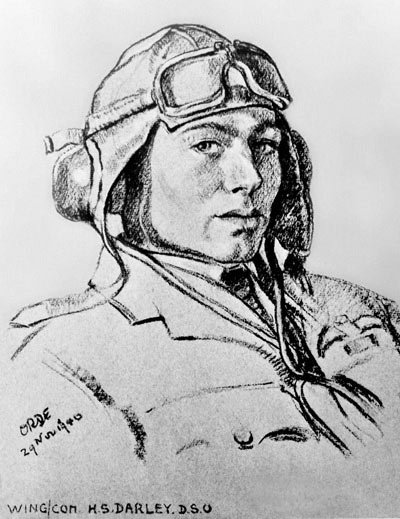 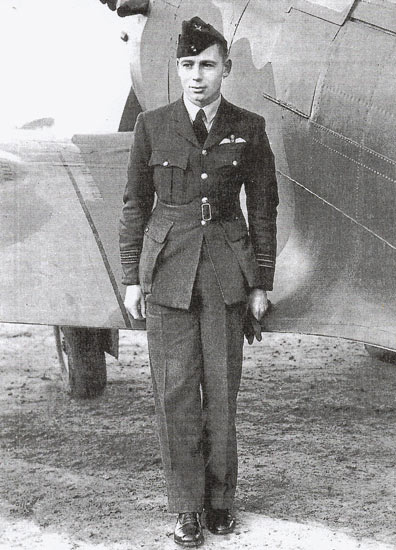 < = expand >
Horace Stanley Darley was born on 3rd November 1913 at Wandsworth, London. He was educated at Emanuel School, Wandsworth Common, where he excelled at rugby, rowing, swimming, fives and shooting at Bisley. He traced his ancestry to the de Derle family, which bred horses for the cavalry of William the Conqueror.He joined the RAF on a short service commission in August 1932 and was known throughout his service as George. He carried out his training at 2 FTS Digby and then joined 207 Squadron at Bircham Newton on 20th August 1933. This was a bomber squadron equipped with Fairey Gordon biplanes.

In 1935 he joined 8 Squadron, a Fairey 111F Squadron at Khormaksar, Aden soon re-equipped with the Vickers Vincent biplane bomber, a more reliable aircraft for patrolling the rugged terrain. When Italian troops occupied Abyssinia, Darley was detached to Somaliland to assist Camel Corps border patrols. He recalled:

We spent nights at unguarded RAF strips, sleeping on camp beds under our wings, pulling mosquito nets around us and hoping to keep roaming lions at bay.

He returned to the UK later the same year.

On 2nd January 1937 Darley went to CFS Upavon for an instructors course, after which he was posted to 7 FTS Peterborough as a Flight Commander. On 6th June 1938 he was appointed Adjutant and Flying Instructor at 602 Squadron Auxiliary Air Force at Abbotsinch, moving on 2nd December 1938 to 611 Squadron AAF at Speke, on the same duties. He was granted a permanent commission on 12th August 1938.

At the outbreak of war Darley was posted to RAF Catterick for administrative duties. He went to HQ 12 Group on 11th September and was sent to Debden next day for controller duties.

On 9th May 1940 he was posted to Merville in France, as Controller with 63 Wing of the Air Component of the BEF.

After returning to England in late May, he went to 5 OTU Aston Down for a refresher course. Darley went to 65 Squadron at Hornchurch on 5th June as a supernumerary Squadron Leader and on the 26th he joined 609 Squadron at Northolt and took command on the 28th.

Darley was posted on 4th October 1940 to be Station Commander at RAF Exeter and promoted to Acting Wing Commander on the 6th. He was awarded the DSO (gazetted 22nd October 1940).

He went to Air HQ Singapore on 17th May 1941, engaged on Fighter Defence as well as liaising with the Americans in the Philippines and the Dutch in Java. He was returning from a Burma inspection aboard an Imperial Airways flying boat on 8th December when the captain announced that Japan had invaded Thailand.

Unable to refuel at Bangkok, the flying-boat returned to Rangoon where Darley and his passengers transferred to a longer range flying boat bound for Singapore. They arrived there as Japanese aircraft were sinking the battleship Prince of Wales and the battle cruiser Repulse off Kuantan, Malaya.

On 7th January 1942 Darley organised an RAF withdrawal from Kuala Lumpur, Malaya to Singapore in the face of the advancing Japanese. After arranging destruction of the airfield he attached an explosive booby trap to the chain of his office lavatory.

When the withdrawal from Singapore began on 27th January, Darley established a fighter operations centre at Palembang on Sumatra and organised Hurricane sorties until Palembang became indefensible. After surviving a road ambush Darley boarded a merchant ship, which though ordered to Australia, altered course to India at the whim of her master who explained that he and his crew had been away from their home port of Glasgow for far too long.

He arrived at RAF Depot Karachi on 16th March and was posted to command 151 OTU at Risalpur on the NW Frontier.

Darley was appointed Station Commander at RAF Risalpur on 7th October 1942. He was there until 7th February 1943, when he was posted to 221 Group Calcutta. On 11th June he returned to Risalpur, again to command 151 OTU there.

Darley returned to the UK in July 1944 and was given command of 62 OTU Ouston.

He was made Station Commander at RAF Cranfield on 15th June 1945 and went to RAF Staff College for a course.

In 1948, after briefly commanding West Malling in Kent, Darley was seconded for two years to the Indian Air Force to establish a staff college. He returned to West Malling to supervise the transition of four fighter squadrons to Vampire and Meteor jets.

In 1952 Darley was appointed director of overseas operations at the Air Ministry. He was heavily involved in security measures and overseas visits to combat Mau Mau troubles in Kenya and Communist terrorism in Malaya.

In 1954 he was appointed CO of 4 Flying Training School.

Finally, he was posted to Singapore as chief intelligence officer in the Far East Air Force returning in 1956. He retired from the RAF on 15th June 1959 as a Group Captain.

Darley was working on Special Duties at the Air Ministry, as a civilian, until his final retirement in 1973.