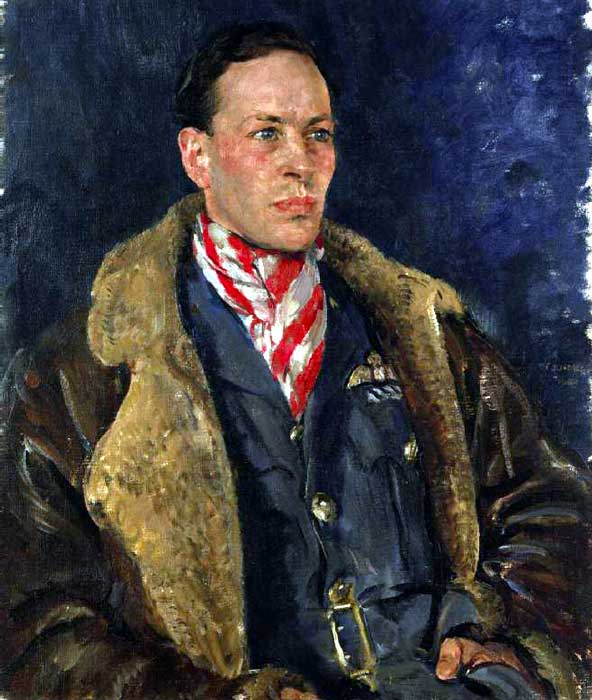 < = expand >
George Lovell Denholm was born on 20th December 1908 at Bo'ness, West Lothian, the son of an importer of props for coal mines. After Fettes and St John's College, Cambridge, where he read Economics, he served briefly in the Territorial Army before switching in 1933 to 603 (City of Glasgow) Squadron of the Auxiliary Air Force.

603 was then equipped with DH9A biplanes. By the time he took command of 603 in June 1940 it was equipped with Spitfires and stationed at Drem in Scotland. At 32, Denholm was considered to be rather old by his youthful pilots and they christened him 'Uncle George'. However it was Denholm who had shared in bringing down a He111 on 16th October 1939, the first German aircraft to be brought down on UK soil in WW2.

On 12th March 1940 he damaged a Do17 off Aberdeen. On 26th June he claimed a probable He111, on 3rd July a shared Ju88 plus a Me109 destroyed and another probable on 28th August. In combat with Me110's over Deal on 30th August Denholm was shot down and bailed out, his Spitfire L1067 crashing at Hope Farm, Snargate.

On 1st September Denholm claimed a Me109 damaged, on the 15th a Me109 and two Do17's damaged, the last engagement resulting in him being shot down, his Spitfire R7019 crashed at Warren Farm, Fairlight while he came down at Guestling Lodge.

Denholm was awarded the DFC (gazetted 22nd October 1940). He relinquished command of 603 in April 1941 and was posted as Fighter Controller to the Operations Room at Turnhouse. He was on duty the night that Rudolf Hess landed in Scotland. On 15th December 1941 he took command of 1460 Flight, then forming at Acklington with Turbinlite-Havocs. He moved from there in March 1942 to take over 605 Squadron at Ford.

One of Denholm's pilots in 603 had been Richard Hillary, whose memoir ‘The Last Enemy’ (1942) reflected the esteem in which 'Uncle George' was held. On 18th January 1943, Hillary was killed with his navigator when their Blenheim spun into the ground at night. He was cremated at Golders Green and Denholm scattered his ashes from a Havoc over the English Channel.

On 11th March 1943 he shot down an unidentified enemy aircraft over Gilze-Rijen in Holland on a night intruder sortie. He was awarded a Mention in Despatches in 1945 and released from the RAF in 1947 as a Group Captain. Afterwards he resumed the family business.