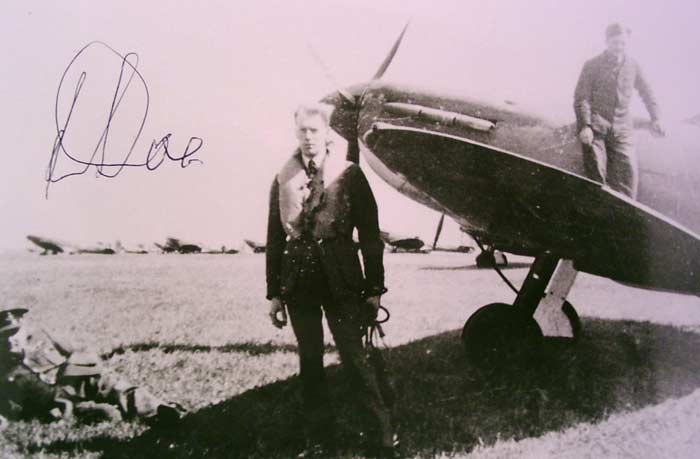 < = expand >
Robert Francis Thomas Doe was born in Reigate on the 10th March 1920 and educated at Leatherhead School. Shy and not enjoying robust health, he left school at 14 to work as an office boy at the 'News of the World'. He joined the RAFVR in March 1938 and started his training at 5 E&RFTS at Hanworth in Middlesex. He was awarded a short service commission in the RAF in March 1939 and completed his training at 15 E&RFTS Redhill and then 6 FTS at Little Rissington. He was posted to 234 Squadron at Leconfield on 6th November 1939 the squadron, equipped with Spitfires, later moving to RAF St Eval in Cornwall. During the early phase of the Battle of Britain he flew convoy patrols. On 14th August 1940 234 Squadron was ordered to RAF Middle Wallop in Hampshire and the next day Doe destroyed a Me110 and shared another. On the 16th he destroyed a Me109 plus a probable Do18 flying boat. On the 18th August his score was one Me109 destroyed and one damaged, on the 21st a Ju88 shared and on the 26th another Me109 destroyed.

His next claim was on 4th September with three Me109's destroyed followed by a Me109 destroyed and three Do17's damaged on the 6th, then a He111 destroyed on the 7th.

Doe was posted as a Flight Commander to 238 Squadron, also based at Middle Wallop, on 27th September. Now flying a Hurricane, he claimed a He111 destroyed on the 30th, a Me109 destroyed on 1st October and a Ju88 destroyed on the 7th October.

On 10th October Doe was shot down as he came out of cloud, he baled out and landed on Brownsea Island, wounded in a shoulder and a leg. His Hurricane, P3984, came down near Corfe Castle. He was taken to Poole Hospital and recovered in time to rejoin 238 at the end of December. On 3rd January 1941 he was on a night patrol over the sea and above cloud at 25000 feet when his oil cooler became frozen. Descending towards Warmwell, the engine stopped at 6000 feet and he made a high speed glide approach. On landing on the snow covered airfield his harness broke and he was thrown forward, breaking an arm and severely damaging his face on the gunsight. The treatment for this involved 22 operations over the next few months, these being carried out by the New Zealand surgeon Harold Gillies at Park Prewett hospital near Basingstoke.

Returning to active service, his first posting was to 66 Squadron at Perranporth on 15th May 1941. He damaged a Ju88 on 1st June. Service with 130 Squadron at Portreath from 18th August 1941 to 22nd October 1941 completed his tour of operations and he was then sent to instruct at 57 OTU Hawarden. On 9th June 1943 he attended the Fighter Leaders School at Milfield and was then posted as Supernumerary to 118 Squadron at Coltishall. In August 1943 he was with 613 Squadron, working up to a posting to Burma, where they arrived in October. In December 1943 Doe was tasked with forming from scratch No. 10 (Indian Air Force) Squadron and he went on the command them most successfully throughout the campaign against the Japanese, leaving in April 1945 with the Indian DSO (gazetted 2nd October 1945). He attended the Staff College at Quetta and then returned to the UK in September 1946.

Deciding to remain in the RAF post-war, Doe held appointments with the Royal Auxiliary Air Force and then in May 1950 was sent to command 32 Squadron, operating Vampire jets in Egypt. A posting with the Fighter Gunnery Wing as a senior instructor was followed by staff appointments including two years with the Chiefs of Staff Office. He retired on 1st April 1966 as a Wing Commander and died at his home in Crowborough, East Sussex on the 21st February 2010.