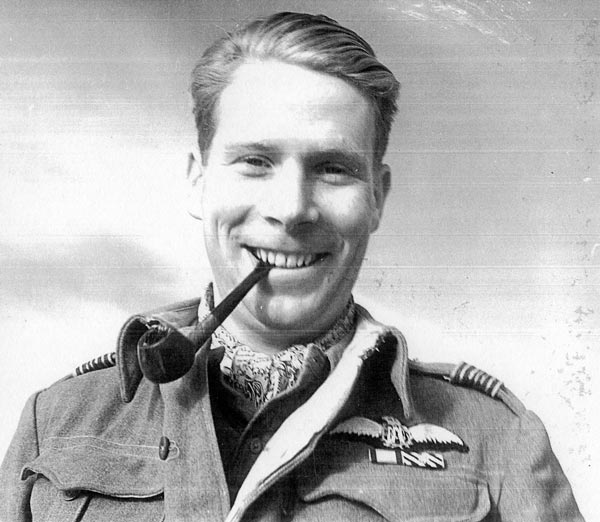 < = expand >
Billy Drake was born in London on 20th December 1917 and joined the RAF on a short service commission in July 1936. He was posted to 6 FTS Netheravon on 19th September and after completing his training joined No. 1 Squadron at Tangmere on 22nd May 1937.

Drake went to France with the squadron in September 1939. On 20th April 1940 he destroyed a Me109 and possibly another, on 10th May a He111 and on 13th May he shot down a Do17 and probably another but was jumped by Me110's and shot down. He baled out, wounded, over Perthes, south of Paris. He was taken by French civilians to hospital in Rethel from where he was later flown back to a RAF hospital in England.

He arrived at 6 OTU Sutton Bridge on 20th June 1940 for flying instructor duties. Drake returned to operations when he was posted to 213 Squadron at Tangmere on 2nd October 1940. Three weeks later he joined 421 Flight at Hawkinge as a Flight Commander.

On 7th and 27th December Drake shared in the probable destruction of two Do17's and on 7th January 1941 he damaged two Ju88's.

Drake was next posted to 53 OTU Heston in February as an instructor. He went overseas in early October to form and command 128 Squadron at Hastings in West Africa. On 13th December Drake shot down a Vichy French M-167F near Freetown.

In January 1943 he was promoted to Wing Commander and posted to HQ RAF Cairo. He took command of the Spitfire Wing in Malta in June 1943 and before returning to the UK he was credited with another six enemy aircraft destroyed.

Drake was appointed Wing Leader of 20 Wing, operating Typhoons, in late November 1943 and in May 1944 he was sent to America on special duties. Back in the UK, he was made Deputy Station Commander at Biggin Hill and later went to HQ SHAEF to serve in the Operations Room.

He took part in the first Battle of Britain flypast in September 1945. Drake retired from the RAF on 1st July 1963 as a Wing Commander, retaining the rank of Group Captain.

Drake settled in the Algarve area of Portugal but returned to Devon in the UK some years before his death on 28th August 2011.