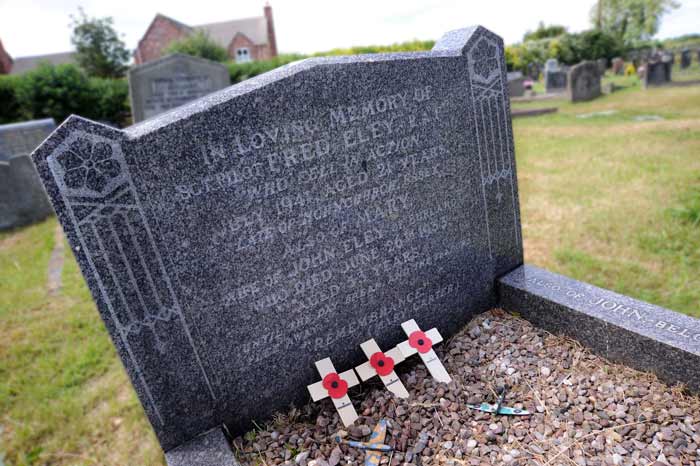 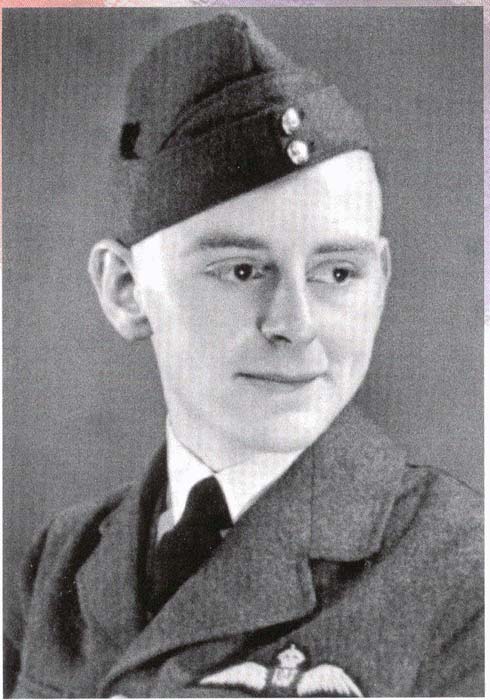 < = expand >
Frederick William Eley was born on 14th May 1919 and in his early years lived a few miles from Wrenbury, south Cheshire at Cholmondeston Hall Farm, near Wettenhall, where his father was a dairy farmer.

The business failed, Fred's mother died and he went to live with the family of his cousin Brian George, seven years younger than Fred, in Aston, another nearby village. Both boys went to Nantwich and Acton Grammar School, popularly known as "NAGS".

From the 1930's this nickname was marked with two horses on the school badge. On leaving school Fred joined Lloyd's Bank, working first in rural Shropshire at Church Stretton, under the Long Mynd and then, in considerable contrast, at Burslem in the Potteries. The rules of the bank demanded that, in both cases, Fred had to lodge near his work and Brian's father supported him financially. It was while in Burlsem that Fred met his girlfriend, Nancy.

He had always been interested in aviation - Brian George feels that he might eventually have made his career in the RAF even if war had not come. Brian later qualified as a dentist.

In the spring of 1939 Fred joined the RAFVR at Tern Hill, near Market Drayton. He was called up on 1st September 1939 and, training completed, was posted to 74 Squadron at Rochford in Essex. Apart from a brief spell at Leconfield the squadron would alternate between Rochford and Hornchurch until August 1940.

On July 8th, one of Fred's fellow Sergeant Pilots on the squadron, Edward Mould, was credited with the first German fighter to come down in Britain. The Me109, flown by Leutnant Johann Boem, forced-landed on Bladbean Hill outside the village of Elham, near Folkestone.

It was not until 31st July that 74 lost pilots in action in the Battle of Britain. This was a day of Luftwaffe attacks on shipping and on the Dover balloon barrage. In the late afternoon 74 engaged Me109's over Dover. In the resulting fight the squadron suffered three casualties. Plt Off Gunn was killed, his body being recovered by the Germans and buried in Belgium and Flt Lt. Kelly returned to Hornchurch uninjured, but in a badly damaged aircraft. Fred Eley's Spitfire P9398 went down burning off Folkestone harbour. It seems he was the victim of the vastly more experienced Oberleutnant Horst "Jakob" Tietzen, a veteran of the Spanish Civil War.

Boatmen and service personnel brought the British fighter ashore and Fred's body was recovered from the cockpit. Brian George remembers clearly the moment he learned that his cousin was gone. The school holidays had started and he was in the garden with his father. His mother came out of the house holding a telegram and crying.

Many local people attended Fred's funeral and there was an RAF flypast. "Jakob" Tietzen survived less than three weeks longer than Fred. On 18th August his aircraft fell into the sea off Whitstable, probably shot down by Plt Off Zenker of 501 Squadron. Six days later Zenker himself was killed. Tietzen was posthumously promoted to Hauptmann.